Inpired by GoLow’s Hocus Pocus I have discovered a lot of new (for me) stuff about the physics of circular motion.
Lets view the picture again. 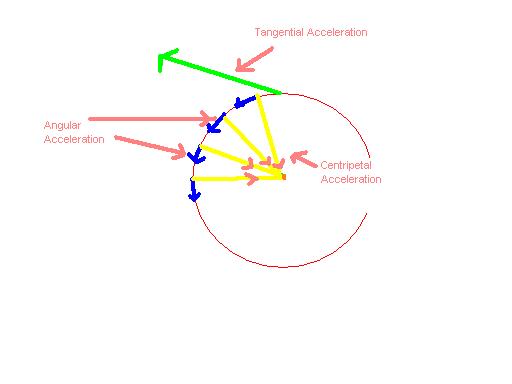 Its amazing how scientifically sound the ABS motion curriculum is. Kudos to Lag. The following youtube vids are some math tutorials with the guy not talking about golf at all. I know there are quite a few engineers, Captain, Steb you can take over from here.
But basically the guy in absolute mathematical certainity is showing that there are two types of circular motion; one with constant acceleration and constant velocity; the other with variable (in our case , increasing) velocity which may be achieved by either constant or increasing tangential velocity. But and this is the big But in order to maintain the circular motion the centripetal force has to increase by a factor of around 20 (if I remeber from the video). That will be the inward traction on the wheels in case of an accelerating car around a corner and our hands and massive pivot in case of the golf swing. In the absence of this massive increase in centripetal force both the car and our golf swing will be toast.

Thanks Macs. I am not a physicist, so that was new to me.

Accordingly, I probably do not understand it properly. I don’t know if the yellow book addresses any of that, but I would think there are important implications that relate to hitting vs swinging… because in swinging, one lets, or augments, the radius lengthening(thus decreasing centripetal acceleration), whereas in hitting, you fight it, and increase acceleration. And acceleration is something we want.

http://www.youtube.com/watch?v=U9v7kDbK8Eg&feature=channel
I think the last lecture is more important from our perspective.

Eagle
I think this is very important. In swinging we accelerate at the expense of letting the projectile leave the radius of circle. In hitting too, we can only accelerate club head speed by increasing tangential acceleration (not centripetal acceleration— centripetal accelaration achieves the change in the angle which is happening constantly… otherwise we loose the circle).
But for every increase of tangential accelration the centripetal force/acceleration needed to keep the projectile in its circular orbit must increase by a staight forward mathematical power of 20. Thats is the incidental genius of Lag’s teaching without knowing the formuala. He has always been saying that module 3 needs to be much stroger than module 1. Only now we know by how much. This is the reason our pivot may not be able to generate 20 times the centripetal force if we acclerate too early (tangential) especially with the driver and we swing instead of hit and beg for timing.