If Arnie were really King!

Love the Gamma Fire insert on the left…

If Arnie really were King, I think we would still be hitting persimmon.
" I can’t do with Metal what I could with the wooden clubs"

I sense he is a lot more disgruntled than he is letting on.

Arnie was a prominent (and paid) supporter of the Callaway ERC driver…perhaps the first club to really push the USGA limits on the “spring like effect” rule.

He’s got the right ideas with respect to the ball and the anchored putter, but he blew it big time with that one.

I agree, people don’t often like to admit they were wrong. I see this over and over regarding this topic of the ball flying farther.

It’s not just the ball…

I don’t hit the modern ball much farther than a balata of persimmon. Bradley doesn’t think he hits it any farther with a persimmon driver. I think it might be 1/2 a club hotter off my irons.

The problem is with the drivers. The big heads allow the players to swing much harder at it even with the shaft being much longer. The technology has advanced in creating lighter materials to allow a 46 inch driver with a huge head to be 11 ounces.
Then of course, the springboard effect working in tandem with the composition of materials in the ball.

Re: PGA Player E-Mails from 2006 about equipment

"…I have to ask when are we going to right this ship? In every other sport that involves a ball there is a standardization for that ball. That’s what gives these other sports their integrity. The reason for this is ‘to maintain the credibility and integrity of the sport and ensure that scoring is based on individual skills and effort as opposed to artificial means’.
Some ‘Executive Players’ on the PGA tour today are being fitted exclusively for ‘Face Give’ + "Golf Ball Core Give’ all based on a ‘certain individual’s specific’ clubhead speed. After these ‘executive players’ have been fitted, manufacturers are manufacturing ‘their balls’ for them and then doling out the same ball to other ‘professional players’ and leaving many players to make due with these specific tailored balls that really don’t fit them as ‘other professional golfers’. If only every player could have a golf ball manufactured for them individually!!
Does anyone remember the illegal Browning Reflex irons in the 1970’s? The face on these irons had give and thus the USGA banned them. Thanks in large part to the ‘King’s’ endorsement of clubs like them a number of years back, the original founded position was overturned. Face give, according to the ‘King’ was going to make the game more enjoyable for the average golfer. Little did he know that what was going to make golf more enjoyable for the ‘average golfer’ was also going to ruin the integrity of the sport at the professional level. The USGA reversed their decision because of his endorsement and this alone has led to a tremendous amount of innovation…(what will they think of next?)…
These are my beliefs based on my professional experiences and I should be entitled to that opinion. What we are witnessing today on the PGA Tour, which is really sad by the way, is a group of select individuals that are now armed with a ‘man made slingshot’. This slingshot has cost a hell of a lot in expenditures to many golf courses across America (world) and many of these expenditures are a direct result of these decisions and some of the greatest championship golf courses are right now ‘obsolete’
How many times in the past 6 years have they redone Doral ‘The Blue Monster’??..Augusta National…how many times have they had to change that course??

To give a frame of reference for performance…with a driver the difference in carry distance between a head of COR 0.820 and another head with a COR of 0.830 would be 4.2 yards for a swing speed of 100 mph. It is true that as swing speed increases the distance is greater. And likewise as swing speed decreases the distance difference for each increment of the COR measurement is less. This is one reason why the USGA rule which limits the COR of a clubhead has the effect of penalizing the slower swing speed golfer much more than the high swing speed player.
Instead of penalizing a lack of skill…let’s penalize a lack of strength!!! Let’s give the ‘big ball bashers’ who already have an advantage with strength and let’s ‘exponential’ it and 'further…let’s bring back the 'gimme and mark some players putters at 18 inches and others at 24 inches…let’s disqualify a player for ‘building a stance’ by putting a towel down to keep tree sap off his pants and outlaw a bulge and waist paddle putter grip,… but let’s go ahead and allow people to ‘chin putt it’ and ‘belly gouge’ it in order to build the perfect grip… I’m laughing so hard I’m crying or am I crying so hard that I’m laughing? Which way is the bar?..I’ve had it with all the ‘innovation’. You fellows at the USGA are welcome to join me…the double dry martinis with a twist are on me!!"

Would think this is what you are referring Dukeman, did not know there was an original reflex iron set and overturned the rule. Arnie would have been doing this to get more players in the game, love of golf not money you would think because he was worth over 100 million then. He is just like all of us here, we have garages, racks, boxes or whatever full of old irons and persimmons, he just has a warehouse. Golf gave him everything and he gives everything back to it, regular guy that got to play because his Dad worked at the course. Knows he was lucky to be able to play, and I think he wants everybody to have the same opportunity. Rules for pros and amateurs would have been the solution.

I’m rippin it with persimmon, haven’t lost hardly any distance with it compared to Titanium and it keeps getting better since I’m not stalling my body through the shot thanks to what I’ve learned on here and watching Brad’s videos… It’s fun when my friends who are scratch to plus are long and in the trees and I’m in the fairway… Just takes more effort to work the new golf balls… Quite a few people want to hit them and are pleased but too afraid to change… 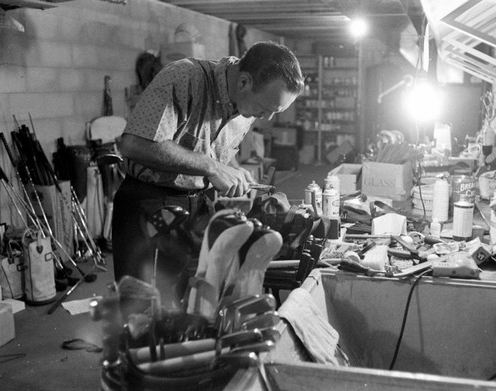 This picture really says a lot if you think about it…

This picture really says a lot if you think about it…

most pro’s today, if any know how to work on their clubs. Most of them just go to the tour van and get someone else to work on it for them. There is just a different experience when you put in the hard work and work on your clubs yourself. You get to know them better and constantly make adjustments. I dont know how you could ever let someone else touch your clubs.