How to Remove offset from an Iron

Is that how you do it by bending the top half of the hozel and bending the bottom half back to the original loft? or is this just a good starting point? The picture you posted as an example looks great…

Yes, this is how you do it…

Now, of course there is also a bit or artistry in it also… getting them all to look right. I just figured this out last year by accident when bending some sets and looking down at them and seeing all these differences in the amount of offset that was looking back at me. I had to take notice of where I was bending on the necks. The great thing about the older MacGregor stuff, Spalding and Wilson too, is that they had these long necks… so which makes it SOOOOOO much easier. All the modern irons now seem to have these little short necks, and I would even through Hogan stuff into that category. Personally, I am moving away from Hogan gear, even though I really like some of the head shapes, but the heads are much lighter than the MacGregor stuff, so you have to lead tape the hell out of them, and they are harder to remove the little bit of offset that I don’t like at all.

If we go by Tom Wishon’s account of how Hogan had his personal gear set up, then we won’t see that kind of golf club coming out of his factory for public consumption, even in the 1960’s through the 80’s. MacGregor stuff is going to get you closer or into a more workable club with a bit of fiddling around.

I certainly don’t know everything, but I feel I am slowly figuring things out over time.

I think I need to watch this vid a few more times…and/or bend some clubs to make sure I’ve got it…The vid leaves me with the impression that this club tweaker is kinking/curving the necks…I might need to bend them exactly the opposite way to make them straight and have the offset go away.

Bend it super weak up high,
then bend it back very low on the neck.

I remember bending some of my clubs and they ended up getting a kink look to them but only in lie angle not really offset or such…got me thinking of how Hogan’s clubs always tended to look… then I found this old 1975 picture of Tom Watson and low and behold it looks like his club has been bent or altered in such a way also.
When you see this visual bend in the club in that direction is that a good sign that they were flattened down in lie angle…as that’s what my Hogan’ clubs tended to end up looking like when i flattened them 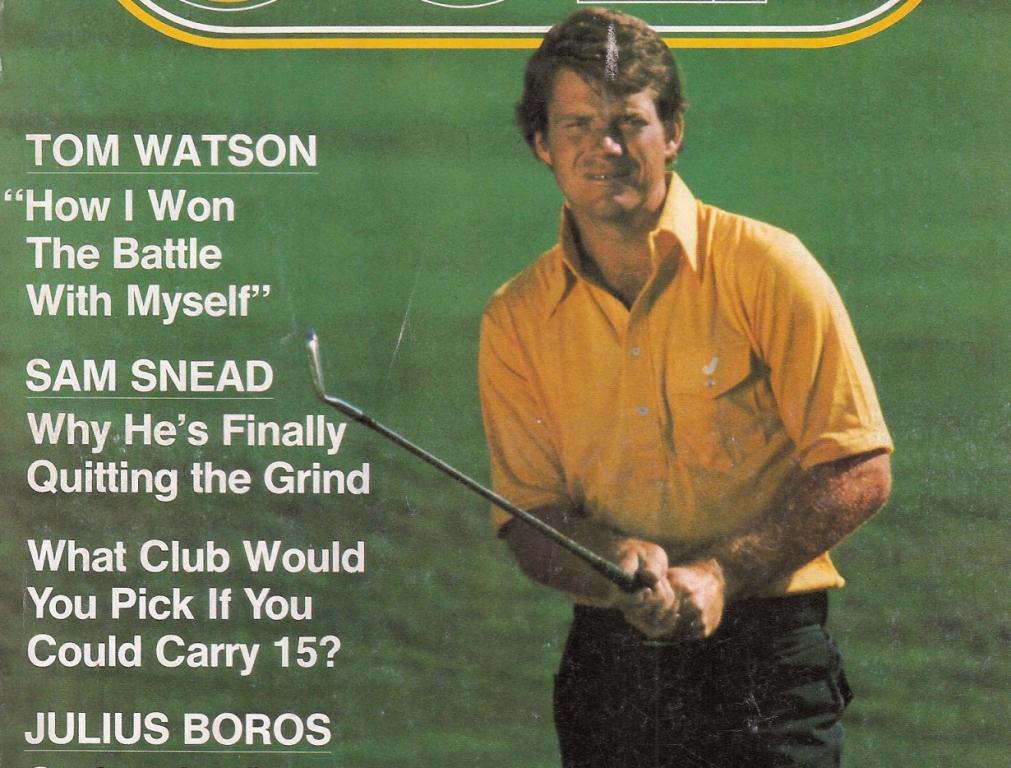 Would there be any possibility of offering an offset-removal service?

For instance, if someone was to send you a set of clubs you could remove the offset for something like $20 a club?

Lag,or anybody,I am no clubmaker just like to tinker.I bought a mitchell just like the one in the video,when I bent my irons to look down the shaft to the third line it looks like a big goose neck.I have a set of kenneth smith zo blades chucked them in to check,say like a 9 iron,then remove and put a wilson or macgregor in and bent the best I could to match the readings on the kenneth smiths. to make a long story short they look like crap.plus I only have one bending bar.I wish I had a cam may be somebody could tell me what I am doing wrong. Thanks

Shoot me an email, we can discuss your set. In all honestly, some sets can go quicker than others. Really depends on where they are, how much offset there is now, the softness of the forging, how long the necks are, what kind of ferrule you have… and how they sit in my Van-L vice. I have got pretty good at it will all the sets that have come through here. Having my own bending vice has been great because I can really tweak them carefully so they sit right to my eye… and I can test out the ball flight right off the deck about 15 yards away. So, it all depends, but it might not be quite that expensive.

Even though the process is fairly simple I found that it might take some time to get the hang of it. The longer the hosel of the club, the easier it will be to remove offset.
First you need to bend the loft of the club about 5 degrees weaker. This bend operation must be performed by placing the bending bar at the top of the hosel (where the shafts meets the hosel).
Then after that you need to perform a ‘regular’ bend operation, just above the clubhead. Bend the loft back to its original strength.
Now have a look and see if the amount of offset is less than before. You will probably have to repeat these steps a couple of times before you will get good results; but it will be well worth it in the end.

It’s a lot of back and forth in and out of the vice… you certainly need to know exactly what you are looking for… and then be able execute. Not so dissimilar to hitting a golf shot.

Tried removing the offset from some M85 Irons, but didn’t really get anywhere. It seems like the club was just bending back and forward in the same place down towards the heel. Not sure what I could have done any differently really. My bending bar is about an inch wide and the overall length of the hosel is 66mm, not the longest or shortest either. Any Ideas?? 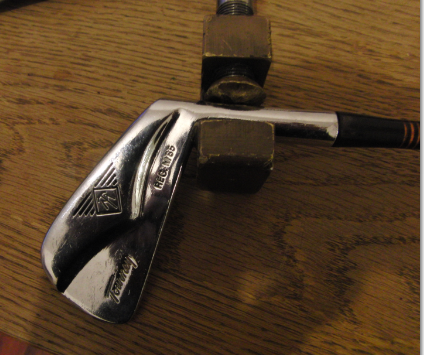 Pretty sure the problem is a combination of too short a hosel and too wide a bending bar. Looks like there is nowhere to get the double bend in when you take into account how far the shaft will go into the neck.

Anyone want to buy a nice set of M85s? Stiff shafts, bent flat and weighted.

My bending bar doesn’t have that rounded clamp down disc. Might be an issue.

Tried removing the offset from some M85 Irons, but didn’t really get anywhere. It seems like the club was just bending back and forward in the same place down towards the heel. Not sure what I could have done any differently really. My bending bar is about an inch wide and the overall length of the hosel is 66mm, not the longest or shortest either. Any Ideas??

Has anyone tried 2 people and two bending bars simultaneously in opposite directions? Kind of looks like they might be doing something similar in the beginning of the vid…Just a thought

I had thought about that, but obviously Lag and IOZ have managed to do it with just the 1 bar. With my bending gear, you wouldn’t be able to get 2 bars in at the same time, you would need the narrrow width bars that they mention in the vid. Am going to have another go with more emphasis on pushing and pulling at the same time.

I had thought about that, but obviously Lag and IOZ have managed to do it with just the 1 bar. With my bending gear, you wouldn’t be able to get 2 bars in at the same time, you would need the narrrow width bars that they mention in the vid. Am going to have another go with more emphasis on pushing and pulling at the same time.

NRG,
As lag suggested; your type of bending bar may be causing the bend to be less precise.
I’m pretty sure that it should work, and that hosel looks long enough too. Remember to do a really big bend near the ferrule ( loft = maybe 8 degrees weaker), and then you’ll find that you’ll need a smaller bend at the bottom to get it back to the original loft. Do this a couple of times until you see results.
And yes, the push-pull move also makes for a more precise bend IMO. Hope it works.

Cheers IOZ, just about happy with that. 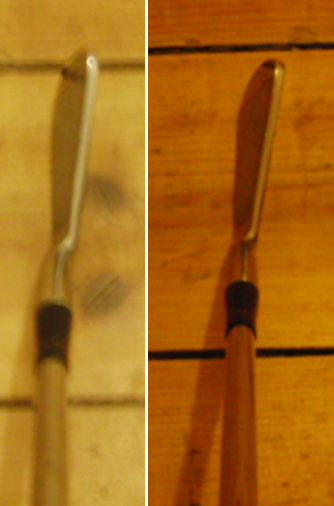 You have to pay real close attention to which part of the bar is grabbing which part of the club and attack the bend from various angles. I had to dismantle and adjust the set-up of my machine a bit too to make space for the bar down the bottom of the neck.

That looks spot on… good job.

Offset on your clubs will do nothing but damage your golf swing if you are working toward using a proper hitting protocol.