How Iron Byron worked the ball..

A good friend of mine who toured with the Senior Tour as was a club builder and repair guy for the likes of Chi Chi, Trevino and many other greats told me this years ago… He was testing out equipment on Iron Byron, if you’d put the face in a closed position (my merely turning your hands, and not changing your grip) the ball would cut… If the clubhead was open, the ball would draw… This really works only if you have your gear set up properly to begin with… The best thing about the draw is it doesn’t lower the ball flight if you need to hit a high soft draw… If the pin was cut front right, I can cut it into the middle of the green, and it spins back and right to get to the flag… Don’t change your grip, set the clubhead squarely behind the ball, then merely manipulate the clubhead by turning your hands… Good stuff… Works for me anyway…

Interesting. When do you aim the square (or manipulated) clubface and what do you aim it at?

Interesting. When do you aim the square (or manipulated) clubface and what do you aim it at?

Depends on the pin… If it’s cut right, I’ll aim just left of middle of the green then shut the clubface without re-gripping, same with the draw, aim right center then open face… The key is not to re-grip the club… Works really well off the tee also if you want to hit shot into a crosswind… You don’t have to change your swing at all, that’s the beauty of it…

Don’t change your grip, set the clubhead squarely behind the ball, then merely manipulate the clubhead by turning your hands… Good stuff… Works for me anyway…

Thanks for sharing fontaine…I’ll check it out…I’ve never heard of that before.

Hmm, that is interesting because most instructors tell you to open/close the face first, then regrip it. They don’t want you to merely move the face open/closed without regripping. In this case you are move the face with hands without regripping but are doing it in the opposite way (closed for a cut, open for a draw) than most people think they should or have been told (open for cut, closed for draw). I guess it’s because the hands want to naturally get back to square so the face would be moving from closed to square to open to cut it. Or in the other case, from open to square to closed to draw it.

Seems like it’s counter intuitive and you would be a double crosser but if it works for you, it’s a pretty simple way to move the ball.

Next time I’m out, I’ll give it a try. Something about doing things against the grain that appeals to me. Might be why I’m on this site.

Oops. I didn’t read post #1 correctly. I thought I was getting a tip from a master, not from a robot!

Interesting, any idea on the science? iron byron cant manipulate his hands through impact, he just holds on.

This is something he told me years ago, so I don’t have any science behind it, but it worked and still works like a charm… Iron Bryon swung on a 45 degree angle, which is ideal… Maybe it’s a mind thing if you hood the face and your hands open the clubface back open through the ball and just the opposite with the the draw? I hate seeing the ball go low and right to left unless I need it to… What was said about instructors and how they teach to work the ball, well, I found with fading the ball it can work fine, but the left to right logic will decrease loft on the club… I really doubt anyone on ABS likes a low hooking shot… That’s what’s great about the draw shot with opening the face, doesn’t deloft the face and with the right gear, you’ll have a higher ball flight so the ball doesn’t run out of control… Tiger even stated when he wants to hit a high draw he just opens up the face a little and it reminds him to get the clubface closing a little through impact… (With his irons I imagine) cuz he can’t hit a bull in the ass with a bag of rice with his Driver…

There are a lot of ways to draw and fade the ball… some better than others. I think it is critical to be able to both draw and fade the ball at will. However, I have seen some very good golf played by one dimensional players that can only shape it one way… but over the long haul I think that is very limiting. I feel equally proficient drawing or fading. Once the basics are in place and one can hit a relatively straight ball, then drawing and fading become easy stuff. It should be harder to draw the ball than to fade the ball. a lot can be done with how one sets up their gear… and of course their swing. My approach toward shaping the ball and what I teach students here has nothing to do with changing anything in the set up… the stance, backswing or even downswing. It’s all done with post impact intentions.

I’m a big believer in what I call the gear effect.

I played several times in tournaments with Corey Pavin. I have never seen anyone apply this principal as dramatically as he did. Very inspiring… and I could see that was the correct way to do it. 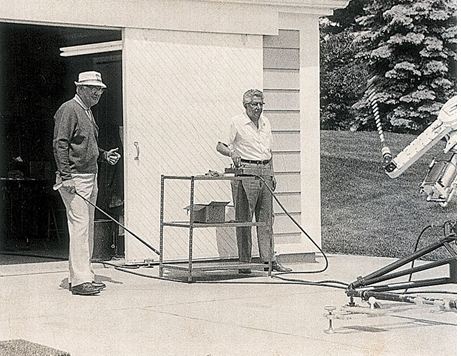