How do your equipment specs vary from Lag's?

I have seen Lag’s equipment specs, but was wondering what other people have done that they like.
For instance I am 6’3 and I now set up my pw at about 4 degrees flat but my long irons are maybe a degree flat, so the average change in life angles between clubs is less that the standard half degree.
Also I like to get the irons bent weak. I don’t minda little extra bounce and it works some offset out of the set.
Now I am not an abs student so that may be why my preferences vary from Lag’s, maybe the rest of you just play the same specs as him. But whoever had found other set up ideas that worked I would love to hear them

Here are my specs.

Here are my specs.

Thanks for the post. I have a 975r driver I meant to re shaft but never got to it. Why only 12 clubs? Would an extra wedge or long Club not help?
Also has that progression of the moi been helpful to you? I have yet to know the moi of my clubs. Is it worth getting that checked and having the set matched up? I am just curious because I only have been concerned with sw.
Thanks in advance for any info

I used to carry a gap wedge and a 2 iron, but I hardly ever used them so just left them out to keep the weight of the bag down.

I like MOI matching, but its possibly just a placebo. I like having the lower MOI in the driver cause I think you have more chance of doing a CP release with a lower MOI, I think most 11oz frying pans are up around 2900 because of the 46" length, so mine is just 42".

I’ve been asked why I don’t play my Titanium driver as flat as my persimmon driver - 55 degrees v 48.

When the club is in motion (or at least when the shaft releases) the shaft is not straight as the shaft tries it’s best to line up with the clubheads centre of gravity. Resulting in toe dip.

The COG gets further away from the shaft as the clubhead size increases, so the toe dip also increases. Smaller hosels etc move the COG further away too. 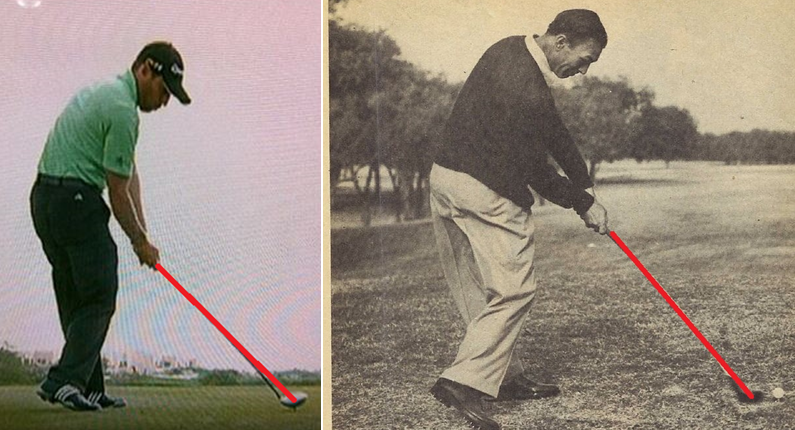 Bigger heads get more toe dip than smaller heads due to the COG being further above the shaft line so need to be set up more upright.

So I don’t recommend getting Titaniums drivers flattened any more than about 52 or 53. 55 is fine.

NRG,
I also noticed your 42 inch driver is on the lighter side.
Could a low MOI still be achieved if a heavier driver was back weighted quite a bit?
Thanks

It’s about an ounce heavier than a modern driver. I didn’t decide to make it like that, just kept cutting it down and adding weight till it felt about right. Will no doubt tweak it again soon.

Shaft length really effects MOI. Long shafts will have a much higher MOI. Adding weight under the grip will not reduce MOI, it will add a small amount, but no where near as much as on the head. MOI doesn’t work the same as a swing weight.