Time for some ABS fun courtesy of Rat Land.

Anyone care to step up to the plate and take this one on? If you look closely you’ll see something that captures it all- intention, feel, positions, saving R arm, R wrist position @ P4, narrow entry and steep exit, angled hinge, increasing knee flex…just about everything one could ask for- all in one dynamic movement based on the intention.

It’s there if you know where to look. Can someone bring the following video over to ABS?

You’re thinking about this position? If you play guitar you will know the feeling of the strap of the guitar tugging against your back when you hold the guitar in P4 position, preferably at the end of a solo or song

There’s lots of parallels between golf and playing guitar. But that’s for another post I guess. Great find RR!

Great job IOZ…I didn’t see that one! I only play air-guitar but Eddie Van Halen’s position certainly gets close to capturing the feel of P4…but what about the rest of the dynamics and positions.

What about an overall intention that presents and captures those positions and feel…the entire enchilada…from takeaway to finish in one fell swoop.

Great job IOZ…I didn’t see that one! I only play air-guitar but Eddie Van Halen’s position certainly gets close to capturing the feel of P4…but what about the rest of the dynamics and positions.

What about an overall intention that presents and captures those positions and feel…the entire enchilada…from takeaway to finish in one fell swoop.

Thanks RR, I’ll take one of those red pills (I hope you didn’t eat them all…)

Here’s another one: Perhaps a bit far fetched, but still.
While dancing, the hot teacher tears of her dress and slings or throws it across the room. (around the 2:48 mark in the clip)

Honey, I’m off to the local strip club to study the art of swinging a golf club…

Red pill it is then…let’s go down the rat hole!

The second tuxedo dance routine is revealing. Can you, if technically possible, post a small side-by-side image of David Lee Roth at 3:24 and Pavaveda’s avatar…and I’ll explain what’s at the bottom of the hole.

Can you do it yourself?

Sorry IOZ…I tried hard but the print screen button did nothing when I pushed it. I envy all you sophisticated computer people…I really do!

If you don’t mind let’s try it this way. David Lee starts with his back to us and spins around to face us. Just after he looks down to his crotch he takes a step forward with his R foot and THE MOMENT THE R FOOT PLANTS…HIS HANDS ARE SPLAYED AND OPPOSED IN FRONT OF HIM. I am only talking now about above waist movements.

Lets presume that is our intention when setting up to the ball…to get to David Lee’s position with the hands just like that. When we look at Hogan at the end of his swing his shoulders are level to the ground, just like David Lee’s. Now the only way to really get to that point is to pass through the position indicated in Pavaveda’s avatar.

Try this…it’s very similar to Mod 3 as you said…get into the position of Pavaveda’s avatar without a club, and your hands not significantly different but seperated a little. From there go to David Lee’s position and notice the pulling of the L hand, arm and shoulder and the pushing of the R hand, arm and shoulder…and if done correctly your shoulders should be level to the ground when finished…with the feel of a lot of opposing forces getting you there.

Better yet. From the top of the backswing…make the splaying of the hands the Intention. You might find that you’ll have to lower with the knees…enter vary low and shallow so that you can now from Pavaveda’s position accelerate steeply into that splayed relationship.

The red pill is wearing off…til next time.

The PrintScreen button is like a duck on the water. It doesn’t seem to do anything but below the surface an image of your desktop is saved to the clipboard when pressed. This allows you to paste it into Word or Paint etc.

I think I know what you’re getting at now! This feeling you describe is similar to what I’m feeling but a good thought to add nonetheless! I’ll give it a whirl after work today.
I like to use an opposite feeling to the one you’re describing to start the swing and ‘reverse gear’ into your feeling towards impact and beyond… This way I can feel the opposed forces during the whole of the swing. What are your backswing intentions RR?

Great job IOZ!!..that’s exactly the David Lee (DL) position I was referring to.

I like the saved R arm position. I’m interested to hear how you start your action. To start mine…I haven’t given it much thought. I just let the subconscious determine how I have to take it back, and bring it through, in order to eventually be in a position to be able to get to the DL position

I do know that one who moves “across the chest” and/or with an early roll of the wrists can never get to the DL position without having to kinda tilt everthing back to a level shoulders relationship…an early roll would put the L hand much lower to the ground than the R hand with the shoulders angled the same way. It would be like doing the DL position on the side of a hill with the R foot higher than the L foot.

With having the DL intention…it feels going back the club is doing a small reverse behind me…and then I feel like I drop with the knees and the R arm gets really tucked, with the shaft on 4:30 and way behind me so that I can get to Pavaveda’s position. During that process I feel the hands automatically firing, but the club still dragging, and the R arm stays in that position which gives angled hinging by way of the pivot.

RR,
I’ve been experimenting with the following lately: I have two extremes, the first is for the backswing and the second is like the DL position you described which occurs after impact. Consider the two pictures below:

If you keep the upper arms packed tight to the chest and you rotate your forearms like in the pictures. This means turning the right forearm towards the target and the left forearm away from the target (pronation). If you do this your right elbow will fold like a the arms of a T-Rex

It’s also easy to apply a bit of extensor action with this move.
The left arms wants to open the clubface while the right is closing it.
On the way down I reverse the direction and that brings me into the DL-position after impact:

There’s a bit more going on than just the rotating of the forearms but you get the point I guess.

Can you explain what you mean with this exactly?

It’s hard to believe Bomgolf isn’t behind this madness

It’s everywhere, I tells ya! Here’s one from my files- A little Moe Norman leg action… 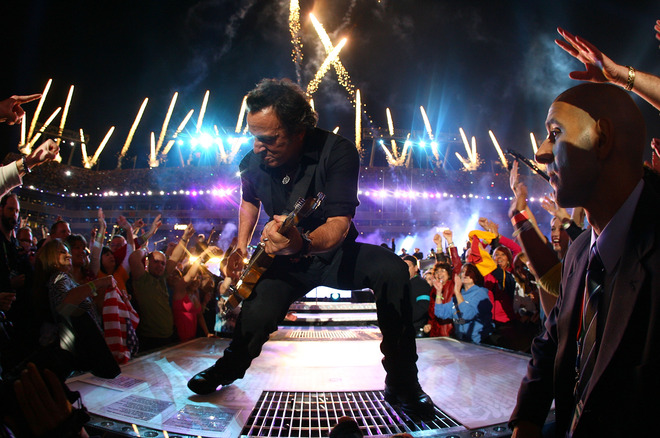 BOM, I just knew you would come up with something good, but Moe Springsteen!?

Now I know why they call him ‘The Boss’…

BTW, how’s this for a P4 position?

I didn’t even know they taught the vertical drop in guitar school, or the P5 position.

Hey, that picture of The Boss would make a great side by side with Moe caught at the right moment.

IOZ…my backswing intention is to let the subconscious do what it needs to do in order get to the DL position …which is a post-impact position feel. For me, that intention forces a flat, open drop of the club with the R arm saved for almost eternity. I looked closely at the Taichi position of the R wrist and, for me, if I made that my intention to have a bowed R wrist…I would tend to get off an inside path and the R elbow would kick-out and then I would have all kinds of troubles. That Taichi guy’s right elbow is kicked out in order to bow the wrist. I prefer the other way around: tucked elbow with bent right wrist.

The reverse you questioned is just something I feel at transition. I do it a little differently than probably others as I don’t use gear which is perhaps “optimally flat” ( only 2* down)

I like the R wrist to both bend and cock at the top. By doing so, it allows me a little more time to settle things in while dropping the club prior to firing to the DL feel…by which time I’ve eliminated the cocking aspect when the club drops flatter. I also get more distance by treating the R wrist in that manner…as once I’m fully settled then it’s off to the races!

Great stuff everyone. Really enjoy it.

RR , the taichi picture was not a good example, I would not want to feel my wrist bowing like that!..

Call the white coats, we’ve lost the plot… great stuff, indeed. IOZ, you’re an artist!
The resolution and size of this photo isn’t great but it’s the only one I have from a similar angle… see what you can do… sounds like you could snip one from a video somewhere though… 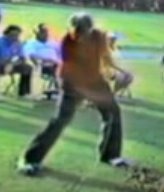 Keep those white coats away