5 Lessons is a strange book, on one hand he goes into tremendous detail about things, yet at the same time you feel like you’re being kept out of the loop. I’ve read it a fair few times so I’ve got a good handle on it, I have a good feel for where to read between the lines and observe his actual swing against what he’s saying etc.
But if there’s one piece of pure honest magic in there it’s the section regarding the waggle. In my opinion a great golf swing has to be felt through the hands, but it can only be felt through the hands when it works and is powered through the body and legs. Hogan was the man for this- he was a total hands/feel player because everything else worked so well. And maybe that’s the failing of 5 Lessons. With such scant information on the real workings of the body, legs, and feet, it’s legacy seems to have been boiled down to pronation and supination- the hands. Having said that though, and all of these things being understood, the section on the waggle is pure gold…

BG222,
I think you are absolutely correct. You ultimately have to feel golf through your hands. And the only way you can feel through your hands is if you have pressure on the shaft through impact. And you do that from the ground up with good footwork and leg action leading finally to a great pivot all to produce that pressure ie. feel in the hands.

I couldn’t agree more. I have read, reread, and studied Five Lessons. During my first reads I moved rather quickly through the section discussing the waggle and then I thought it would be just like Mr. Hogan to put some golden nuggets in the section of the book that many readers would probably glance over. From Mr. Hogan’s comments he wanted to give to those who were willing to go the extra mile and it made sense he would reward those who went through his book looking for the nuggets and not just a quick fix.

I have put this in various posts in more detail but in summation the nuggets I pulled from Mr. Hogan’s waggle are:

It’s neat to learn what others are picking up from Mr. Hogan’s waggle…littlealm

I was able to sneak out for a round yesterday at Mare with Al Barkow, neither of us having much of a day… although the sun was shining warm and a nice breeze off the SF Bay turned some of the poison golf shots into something much more palatable.

I hadn’t played in a couple weeks, and felt something was off. Al had just returned from visiting JoAnne Carner as he is doing a story on her in Golf World in an upcoming issue.

He mentioned that JoAnne’s teacher was Sam Snead for most of her hall of fame career, and Sam could fix her swing in 2 minutes. She told Al that when you are playing a round of golf, you have two holes to fix your swing. If you can’t do that in two holes, you ultimately will not likely play well.

Sam was notorious for aiming slightly right and pulling the ball a bit, almost like Hale Irwin does all the time. Al was saying that JoAnne would also have that problem… I continued my round of pretty mediocre ball striking, when I finally realized on the 14th hole that I too was aiming too far right, which seems to be my own cycle of ball striking since I was about 12.
Had I figured this out on the second hole, I might have had a really good round. Instead I played the last 5 two under for a respectable 72.

I simply aimed what felt like 15 degrees left of my intended initial flight line, moved the ball back about 4 inches in my stance, then just simply tried to hit a high shot with a shallow divot, and bingo… “ball at flag”. Knocked one 6 iron into a slight dead on breeze to a kick in 2 footer for birdie.

I had Al take a look at where I thought I was aiming, and he said I was right at it… but I felt really really open.

If you are swinging correctly had have access to true lowpoint, that can really be powerful stuff. If you don’t swing correctly, true lowpoint will never even be an option… and golf will always feel more like “The Rubix Cube”

There is a lot more intuition in setting up to the golf ball than people think. Good intuition, similar to playing wind shots or even lag putting is vital to top notch golfing.

Been stewing on this for a while now. It appears to me that Hogan’s waggle was perhaps more than just a path preview.

It may also have been a preview of how he would bring his hands back down. I call it his waggle hands.

At address, if we waggle with a little cupping action, that relationship of the hands with that waggle will be precisely the same relationship within a fraction of a second the moment we commence the flat dropping/free ride from the top. That’s the genesis of feeling bringing the cupped L wrist into impact. However that doesn’t address how the club is released.

The shaft is then turned, or tripped, over it’s axis into impact and the R hand and will not overpower the left.

So, he actually, in effect, waggled twice…once at address, and once at the beginning of the start down.

RR,
You’ve got a great mind. Hogan’s waggle had a lot to tell us, and his intentions were what made him great. His aims, in my opinion, had a lot to do with why he moved his body, and struck the ball, so well.
Cheers…

Perhaps bringing “waggle hands” from the top to the release area was his intention afterall.

Not enough time this morning, but I will post some more unusual takes on the waggle soon.

I think for the most part, your waggle will develop and change as your swing does. Hogan’s waggle clearing is an out to in looping motion nodding to the 4:30 line. Feeling the freedom in the wrists that will allow for a proper loading action at transition is another function of a proper waggle. The waggle can be used to help gauge the intensity of the strike, and a visualization of both shot shape, trajectory, and anything flight path related.

I don’t believe copying Hogan’s waggle is going to teach you his swing however. But learning the proper biomechanical actions of the body could very well lead you to a waggle that would be very similar in intent to Hogan’s at some point.

I agree…the waggle, in and of itself, is not going to tell anyone diddly-squat. However, assuming one knows the correct body dynamcis, and can reasonably produce those actions with some sense of continuity and repetition, the waggle can serve as a reinforcer as to how one proceeds along those lines.

Anyone have pictures to post of Hogan’s waggle completion postion at address before he loops the hands back to the ball…and to compare that with a clear picture of his hands and wrists just immediately prior to the hands firing. Might be interesting to see the wrists orientation between the two: the waggle and just prior to firing.

I reckon John Daly has one of the best waggles in the game…
In this clip don’t just look at the set up waggle, but look also at all his little moves from the start of the video. It’s all there in my opinion. 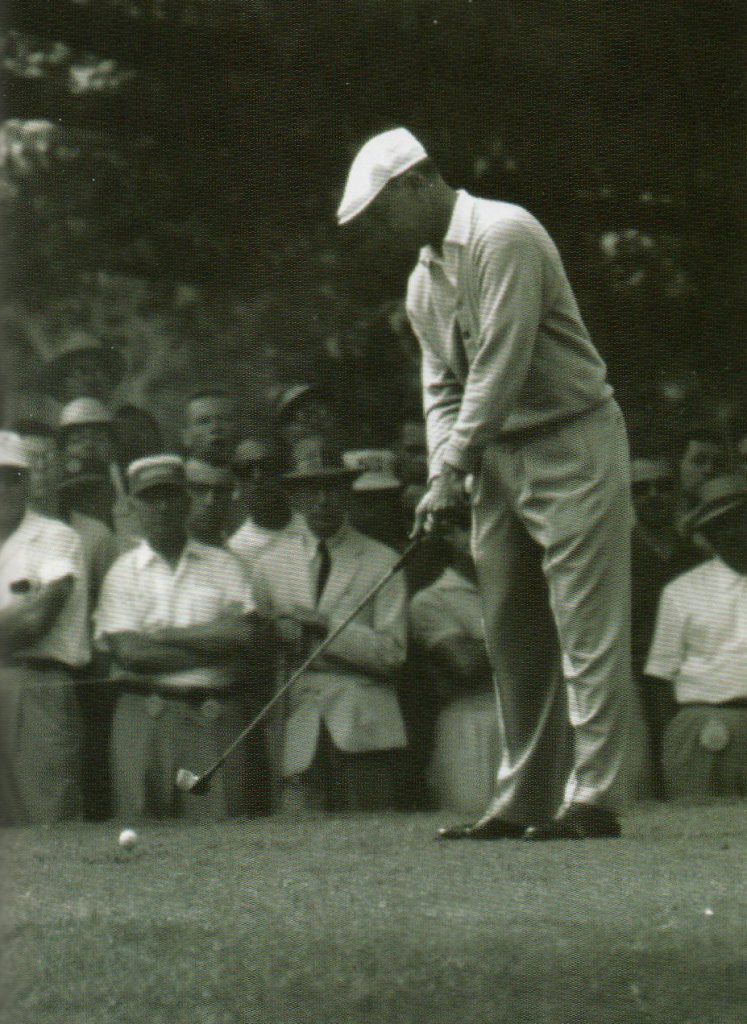 That’s an unbelievable photo. Any thoughts on how he gets the face so open?

Wrist and forearm rotation…it is pure gold…module 1 students and all students really, should take a good long hard look at this photo

I’m not seeing any right wrist or lower right forearm rotation in that picture, are you?

It looks to me that his left hand and club face are in a pretty good alignment…both very open…looks like his left forearm is rotated (even though it is hidden under his sleeve)
Looks like his right hand is rotated also…but we should remember Hogan had a particularly ‘weak looking’ right hand on the grip to begin with so I would say this weak start position makes it look like it is not rotated as much as his left…I would also suggest his right forearm doesn’t look as rotated as his left for the same reason.

I don’t get the feeling Hogan did anything by chance or coincidence. Everything was very calculated and mapped out. He was probably the deepest thinker the game has ever hosted.

The intentions here are spot on with what you would want to be feeling coming into impact… if you were planning on an active strike of the hands and forearms, and a flat rotation through the impact arena with the torso. All of which Hogan did with amazing precision.

A lot of people just waggle the club back to get a feel for the swing but dont really understand the purpose. I think from the DTL view you can get a real sense of the feel of the overall swing just from the waggle… the down, then the low entry into impact.

That’s a good point. I do reckon that wrist was pretty strong/neutral going back and the rotation took place in his upper right arm. He said he waggled with his left hand, I wonder was that always the case or did it vary shot to shot.

I don’t get the feeling Hogan did anything by chance or coincidence. Everything was very calculated and mapped out.

So true, and it’s what makes him so attractive to analyze, knowing that there probably weren’t any accidents.