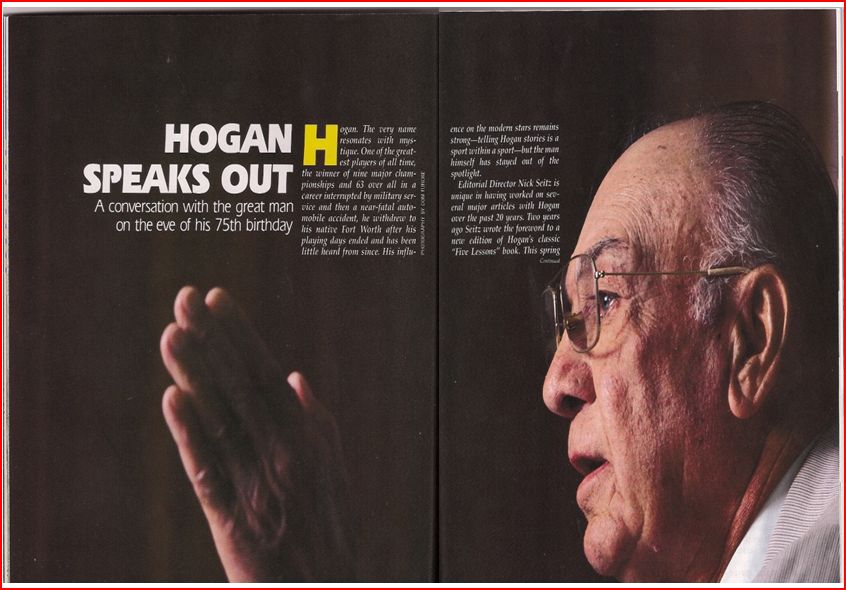 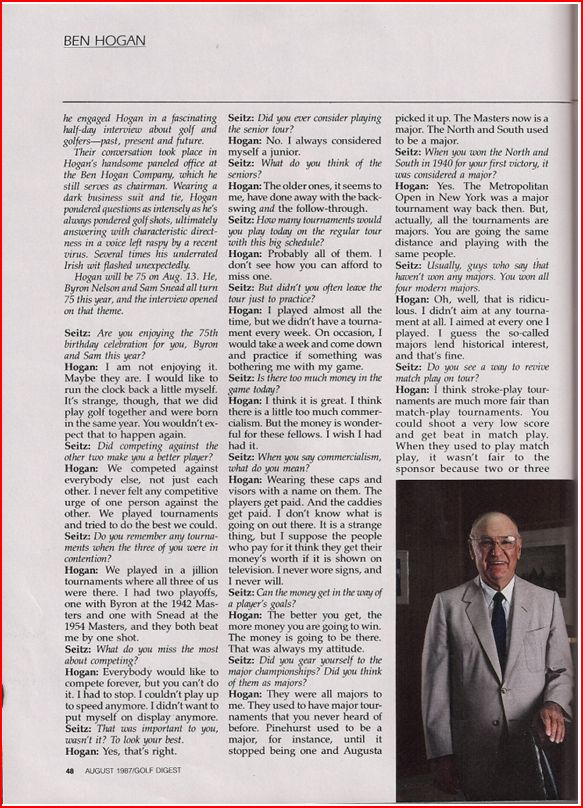 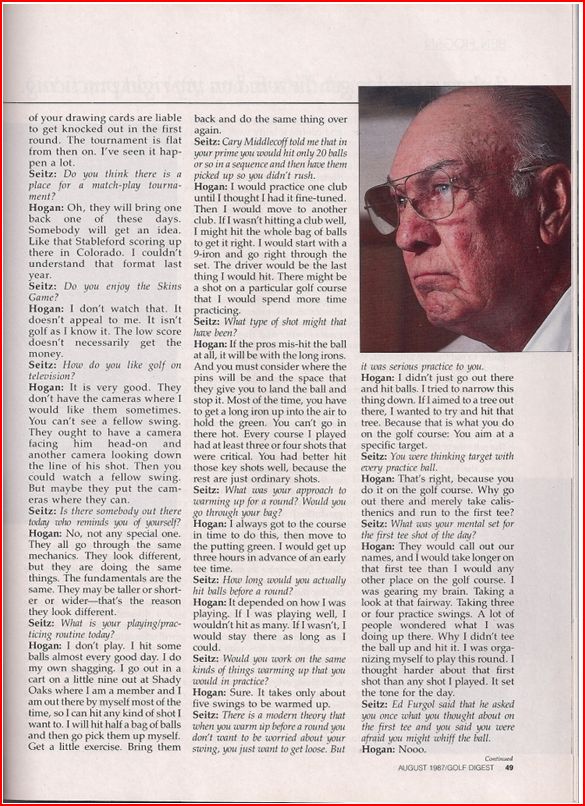 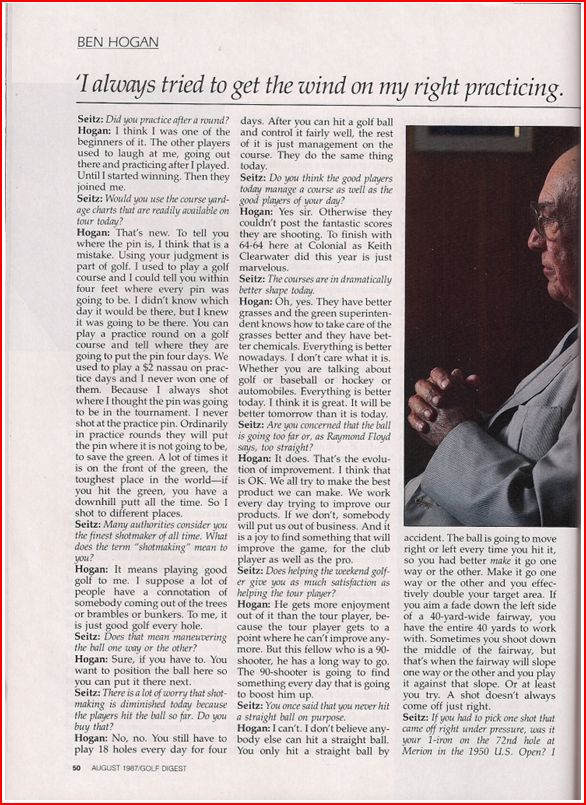 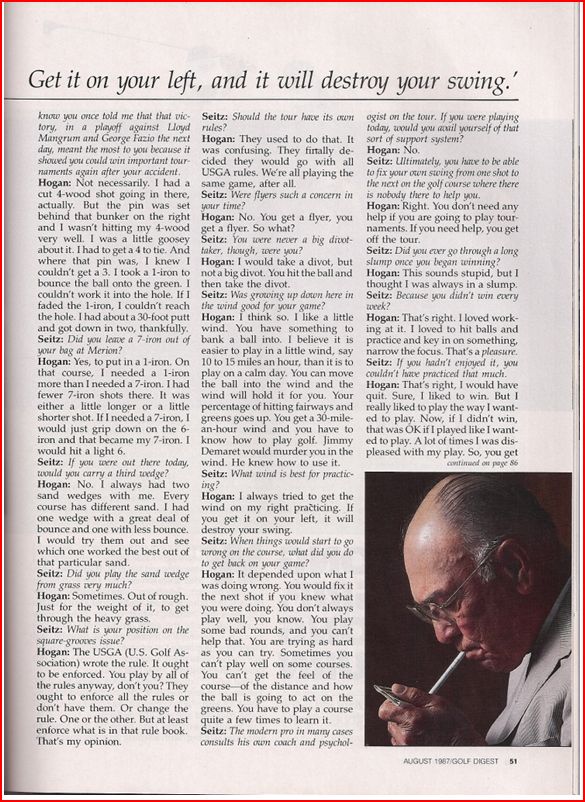 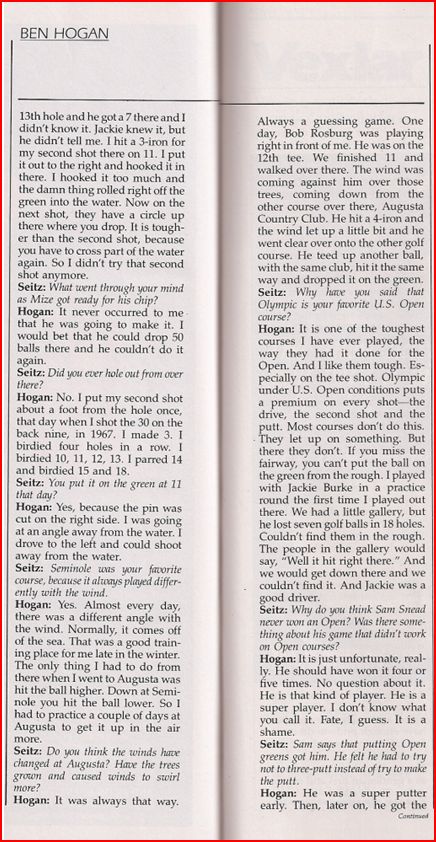 If anyone can do it better as a PDF file or something more legible or easier to access–please copy, save and go right ahead.

Interesting that in 1987 he felt there was…too much commercialism.

Silliness of the majors… any event you play is a major…

Yardages should be done away with…

Sand wedges being heavy and for good long grass… unlike today’s sand wedges that are made for fairway play… not sand.

Playing better with a little bit of wind… 10 to 15 mph… and how you can use the wind to hold or help shape your shots.

Why build a torture chamber?

Housing shouldn’t be close to the golf course!

Hugo, can you send me that via email?

Its very difficult to read.

I like a little wind. You have something to bank a ball into. I beleive it is easier to play in a little wind, say 10 - 15 miles an hour, than it is to play on a calm day. You can move the ball into the wind and the wind will hold it for you

I’ve always liked playing in a little wind because it gives you something to bank the ball into. I think that a confident shotmaker, given the choice, will always try to work the ball into the wind rather than simply hanging the ball out into the wind and letting it drift back to the target. It’s simply a stronger and more reliable shot

Snead from The Lessons I’ve Learned

I think that a confident shotmaker, given the choice, will always try to work the ball into the wind rather than simply hanging the ball out into the wind and letting it drift back to the target. It’s simply a stronger and more reliable shot

No doubt Snead is right here, but does anyone know why this is the case? I think i understand the effect of a headwind on a golf ball; that it accentuates ballon spin and hook or slice. And that the opposite is true downwind.

However a sidewind is more complicated and does not seem to be covered in any physics notes i have. My best guess after a day of skiveing, is that you are better off with the spin axis of the ball being inclined down towards the direction of the sidewind so the ball can bore into the wind, rather than being inclined down away from the wind where the forces will just cause the ball to baloon and drift away.??

I have always hit into a sidewind and allowed it to drift back, and its always windy in the grim North, understanding the wind would be a big help.

I would describe it this way…

If there is a strong left to right wind… and I am going to draw the ball into the wind, then the more I draw the ball, the more that ball is heading into the wind… in other words, the more resistance the wind will impose upon the golf ball the more “hook” is on the ball…

If I over draw it… the wind will fight it a bit harder because the ball is turning more into the teeth of it.

Same thing for a fade, just opposite.

I always liked hitting it into a sidewind anytime I wanted the wind to kill it and I wanted it to land soft, whether it was landing in the fairway or on the green. It just so happens that I want the ball to land soft almost every shot. About the only time I would want to ride the wind would be when I’m teeing off on a really long 4 or 5 par with a huge fairway that turns the same direction as the wind and only if the pin is tucked where I have to be as close as possible to the green. That’s not very often. If I hit it into the breeze I’m controlling the shot, if I hit it with the breeze it’s controlling me. Big n’ slingin’ n’ goin’ somewheres’ I’se ain’t never seen before that ain’t no goods to nobodys’.

this is an interview with Dan Jenkins- a golf writer from Fort Worth who grew up with Hogan and writing about him. He has some good insights in this interview. Interesting to hear from someone who knew Hogan instead of hearing second hand stories. I love his quote from the interview “Accuracy was more important than anything”