I noticed Hinako’s swing during Sunday’s final round at the Women’s Open Championship. She exaggerates Hogan’s elbows at address; short,flat backswing and right arms stays bent a long time. Thoughts? 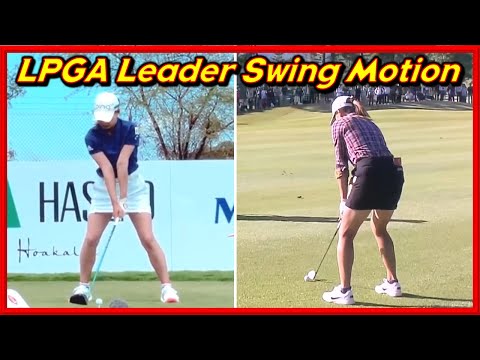 I thought the same thing when I first saw her win the 2019 Women’s British Open.

She has a flat backswing and flat downswing. She gets a full shoulder turn with minimum hand travel and looks very much like she’s holding shaft flex into impact. But post impact her right arm throws out, the toe flips over, and looks like a swinger’s release.

Would be interesting to hear Lag’s thoughts on this swing.

You are correct… a problematic release in my opinion… but I like the rest of it.
She’d be a good ABS candidate for top level striking if she ever found us.
I could see her being the next great LPGA striking legend.

I’d say the lady Jon Rahm…still a damn awesome move. Bet she has complete control over it most days…

She is also a fine softball player.

I’ve seen clips of her pitching softball in a competitive game in her native Japan and she was terrific.

I’m always trying to get ppl to soften that trail elbow. She has it hyperextended. Cool look at the top. Good for lpga where distance is not as key but I would say too flat for a male golfer unless you are built like rahm. I don’t think you Would see someone built like Justin Thomas Swing The flat and elbow tucked and make it on tour any more.

I like a high elbow like Jack and Mike Austin…strickly for distance. That way you can really pound on that lever for speed, no stability tho unless youre a beast.

Imho, JT has no choice give the clubs he plays and his height. He has to jump to get underneath it (like the softball pitching) and maintain shaft plane as a swinger.

If he went flatter, he would be like si woo kim who stuggles with his timing alot since hes coming from the inside quadrant.

I think he just grew up with modern tech and was a little guy, so he got distance going more upright. His move is so consistent tho…and his dads a pga guy. Id say its modern text book for guys like him. Zalatoris has a few of the same moves…

I like watching JT play. Not from a swing perspective, but just his shot making and feel for the game.
He’ll hit just about any shot - high, low, left, right.

Would you say that Si Woo has a swinger’s release or a hitter’s release?

I would say hitter because he cuts it left beautifully post impact. But I guess if he’s not bringing a flexed shaft into and beyond impact he would be a swinger by ABS definition.

his shot making and feel for the game.
He’ll hit just about any shot - high, low, left, right.

For the same reasons I enjoy watching Bubba Watson play. I love his unorthodox style.

I would imagine a lot of these modern pros would adapt pretty quickly to “hitting” if the tour ever decided to tighten up fairways and grow the rough a bit more.

I find a lot of the driver/wedge/putter stuff pretty boring.