I believe if you are a really good ABS definition “Hitter” - so weaker you can Grip the Club.

I play with my left thumb at 11:30… It feels weak at address but strong at impact.
The downside with this thumb position is that I can´t cup my left wrist in the backswing anymore…

I am a believer in maximizing arm rotation…

That is thought provoking.

Questions for anyone:
In regards to Hogan’s ability to “not re-cock” post impact, what role does the supination of the left wrsit play? does the application of pressure at a particular part of the grip by a particular part of the hands play a role? Do you think his eventual dorsiflexion/bending of the left wrist is active or a passive thing from the tremendous force post impact?
Thanks.

I wouldn’t give odds on it being actively any of those you mention Eagle-One.

I would say, and like to think, that there isn’t any room to re-cock the thing because the pivot-turn was so strong, and the pivot intention to accelerate and to remove the left vector is responsible.

He starts at address with a mid-hands orientation and the club is in front of him basically. However in the zone it is abundantly clear the club is behind him. So it went from almost being in the left sagittal area at address to the right sagittal area exclusively through the zone. That ability to keep it behind takes the left vector out of play right now, not later as long as the motor stays true.

Think about it, a goat hump brings the left vector into play because the club wizzes by you because the hump is actually a stall, versus keeping it behind you it follows you wherever you go.

My take is that it was mainly the pivot. I really think Hogan’s sequence is different, and more complex than everyone else. The right hip working back and forward in transition gave him a lot more room and usable rotation. The fallacy is that all of the weight is on the left foot. I think he is virtually weightless in the left foot at that time. There is still pressure on the right foot, but it has lessened because he is literally falling forward. Then he “lands” hard on his left foot, and there is an immediate rebound into his right foot. So he has great pressure in both feet. This happens after his left hip has moved inside his left leg so he establish his post impact path, and the rebound to the right leg creates another rebound targetward. That rebound brings with it the entire right side. Those that see early left and go…have no idea.

Snead’s pivot is much more simple, just squat into the right leg and go. Hogan’s is much more athletic and dynamic. That is why they don’t talk about what Snead’s shots looked like compared to Hogan. As a kid I was able to watch Snead in the early 70s at The Nelson. The shots were beautiful to watch, but the flight was kind of floating instead of peircing. The flight really matched the swing, which was so smooth and rhythmical.

From P4 to PV5, Hogan’s left shoulder moved farther and faster than any I have ever seen from any era… keeping in mind also that cohesive body tension remained intact. The fossil of this shows in his right foot position from a DTL view at finish. Unlike the modern players who lose ground pressure early, Hogan’s right foot never flipped over past 12:00. His right heel always had an intention of staying down and low. His legs were firm, and his feet were not flopping around haphazardly like today’s players do. Velocity of the club or body parts is not the same as acceleration and thrust.

For this reason I am a big believer in finishing the club very firm and structured in the body for consistency giving the feeling of a tangible experience that can be felt and realized from day to day, year to year… once this habit becomes second nature.

Grady, great video. I especially like the way you explain Hogan’s weight shift, it’s something I’ve been trying to work out lately. Knudson seems to do this move, too. Somewhere I came across video of Knudson with his back to the camera and you can see it very well. They make it look so fluid and graceful and natural but I find it difficult to incoporate. I’ve been fighting a sway impulse for 20+ years. You said:

“…weight was here early (rt hip) and then its falling left with the right hip moving towards the target… As the club is moving back he’s moving forward…free falling and then grabbing” [with the right foot?] “I feel the force going that way (away from target)… You’re falling, you’re grabbing, and it throws the weight right here (inside right foot) and that set him up balanced in his feet with lots of pressure and then he can push off and drive the right side through.”

Knudson says over and over, “Do nothing at the expense of balance.” I think you’ve explained very well how he and Hogan accomplished this in the backswing and you’ve given me some concrete ideas to work on. Thanks

I’ve had this concept in mind that the body’s center of mass (chi maybe?) starts out centered over the feet, but then in the takeaway it doesn’t just fall to the right foot, and then forward on the downswing in a linear fashion as I’ve always done it (sway back- sway forward). Instead, it rotates clockwise inside the right foot and around your buttocks and then, just before it lands inside the left foot, the right foot drives down and gives the whole thing a shove forward.

In my view he is free falling on his left side, and his left leg receives lots of pressure and grabs. That causes an opposite reaction or rebound to the right foot. So there is always pressure on the right foot, but there are big increases in pressure first on the left foot and then back to the right. The free falling allows for a pretty big forward move of the COG. This ping pong of pressure in tge feet really dovetails nicely with our mod 2. But you are right it is a complex, athletic movement.

Grady mentioned that the left hip moves inside the left leg. I am not sure if John advocates
this, but personally I need in transition to go with my left hip socket over my left ankle
or my lower body blocks - with my Irons I need to go even farther left… 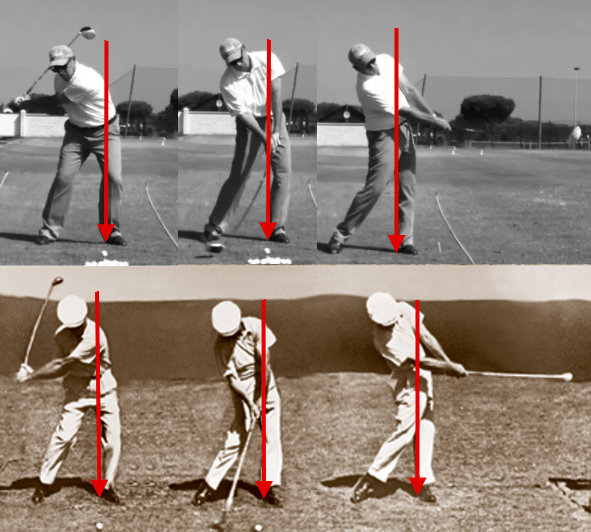 I can´t move inside my left foot - I need to go way outside with my left knee and hip to move
naturally and fast. For sure other players feel naturally to move inside there left leg like Grady.

I think the hip inside the leg from caddy view is ideal, but not essential. What is essential is for the left hip to move left of the left thigh and knee. I see guys that try to move the hips laterally like Hogan with focus on the left hip. I think the lateral move is a byproduct of the right hip moving targetward, and the right hip is moving because of pressure from the right foot. The right foot pressure is a reaction to the combination of the trigger compression and the club swinging up and back.

I think the hip inside the leg from caddy view is ideal, but not essential. What is essential is for the left hip to move left of the left thigh and knee. I see guys that try to move the hips laterally like Hogan with focus on the left hip. I think the lateral move is a byproduct of the right hip moving targetward, and the right hip is moving because of pressure from the right foot. The right foot pressure is a reaction to the combination of the trigger compression and the club swinging up and back.

I have the same opinion.

Hey guys, what’s the significance of Hogan turning his shoulder inward with the big cup in his left wrist on the setup and in the swing? It seems like even when he is returning into impact the last foot or so he rotates the forearms but the left elbow is still pointing down the target line and his left arm is straight.

I cover that in the video I did. I had always noticed that, even though Hogan talks of keeping the elbows close together and there are those drawings in 5L with his arms bound together with rubberbands, the insides of his elbiws essentially oppose each other. That makes sense with his right elbow since his right hand was so “weak” or on top of the grip, but not with his left elbow and weak left hand grip. Drew suggested that he ibternally rotated his left shoulder and kept it that way through the strike, and that this reduced tge ROM and thus clubface closure. I don’t know about that. I have learned you can rotate tgeleft forearm without moving the left elbow. But I can still hook it doing this. Of course, it is possible I am failing to hold the left elbow in place through the strike. What I do know is that having a weak grip like Hogan gives you more useable forearm rotation on the prehit side of the swing, and setting the elbow like this puts a cup in tge left wrist despite the weak grip which makes it easier to rotate the club CW.