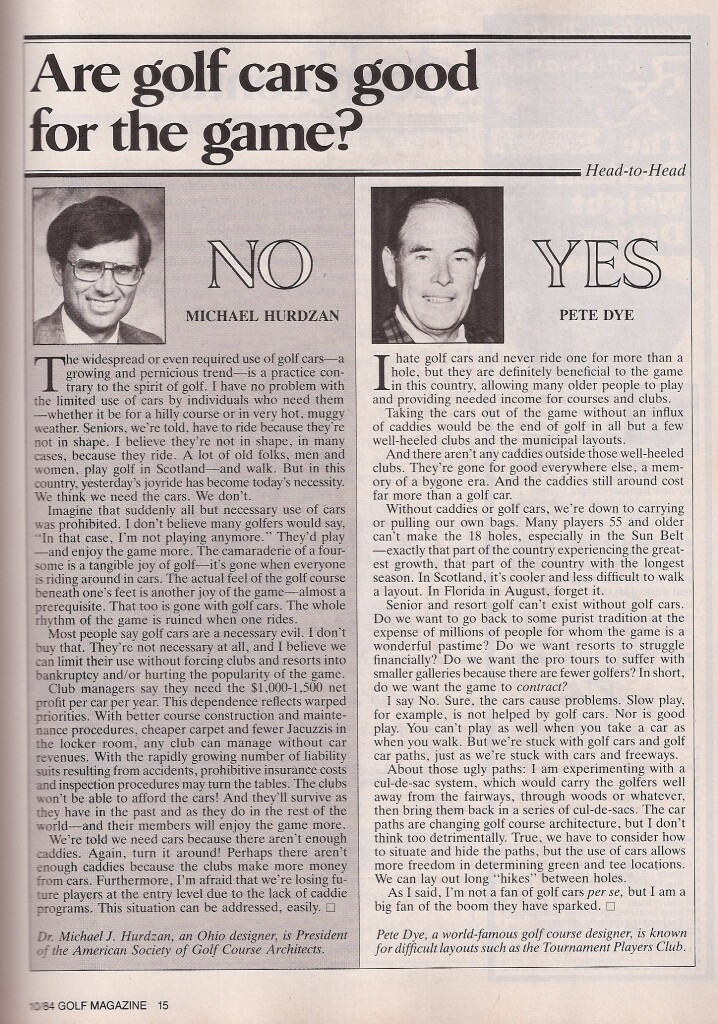 Dye says carts are great because they bring lots of older people to the game, but maybe that’s damaging the game in that golf is known as an old person’s game. I’d estimate 90% of the field at my club on a midweek comp are late 60’s and over, three-quarters on a Saturday.

I’ve known a few women around the 40’s and young compared to the norm, who have quit because they have little choice but to play with women older than their mothers. Without fail these women tend to be very clicky and rules police, their rules of course. One friend finally won after a year and they DQ’d her for wearing 3/4 length pants. She quit. I reckon the old women definitely keep the younger ones away–it ages them by association.

In Vegas golf carts are mandatory at every single course except the two munis & LV National (TRGA Site). At Southern Highlands & Royal Links you can pay the caddie fee (usually $95 plus tip on top of $125 LOCAL rate) to walk & have the caddie drive the cart (yeah that’s right). Here’s a short list of the courses I paid the cart fee & tried to walk while I lived there & was either forced to ride on or booted off of:

That’s a very sad indication of where this world is heading.

I hardly ever ride and usually only because it’s required. Tried the 3-wheeler for a while but figured I exerted the same amount of energy carrying a good lightweight bag as I did pushing a 3-wheeler.

Golfers who are slow are slow regardless of whether they ride or walk.

Whatever happened with Dye’s “cul-de-sac” experiment? Nothing I guess as I’ve not seen any improvement regarding concrete paths meandering through a course. I’ve played a long time and can count on one hand the times that my ball hitting a cart path was advantageous to the result of a shot. Just more collateral damage from the whole riding cart requirement imo.

It frustrates me to see people not walking their talk.
Dye admits to hating golf carts but then supports them because of the business aspect only.

I would rather play golf on a golf course mowed by goats and just putt on greens mowed three times a week. If the terrain is interesting, and an architect did a creative job of finding the holes on the piece of property, golf can be just as enjoyable and cost a lot less. Carts are not necessary for most. Not having the option is criminal.

A pro shop, a grille and bar, a locker room and a bag room with a couple of offices is about all you need, maybe a little starter booth.

I take a cart perhaps 2 times a year if temperatures are up to 35 degrees - more than anything to protect my delicate skin from the hot sun.

I used to use a trolley but last year I tried carrying and that’s the way I prefer to do it now. I like the idea of preparing my bag each time I go out so that it’s carrying the minimum required to get me round - with a trolley I used to pack all sorts of things in there that would remain from round to round. I find carrying better on my back oddly enough. When you play a good tee shot there’s nothing better than walking to your ball 200-odd yards taking in the scenery and feeling good about your shot, with your hands resting over the back of the bag to reduce the clinking of the irons. When I’m in the cart I don’t get the chance to reflect and enjoy the experience. I also love just walking straight up to the green and plonking my bag on the fringe while all the trolley pushers/pullers are navigating around it. My next challenge is to make my carry bag water proof because all the bag-covers seem to cater for trolley bags and don’t fit the carry-versions - this is important because I want to be able to go out and play in the rain as that also can be an enjoyable experience as long as me and my bag are protected to some degree from the elements.

Walk for sure. Carts should be used only by a player nursing an injury, or by someone with a disability. Golf was made for walking.

I hate to ride but almost all the courses I play require them unless i tee off at some ridiculous hour before the sun comes up. I always feel rushed when i’m riding and can’t develop any kind of rhythm or tempo. Walking also lets me clear my head after a bad shot and think about what i’m going to attempt to pull off on my next.

I have only ridden in a cart twice, once for novelty and the second time when nursing a hangover of gargantuan proportions just before taking on what is renowned to be one of the toughest courses in Europe - Les Bordes

That’s what I loved about growing up in the Melbourne sand belt area…every course and every hole was designed with the next hole in mind…I am sure most of the older courses were the same…putt out, and walk no more than 30 yards and you are ready to tee off on the next hole.
Condos and houses on the course got rid of that concept by sticking the tee 500 yards away past a few blocks of land and homes…and then the technology boom again increased distances between greens and tees because those courses fortunate enough to have enough land left to build ‘Tiger tees’ did so
I remember playing a tournament in Japan one year where we had 3 rubber mats you had to hold onto that pulled you half way up a mountain and one was so steep we had to all pile into a chair lift and get lifted skywards!!! I felt like I should have brought my skis and not my clubs…even at PGA events in America there were a few courses were they had to shuttle players between tees because it was too far to walk

Those who have no choice but to take a cart, you might be able to get away with riding as a passenger with a carry bag between your lags. It’s something I do on the rare occasions my three playing partners are riding, just hop in when I would otherwise be left behind.

Usually that’s just the trip to the tee shots on par 4 and 5’s, after that I walk the hole and nearly without fail beat both carts to the green. The trip between tees on these horrible condo courses Bradley mentioned, too.

Plus I always have my entire kit on me–nothing worse than playing a shot with the wrong club because a lie was not what you expected.

I have zero patience to sit in a cart while waiting for someone else going through their routine, when I could be walking.

When you walk (carry your bag), do you bring 14 clubs? Just wondering, as ABS student we all tend to go with heavy metals.

Yeah, but at ABS we only need to carry one ball so that makes up for it.

When you walk (carry your bag), do you bring 14 clubs? Just wondering, as ABS student we all tend to go with heavy metals.

When my R20 sand wedge arrives from Lag, that will make 13 automatic choices for the bag. I may need to go back to a trolley for carrying that club.

Yeah, but at ABS we only need to carry one ball so that makes up for it.

My next challenge is to make my carry bag water proof because all the bag-covers seem to cater for trolley bags and don’t fit the carry-versions - this is important because I want to be able to go out and play in the rain as that also can be an enjoyable experience as long as me and my bag are protected to some degree from the elements.

Today was my first time walking without a trolley and I really enjoyed every second of it. My brand new bag (Llama) itself is quite water proof but it doesn’t have special pocket for umbrella. I only carried 12 clubs and glad could make it to 18th. Honestly speaking, it’s not as tired as I thought it would be. I could go on for another 9 holes. One thing I notice with walking is that I could clean my club while walking for the next shot. Now, I can’t wait for the next round.

Once you carry you’ll never go back to a trolley again.

I hate the trolley (motorized carts are even worse) and find it much easier to just put them up on my shoulder. The double straps have done wonders for the ease of carrying my clubs. I used to use a tube bag and carry 2 or 3 clubs upside down. The tube bag was extremely light and the clubs upside down balance the bag.

About 15 years ago, I played a course in northern Michigan and asked them if I could carry my clubs. They said sure so on I went. Got to about the 6th hole and had about a 3/4 mile hike to the next tee. I was alone on the course so the time did not matter and I just enjoyed the view walking between the holes. Later on a grounds crew member came up to me and asked if I had carried my clubs the whole course. I said yes and he told me that I was the first person he ever saw carrying his clubs on the course. The course was about 5 years old at the time. I had a great time and would do it again.

Once you carry you’ll never go back to a trolley again.