Lags mention of this mythical insert prompted a google search in the waning hrs of my work day ,

… and yielded the following cool article,
looks like finding one or a club with one would be a ’ holy grail’ find in the persimmon world!

Hand-selected “U” grain USA Persimmon paired with one of the hardest insert materials in the industry make the perfect combination for the serious golfer. The Glass Trac insert is made of nearly 100 layers of micro glass fibers that are resin-bonded together, resulting in greater distance and accuracy in every shot. A great choice for today’s high-compression golf balls.

Hand-stamped Signature on the Head 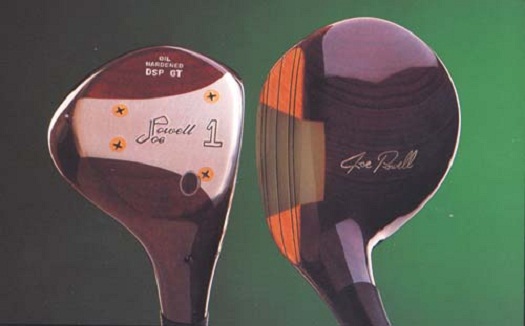 The ‘Gamma Fire’ Glass Insert
Ordinary glass, turned diamond-hard by gamma treatment, might just be the “super bombarder” in your next set of woods
by Patrick McGuirk

“It might just be the hottest thing to hit the golf world in years.” A rash, unfounded statement? Not according to veteran San Jose clubmaker Francis “Bud” Penecale, who’s the first expert to examine, test, and approve an atomic age development – the gamma-ray radiated diamond unbreakable glass golf club insert. “Everybody who’s tried it is crazy about it,” enthused Penecale. “It’s been going like wildfire.”

The concept of a super-hard unbreakable glass insert that would shoot the ball off a driver with unparalleled velocity is the result of the fertile imagination of L.C. “Bud” Winter, internationally-known track coach, and is beginning to create a lot of waves in the golfing establishment with two of the largest manufacturers clamoring for exclusive rights.

Just how a famous track coach – Winter developed many world champion sprinters at San Jose State – who admits to maybe three rounds on a golf course, could come up with a revolutionary new insert seems a bit unbelievable. “No, I’m not a golfer,” confessed Winter, who has been retired from track competition since 1970, “but one day I got to thinking about something I had seen on a baseball field. It was a Japanese baseball bat that had been treated with radiation and, of course, it was illegal. But it did a job.”

From baseball bats to golf clubs? Well, not quite. first, Winter wondered what would happend to a pole vault pole that was hit by radiation. Would it make it stronger? More durable? More flexible? “as it turned out,” said Winter, “theoretically, it was a good idea, but it didn’t work. The fiberglass poles didn’t react to the radiation and the steel ones didn’t either.”

So, another brilliant idea went sliding down the drain but it wouldn’t stay there and one day it came bubbling up to the surface again. “I kept thinking about that baseball bat, and the thought occurred to me that it might work on other substances. Like glass. Unbreakable glass. And, how would it work in a golf club?”

Winter then embarked on a series of experiments with a number of substances and radiation laboratories. Just what the substances were and which radiation labs were involved is something Winter doesn’t care to disclose. What he does admit is that the supply is pretty good, the glass itself is a trade secret, there’s no radioactivity emitted from the gamma ray inserts, an that the process is patented.

“I honestly don’t know what they do to the glass in the radiation laboratory,” said Winter. “And I don’t know how long they hit it with radiation – in fact, I’m lucky to get into the lab when they are doing it, let alone watch them do it.”

The diamond glass insert program didn’t march forward very rapidly for a while. Winter, inexperienced int he golfing world, wasn’t able to find a clubmaker who could satisfactorily insert one in a face until the day he dropped in on Penecale and asked him if he could be of any help.

“I was pretty busy,” Penecale recalled, “but I told Winter I’d do it for him”. That was about six months ago and since then, Penecale has been completely sold on the idea. “You know,” he commented, “there are only a few important component in a golf club, and the insert is one of them. The diamond glass insert looks good and then there’s the tremendous feel of the ball coming off the face. Actually, the biggest factor is its color. The green is very pretty although it does become dulled after being hit with radiation but it’s significantly harder after being treated.

One of the unanticipated negative reactions to the gamma glass insert, which puts the weight in the center of the clubhead, is that it conflicts with the current heel and toe weighting concept that’s the very last word in a number of new golf club designs. “Without mentioning names,” said Penecale, “we let a couple of golf manufacturing firms give it a tryout and they said it was against their designing principles.”

Just what is a glass insert and what does it consist of? According to Penecale, it’s made of a laminated glass with an epoxy base. “There’s no bad factors to it,” Penecale stated. “It doesn’t have any fatigue or moisture problems. It isn’t too hard to machine although I found I had to use special belts to file them down to size – the normal belts weren’t sharp enough to do the trick.”

Whether or not radiation will change a piece of unbreakable glass into a stronger, more sophisticated material is something the scientific world isn’t quite ready to comment on without extensive testing. One of the professors at Cal Tech in Pasadena who specializes in solid state material sciences was a bit skeptical. “it’s true gamma electromagnetic rays with higher energy can dump a lot of energy into a material and that changes its properties. You do get some electrons excited from the ions, there’s the interaction with neighboring ions and the ions are in different order. The color of the material will be changed but whether or not this will affect the mechanical properties is doubtful.” The professor concluded in his offhand opinion that if anything, he felt it might make the material more brittle.

If there is a brittleness inherent in the gamma radiated insert, it certainly wasn’t apparent at the B&M Golf Company in Montebelo where it was tested and compared to an ordinary plastic insert on B&M’s Swing Speed Timer (dynamometer). Jim McFarland, Par Golf’s technical expert, a low handicapper, made the test, using two woods with almost identical shaft and swingweight characteristics, the only variables being the inserts. The Swing Speed Timer showed that McFarland, using the diamond glass insert, increased his distance an average of about six yards with his good hits. The reading for the plastic insert at the 105-mph clubhead speed showed a ball speed of 145 mph and a total carry of 225 yards. The radiation-treated glass insert figures at 105 mph clubhead speed recorded a ball speed of 148 mph with a average carry of 230 plus yards.

Admittedly six yards doesn’t seem like it would create much of an edge on a 400-yard par-4 hole. But if it means the difference between carrying a fairway bunker 225 yards out or ending up in it, possibly under the lip, that six yards could easily mean the difference of two strokes on that one hole. And on today’s pro tour, that could be translated into thousands of dollars. In the meantime, Bud Winter has one of the hottest properties in the golf world on his own hot little hands, and is in the process of making up his mind what to do next.

“We’re not even sure of the name yet and what it eventually ends up to be will depend on what our research reveals.” Whether or not Winter’s process will be assigned to any one golf company or not is another decision that hasn’t been finalized. As the word is beginning to get around, the demand for the radiation-treated insert club is skyrocketing. Penecale reports that during the Atlanta Classic, he had a frantic call from a manufacturer who wanted to put in an order right then for 10,000 of them.

San Jose’s Forrest Fezler, who’s been doing very well on the PGA tour this year, has had Penecale send him a graphite shaft driver with the glass insert and will probably be the first to use it on the tour. If Fezler begins to knock them out of sight from the tee, the USGA will have another equipment decision to make one of these days. At the moment, the National Association of Golf Club Manufacturers is alarmed about the possibility of the USGA making decisions that would affect every company and want very much to be involved in any equipment test they (USGA) may conduct. Winter’s radiation treated glass insert may pose an additional problem.

The den walls of Bud Winter’s San Jose home are literally covered with plaques, all attesting to this ability to develop champions. As yet, there aren’t any from the golfing world, but the prospects seem likely. If he isn’t hailed for the gamma insert, he’s got a lot of other ideas. One of them, his isotonic muscle trainer – a great aid in developing the left side muscle control – has been patented, will soon be on the marked, and should receive wide acceptance.

And what does the future hold in store for him? “I don’t know,” smiled Winter. “I may even take up golf.”

I think I have figured out what a gamma fire insert is …
Based upon different forum’s and great input from other’s who know a lot more that me.
One guy even confirmed with Mike Just how cool is that?

Gamma Fire is simply a marketing term for g10. There seems to be NO gamma or radiation; the big secret was that it was readily available from the plastics manufactures LOL
G10 is a phenolic ( based upon chemical composition of the resin)
It is a fiberglass product that has a very high rockwell hardness, hence the smash/ball compressing hitting factor

It comes in many colors even camo- knife makers use it often.
But. That green is the coolest or inserts

I have a Penna JS which I have flattened, shafted and weighted but the face had been re-sawn poorly before I got it
It’s time to change the face of this Battle Ax to a gamma fire.

Dang Newton!
Now thats what I call research!..kinda killed my fantasy about finding some ‘super- power’ insert
that would allow me to hit persimmon EVEN FARTHER past my ‘Modern Club’ buddies off the tee…

One thing for sure about the Gamma Fire is that to reap the benefits, you need to catch most of the ball on the insert.

I think it goes a bit farther than the fiber inserts or the ceramic inserts. A little hotter than the aluminum inserts from the old Macs also.

I know your right on catching it on the insert to see results!!
I think the longest club off the tee of the dozen + persimmon drivers I have picked up is an old Magregor
rt2w with the aluminum insert… it was my 3rd flattening project, got it at 51 deg. which I like !
Smallish head , more like a 3 wood , but man, when I hit this one on the ‘bullseye’ the ball screams 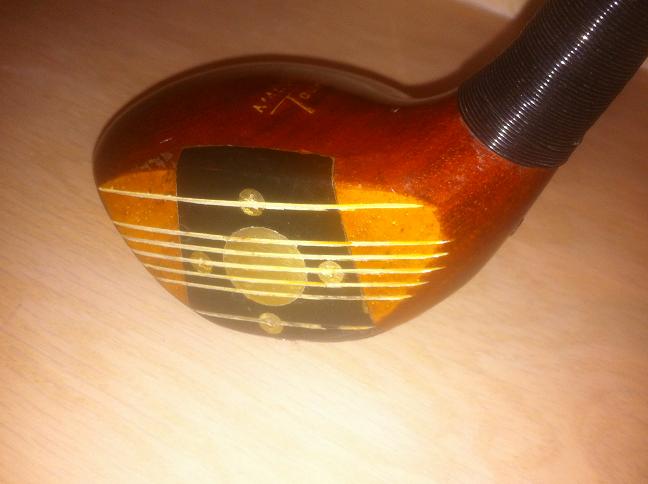