Here is superb old Donald Ross Course that’s been around since 1917. I’ve had the opportunity to play here about 4 or 5 times in my college days. Its about 10 miles from where I live. They are playing the Curtis Cup matches here this summer. If you have 5 or 10 minutes check out the pics, they are great. This course one of the best in our State. I remember making an eagle on the par 4 13th, one day, the hole is hidden from the fairway , so I didn’t realize it until I walked up and saw it in the cup. I remember I was using a M75W driver that day. Its a great course with some superb driving holes. No. 18 is great drive, your on top of a hill hitting down through a valley. These type of courses are somewhat common place in Great Britain, but for us, its a treat to be able to play one like this.

This weekend the Curtis Cup is on TV here in the US…It’s being played on a great Donald Ross track called Essex County Club in Manchester, MA. Check it out if you can. You have to really position yourself around that place with a good short game.

Some bit of golf history there that they surely won’t be mentioning on TV. They played the MA Open there in 1980 and I followed Paul Moran around that place for 2 days who just outclassed everyone with his ball striking and comfortably won. To me he was one of the better tee to green guys I have ever seen especially in New England at that time. Paul was good enough to eventually play the Senior Tour. One time I followed him in Atlanta where he lead the Senior tournament after nine holes playing with Biller Casper shooting a tidy 31 at Country Club of the South. I was also fortunate enough to take several lessons from him later on.

Also, Essex used to hold a fairly decent collegiate tournament with likes of Jim Hallet and Rich Parker in the field. Jim Hallet was on “The Stuff” on the East Coast at the time by playing well as an AM in The Masters and handedly “Dusted My Broom” as Robert Johnson would sing during that Tourney. The reason I bring up Hallet is that I remember he played with very low hands and had a funky swing that lasted about 13 years or so on the PGA Tour. I wonder if Lag ever came across Mr. Hallet during his playing career. He might have been a text book ABS hitter not knowing there was such a thing back then.

Funnily enough Mashie I was exchanging emails with Fred on this earlier and I know he is hoping to get to the club this w/end to see some of the Curtis Cup. Some nice pics / review of the course here:

I still have nightmares about the 10th 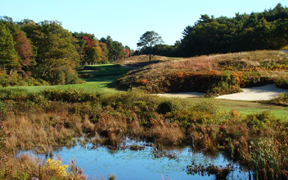