Picked up a NEW set of 1973 MacGregor VIP Limited Editions. 1-SW, and 1,3,4 and 5 woods. They have 1 stiff shafts, so that should translate to x-stiff, and leather grips. I just discovered a little olive oil on leather grips makes them supple and tacky.

Also picked up some Nicklaus 392 balata golf balls. I don’t remember ever seeing them or playing them. They are new, but probably flat. Still I got them for next to nothing so it will be fun to take them out.

I just picked up a dozen Nike RZN Whites. Supposed to be their high-spin 3-piece ball. Now, with my swing being the condition it is in, I may not notice any difference. But it will be interesting to see if I get any increase in backspin on the greens or my ball moves more than normal.

Oh yeah, put a little basil and garlic in with that olive oil. Makes the grips taste better LOL

Played the front 9 yesterday with the RZN White’s. First thing is they don’t like to be lost lol. I hit two or three shots into the trees and the ball kicked back out into play.

Got the VIP Limited in the mail on Friday. I took the driver, 6 iron and 1 iron to the course. I have never had a problem with a long iron since joining ABS. Indeed, when I practice I hit more 1, 2 and 3 irons than any other club on the theory that I am hitting my 2 iron good, I can hit everything else. Well, now I know what Trevino meant when he said even God can’t hit a 1 iron. I couldn’t get the damn thing in the air unless I had it teed up, and even then I only got about 20 feet at the apex.

Here is a look. Note how these blades have absolutely no offset, and the heads are tiny. 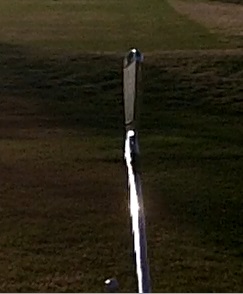 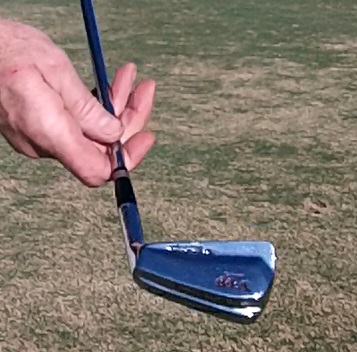 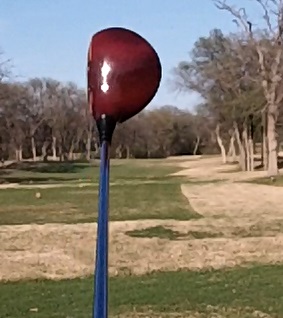 Also, note how the driver head doesn’t have the roll you typically see.

The biggest surprise is the shafts are stepless. They actually have microsteps. Called Tourney Taper.

Nice looking clubs. Are these similar to the Curtis Strange clubs?

Don’t know…these are from 1973 so they would predate any Curtis Strange clubs.

Got the VIP Limited in the mail on Friday. I took the driver, 6 iron and 1 iron to the course. I have never had a problem with a long iron since joining ABS. Indeed, when I practice I hit more 1, 2 and 3 irons than any other club on the theory that I am hitting my 2 iron good, I can hit everything else. Well, now I know what Trevino meant when he said even God can’t hit a 1 iron. I couldn’t get the damn thing in the air unless I had it teed up, and even then I only got about 20 feet at the apex.

your comment reminded me of Adam Scott’s father being interviewed on local tv here in Oz during last year’s Masters. he was asked ‘when did you think Adam was capable of going pro?’ his father responds with “I remember watching Adam at age 14 knocking a 1iron off the fairway straight and high and thinking about Trevino’s famous quote that not even God can hit a 1 iron. Maybe he cant but my son can”

Supposed to be from Tom Wishon:

I did get to meet and spend a decent amount of time that day with Gene Sheeley, who for decades was Mr. Hogan’s personal clubmaker at the Hogan factory. Gene had a separate workshop from the rest of the factory that was sort of like the “sanctum sanctorum” and I was told that few got to venture into this workshop. So that was cool. Part of that time included being able to look at, check out and measure things on Mr. Hogan’s personal playing sets that he had used over the years.

One of the things that was very interesting was that Hogan always played X flex steel shafts, tipped 2" additional for every club. Gene explained to me that he had originally done this back when he fought a hook so badly before he found his “swing secret” that the books and magazines since then have written so much about.

As he got rid of the hook and became the best ball striker on the planet, Gene said he remained with the 2" tip X shafts because he had developed the sense of feel to where he absolutely hated any shaft that he could feel bend during the swing, and especially when he released the club to impact. Even in 1987, when I think Mr Hogan was in his mid 70s and did not play very much anymore, the few times he headed out to Shady Oaks to hit balls, he still preferred hitting these X tipped 2" shafts in his clubs.

So the point is - we develop fitting parameters for shaft fitting but when a player has a very specific feel preference for the shaft, the textbook fitting techniques can get tossed out the window!

It’s been more than 20 yrs so my recollection of the small details is not that good. Among the things I do remember. . .

I was shocked to see how sharp the leading edge was on his irons, especially his wedges. Any other player would hit 80% of his shots “fat”, with this type of leading edge grind. they were also ground very flat both from face to back as well as from heel to toe.

I did not notice that the sole angles were “scoop” which is what they would have to be if they “sat 5 deg open”.

The clubs were all quite flat in lie, also the woods bored that way. And when I say woods I mean wooden woods in his bag in 1987.

Face angles of the woods were closed, my guess at least 2* shut from what I recall. Gene said despite his old propensity to hook the ball badly, this was because of Hogan’s “new swing move” .

And the clubs were HEAVY, I rememeber - both in total weight and in swingweight.

Interesting he had 5 degree open irons and woods at least 2 degrees shut!

Could it be he wanted a slight draw to his woods?

These were his specs late in life so my guess is since he retains the pronation in his BS, he no longer had the strength to get back to square with his heavy persimmon.