Not much of an historian here, but I often think about equipment and it’s journey from the very beginning, and the thought behind some of the changes over time.

Whenever I think of old clubs the first thing that comes to my mind is those long nosed wooden things that didn’t have much face height. Next in line I generally think of some of those specialty irons from long ago like a track iron, which I think was actually designed to get a ball out of a rut made by a carriage wheel.

So to start off trying to gather some information, I am sure most here are familiar with the Browning model irons, which were real low profile, and in some ways similar to the long nose woods. Some of the hickory irons are low profile too.

So my question is how did modern irons get to a point where from the hosel the head flares upward toward the toe. Why don’t irons go straight across from the 5th groove, or at least not have a high toe. Why is the toe much higher than the heel, what purpose does it serve other than to put more mass outward for an instrument that is already seeking to get outward. 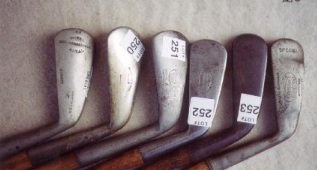 Agreed, not sure why this post got ignored… but it’s a good question.

I have irons that are very toe heavy, and others with shaved toes like the Spalding Bird on Ball and the Hogan Power Thrusts.

Early on, and still to this day it’s natural for new golfers to fear the shank and for good reason. So the longer head shape gives a bit of a buffer away from that. Remember the Jerry Barber shankless irons?

I think Mehlhorn was the first to move more mass behind the sweetspot. Then came the more compact heads. The better players found this to be advantageous I suppose.

My feeling is that the less toe weighted works better for a hitting action, and the more toe weighted for a swinging action as the off centered weight distribution helps the club swing back inline through release.

The lower center of gravity tends to get the ball up… so that might have been more desirable in the feathery era… but as golf balls improved and dimple patterns changed, keeping the ball down became more desirable… so we started to see thicker top lines. No doubt that different designs flight the ball differently for different golf swings.

Offset is another issue that I don’t think came into the picture until much later. The early clubs I own, and my hickory set have zero offset… more like face progression. So in a way, the early designs were better in some ways.