Does anyone know why some persimmons are double pinned like these ones,? with an additional screw where the shaft comes out through the sole?? 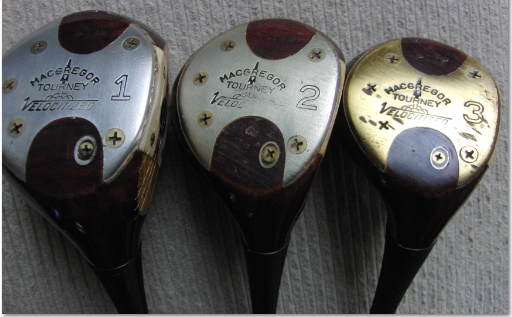 Last night, I pulled the shafts from them and all 3 have cracks in the necks. I could see that 2 of them were cracked as soon as I removed the whipping.
I wonder if they were double pinned because they were cracked during the manufacturing process?? If this is true, then maybe it’s worth avoiding clubs like this for flattening. If that is not why they were double pinned then I have been bloody unlucky with them.

Hmmmmm… where was the 2nd pin located? That must have been some lousy epoxy they used back in the day!

I thought I remembered Dave Woods saying they used that screw in the bottom of the shaft as sort of a "tamper detector"of sorts so they could determine if someone had reshafted the club? Freddiec might know.

How concerned should we be about neck cracks? I thought loading up the neck with modern day epoxy took care of any weakness the cracks might cause. I’m in the process of flattening a Mac MT09 Jumbo that had a neck crack. By the time I filled the hosel and dressed the neck up with epoxy I think it will be stronger than ever.

I believe the screw was used as a measure to expand (put outward pressure on) the shaft plug so it would be less likely to fall out from shrinking or jarring from impact with the ball. It was very common for the necks on wood clubs to have splits or cracks due to impact with the golf ball and temperature/humidity changes, thus the use of whipping to not only make the transition from the club’s wood to the steel shaft look nice…but to also hide those splits/cracks.

As long as the cracks don’t go down into the body of the wood, you will be fine… after dressing up the neck like Robbo said, and whipping… it will be in good shape.

Have been carrying on with them regardless, am pretty sure they will hold up despite the cracks.

It just seemed a bit wierd that they were all cracked before I even removed the shafts and they all had that second screw, only 1 of the previous 20 or so clubs I have pulled have been cracked.

Many of the older persimmon woods featured a set screw in addition to the back screw, especially MacGregors. I am pretty sure that its was just another way to secure the head to the shaft especially when you note the poor quality glue that was used - pre-epoxy period. The black residue on the shaft is a pitch type glue as far as I can tell and is easily dissolved with some mineral spirits. I like to use a tapered reamer to clean as much out as I can before resetting the shaft (or drill out for a parallel tip shaft). You can find the brass screws you need here:https://www.boltdepot.com or save the old ones. If you use a new set screw, you can tap it lightly with a hammer after installation in order to flatten it out to the sole then mill it down as needed. The set screw is probably not necessary especially with the modern epoxies but it looks great and shows some attention to detail. Recommend you pre-drill a hole in the tip for the screw before installation of a new shaft. Grind or file a small flat spot in the proper location for the set screw on the shaft tip to make drilling easier. The actual hole in the shaft tip for the screw can be larger than needed. Mr