I dont know about the rest of the guys/girls at ABS but I love a good divot.

It records golf shot that produced it. I love looking along the fairway at divots left by players (although they should be putting sand in them!! tsk tsk). Some are shallow, deep, across the line, long, short…

Mostly though i see straight divots, wether across the line or along it. Mostly straight. A ‘straight delivery path’ through the ball. Pretty cool.

Recently though Ive been seeing some very strange divots. They start straight, but then curve subtley to the left after the first few centimetres. Hmmm how did that divot come into being?

Sounds like an ABS student may have passed thru there.

I remember spending time on the range… often just taking divots… and not hitting balls if I was working on something. I remember taking out a 4 foot square patch of grass on the range at the BC Open, and afterward I was having a conversation with Grant Waite about some of Mac’s ideas after our round. About 5 minutes later Richard Zokol came over looking for a slot to practice and saw the earth patch removed, and looked at us and said… “I didn’t know Mark McCumber was playing this week”

Grant and I started laughing… it was just one of those moments!

My last round last season and my last shot was a smooth Hogan PC 8-iron from 120 into the par 5 18th green. The divot was beautiful and I remember just staring at it, not even looking at my ball as it landed softly on the green. I’ve thought about that shot a lot this long, cold winter. Funny how one shot can keep you company.

I used to take a full divot in my practice swing so i could feel the shot, so for every one shot I hit, I had two divots. The committee members weren’t too happy about it so I had to stop. I always felt like I lost something by not being able to do it. I was pretty young and unschooled in the game at the time, and I remember being really confused by not being able to do it- I was thinking, ‘why would I take a practice swing if I can’t take a divot, that makes no sense?’ I might have been on to something. I remember I also used it so I’d know where the bottom of my swing was in relation to my feet, and that’s where I’d put the ball for my shot. How did it all get so confusing

Speaking of divots, this is one part of my beginners mentality I just can’t seem to overcome. I don’t know if it came from all my first experience to golf practice with a ton of time on cheap mats or what, but I seem to have a fear of taking a divot. Like I am afraid of messing up the nice golf course or don’t want to ruin the grass or something. Because of this my misses are predominately thin and all of my good shots seem to have been picked clean.

Is there a good drill or something to ingrain this. I can take a divot if I purposely try to without a ball but a ball seems to revert me back to a subconscience ball picker.

Divots… Jim Thorpe would take a divot home as a souvenir from each course he played and plant them in his backyard. Over time, he completed his whole backyard!

Is there a good drill or something to ingrain this. I can take a divot if I purposely try to without a ball but a ball seems to revert me back to a subconscience ball picker.

Every now and then I will get a long piece of stiff wire and tie a piece of cloth at the end of it, bend the wire enough so you can swing under it and stick one end in the ground. Position the wire (cloth end) just above your hands at address (even just slightly target side of the hands). Just anough to swing under the cloth. Try some slow swings getting your hands back to impact at the same height as address.

Stops the natural tendancy to stand up or raise the hands through impact. Also helps me get that ‘pulling everything left pivot drive after impact feeling’ back if I start to lose it

I think divots are mainly about the grip. Where you grip and how you grip it. Unless you are Moe who had the ball up in his stance a bit, the club well behind the ball and stood a mile away. Hogan loos like he took average sized divots to me. Of course, some of his clubs had negative bounce, so he couldn’t help but take a divot.

Flatter lie angles really do change the shape and depth of a divot.

Nothing like taking one of those long thin divots that sweeps slightly left past impact.
That’s one good thing about playing off tightly mowed turf that’s like thin mud pan underneath. It’s easy to catch it a bit heavy
but when you flush one off those conditions… nothing better.

How long and how thin do you get them, lag?

How long and how thin do you get them, lag?

I guess much will depend on the shaft you are using. This divot was produced using Lags set of 1959 Dynas set 6 degrees flat with X shafts in. I believe the stiffer the shaft the more subtle the entry / exit shape. Certainly I have produced more pronounced “fish hook” shaped divots when really trying to crank a heavy regular shafted iron. 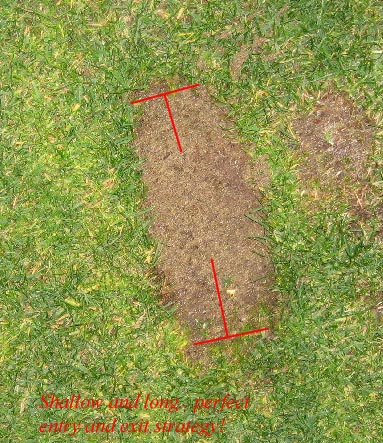