As Bob brought this up I thought it might be a useful topic - first here is the original exchange from the other thread:

Having a loft and lie machine is great…I have an antique one, but it bends the clubs just fine… and is as accurate as I need it to be. I also like to bump them around a bit so they fit my eye… because I want an iron to look right also.

Your divots will tell you more than any machine ever could… because not only does a divot show heel to toe flatness or upright… but it also shows path, and steepness or shallowness…and of course alignment.

Have you provided a tutorial on “divot divination” at any point? I have always thought that this was Hogan’s “dirty” secret! (bobscottjnr)

The pattern of the divot will also be affected by the shaft flex of the club you are using. Here is a pic from one of my better swings (with a 7 iron) from my game with Lag on Monday. Admittedly it was much easier to see in person but hopefully you might just about see that there is a hint of entry from the inside, the tiniest bit of heel heaviness and the path of the club going slightly left after impact. This was using Lgs set of 1959 Dynas (6 degrees flat) with a X100 shaft so you don’t quite get the pronounced fishhook shape that you might get with a much looser shaft but its interesting nonetheless. I was pleased to see this as until I started working with Lag my divots were all pointing to the right of the target and were toe heavy even with standard lie clubs. 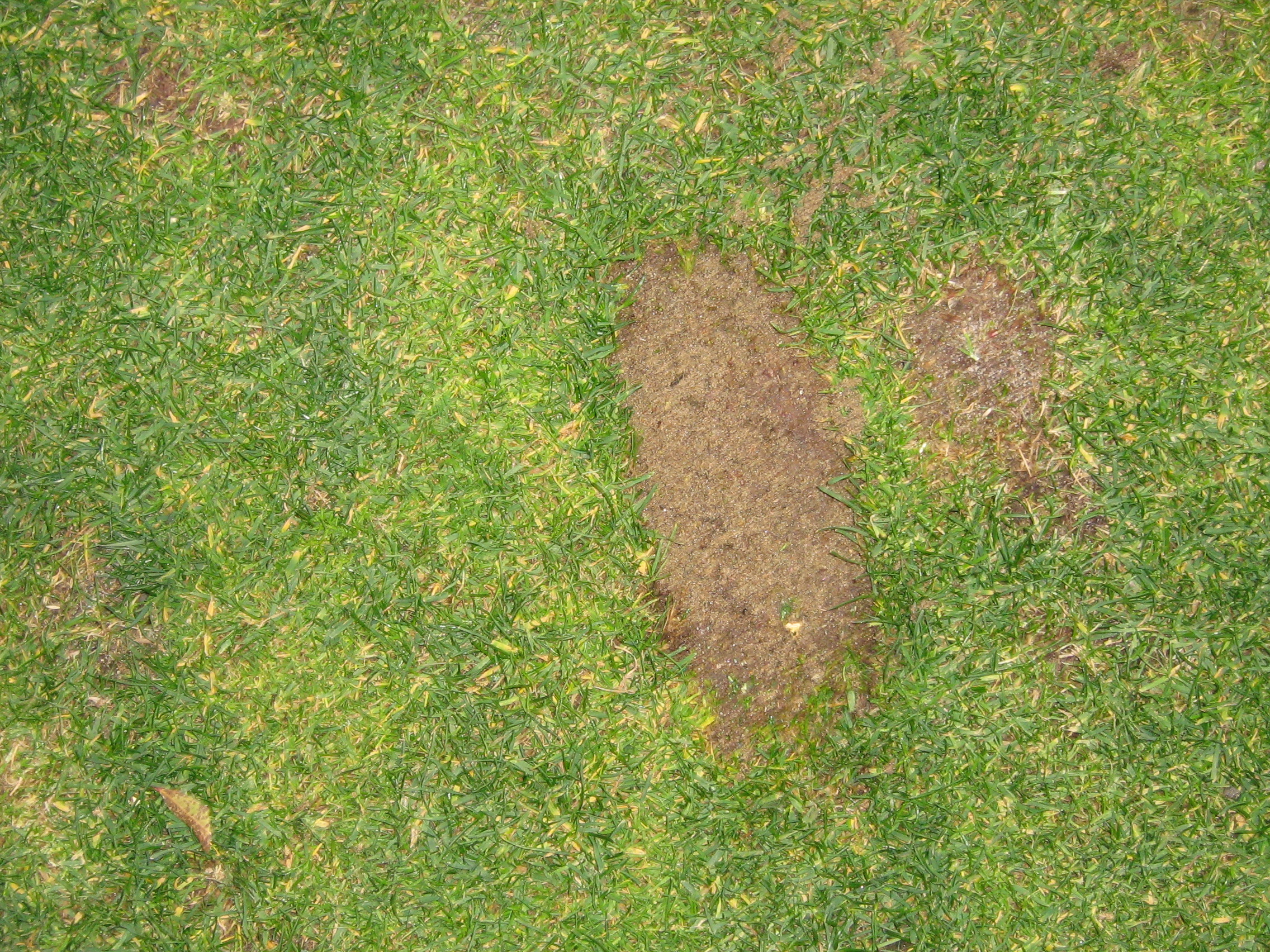 Christ, i don’t know what’s improved more since i joined here, my ball striking or my vocabulary.

Mind you the latter was fairly egregious to begin with.

I was there… I saw it … it was flush… and the shot was right at the pin setting up for a nice birdie putt to a tricky uphill green.

The ball doesn’t lie, and neither does the divot.

Christ, i don’t know what’s improved more since i joined here, my ball striking or my vocabulary.

Mind you the latter was fairly egregious to begin with.

My divots have been scaring me recently. I take out huge chunks that are very heel heavy and are pointing straight left. It’s remarkable how I set up straight and see my divot facing almost 45 degrees left. Needless to say I hit huge banana balls to the right from 7 iron up. I’ll also hit the occasional pull straight 15 yards left. When I step back with my right foot to set up for a draw, I hit it straight. So I’m pretty sure that my swing plane is very upright which causes an out-to-in swing path and, hence, the bananas.

I’ve read in this forum a lot about how flattening out irons will take the left side of the course out of the equation. But what will it do for one that hits slices to the right? My guess is that it will flatten my swing plane, which by necessity will prevent me from coming out-to-in at the ball. At worst, I can still banana it right, but it won’t be due to an out-to-in swing path.

Am I on the right track? (BTW, I just started on Module 1 recently.)

Divots are better than trackman!

I look at every one of them, now that I know what I am trying to achieve. One of the things that I love about a good divot is that they should start shallow get deeper and then shallow out as opposed to taking a single depth divot that you can bury a poodle in

Seems like for nearly four years removing terra from firma has taken a back seat.

Interesting picture here that I suspect gets into heel heavy divot patterns, and some other things. The splash of dirt is pretty nice. Much like the splash of a broad jumper landing in a pit of sand tells something about impact, weight distribution, speed and some things, so does the splash here as Bom would say…“I reckon.”

Any ideas, beside my own, why the dirt has traveled more skyward closer to the player than the outside. It could speak to a few things, but one thing for certain, the entire splash is subjected to the same amount of countering gravity as the dirt goes airborne.

Why is the outside lesser in height than the inside given the same amount of time. 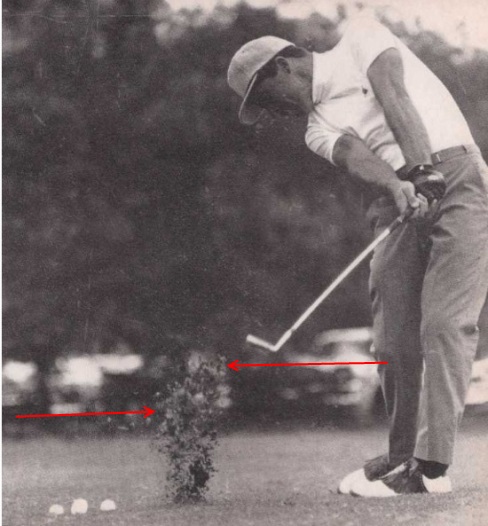 Not sure,
but I would also suggest a slight heel heavy divot.

Heel heavy divot, but also path. If you are cutting it left correctly I would expect the divot to be higher on the left side.

The splashes are like little ‘CSI’ puzzles, ripe for interpretation and analysis.

I agree nfbandon about the heel heavy aspect and path. I like to call ‘heel heavy’ the same as ‘toe light’ especially on a curve, or toe coming in last compared to heel.

Rodgers gave a good description about the toe aspect saying that if the toe closes, it becomes lower than the heel relative to the leading edge, or the same as a toe digging more, which is not good. So I like either one actually- heel heavy, or toe light. You can see the toe clearly on the Player picture and it has remained high and has not closed relative to centerline.

Here is another real good splash, in which the outside effect splash is higher than the inside splash relative to Hogan. Lots of stuff in this one. 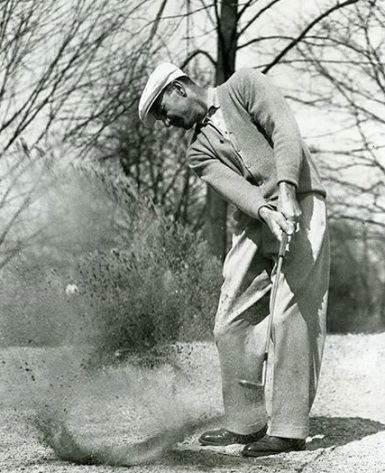 For that sand shot, I suspect he is sending the ball out to the right with an open stance and thus the sand being higher on the outside. Notice the ball flight and the direction of the sand being the same.

Also, notice there is very little angle left between his Hans and the shaft. He released it to slide under the ball, and that might cause the sand splash pattern.

New student here and just graduated module 1. I have been playing for 2 years. Picked up the game late in life through my three sons who started playing. Lag suggested I post this pic. I have always scooped or picked the ball and have never taken divots. Mod 1 and 10,000 reps are changing that. I hit both these shots with a pitching wedge 5 degrees flat from a 100 yards. Both were 5 ft. inside the pin. I like the bottom one the best as that piece of turf flew left after impact. 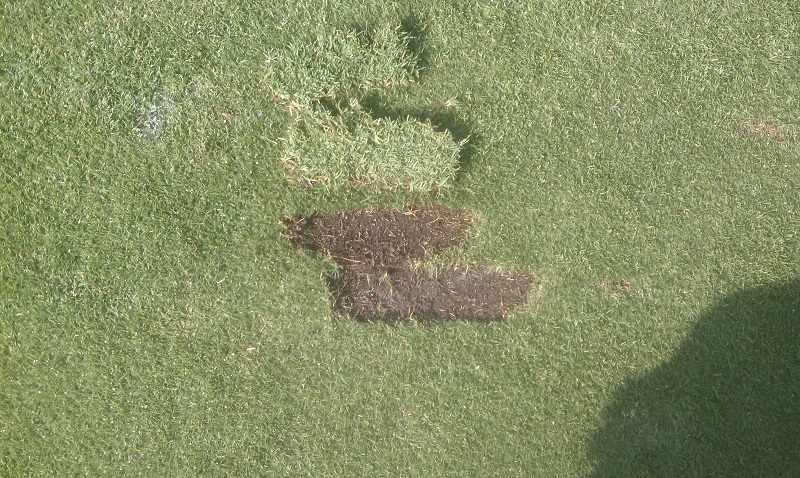 Sometimes they are so pretty it’s hard to replace them.

Not only good for eating but good for golf.

From good lies, my divots are now becoming shallow,
…almost non-existent.
Just giving the fairway grass a buzz cut.
Much less digging than in my previous golfing life.