Hey Guys,
I made an effort to try and fix 1 of my botched heads for flattening, went epoxy and sawdust trying to rebuild the neck,(lost my original pic of this one but it is on my earlier post, ) can anyone tell me if it appears
structurally decent enough for the rebore attempt phase!! Also, I am hand drilling and already having anxiety issues about getting the hole centered good, any tips. Got a little frisky with the sanding, hopefully some 400 grit and clear touch up with get it looking decent…, thanks for the support as always! 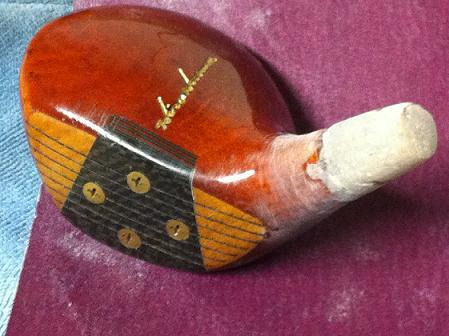 I would cut off the top of the neck (the part you have built up with epoxy) so you can start the drilling lower down and further towards the heel. It will be easier to rebuild that (using 5 minute epoxy mixed with sawdust) when the shaft has been fitted.

I’m not sure if it’s structurally sound enough but wanted to tell you what I do if it hasn’t been said already on the re-bore.

I start off with a very small diameter bit and use a few increasing dia. bits to work my way up to the 3/8 ths. This way I can check my angles several times as I go. It’s very easy to get the lie right but accidently drill the hole too hooked or open if you are not careful…Shimming later with a toothpick might not be enough if the bit walks too much.

Nice, thanks for the tips I 'll get cracking,
hopefully the next post will be of a completed club for show and tell !

Well I cut the neck, drew my lines and clamped up in a vise, bad thing is my 1st pass with a smaller bit was WAY OFF line
and I never recovered from there !~

I finally had to abandon this one… need to chill out for a bit before I try again!
This is a character builder to say the least !!

It’s a good idea to draw some guide lines on the head, or at least on a piece of tape attached to the head. That way, you can visually confirm you’re on the right path with the drill bit.

Good idea jrich,
I was considering getting a mirror to see the heel side line as i scoped out the face one view of the lie angle of the bit…
one thing I am struggling with is clamping the damn thing so it is sitting square in the vise when drilling and not moving , seems like you need a jig or something to hold it tight, true and level before starting to drill…