OK…so I have heard some internet rumours about Count Yogi…how he was the ‘greatest’ golfer ever… yet until someone on Iseek mentioned him in a trivia question about 18 months ago, I had never heard of the guy.
I found his ‘bio’ online…it sounds a little far fetched to me (attached below)…surely if he was that good he would have done more than win a few events with ‘pro-am’ title names attached to them. Especially the last one that he almost never scored above 69 as a professional…I am assuming this is a huge exaggeration on someone’s behalf especially playing in the Hogan, Snead, Nelson era… 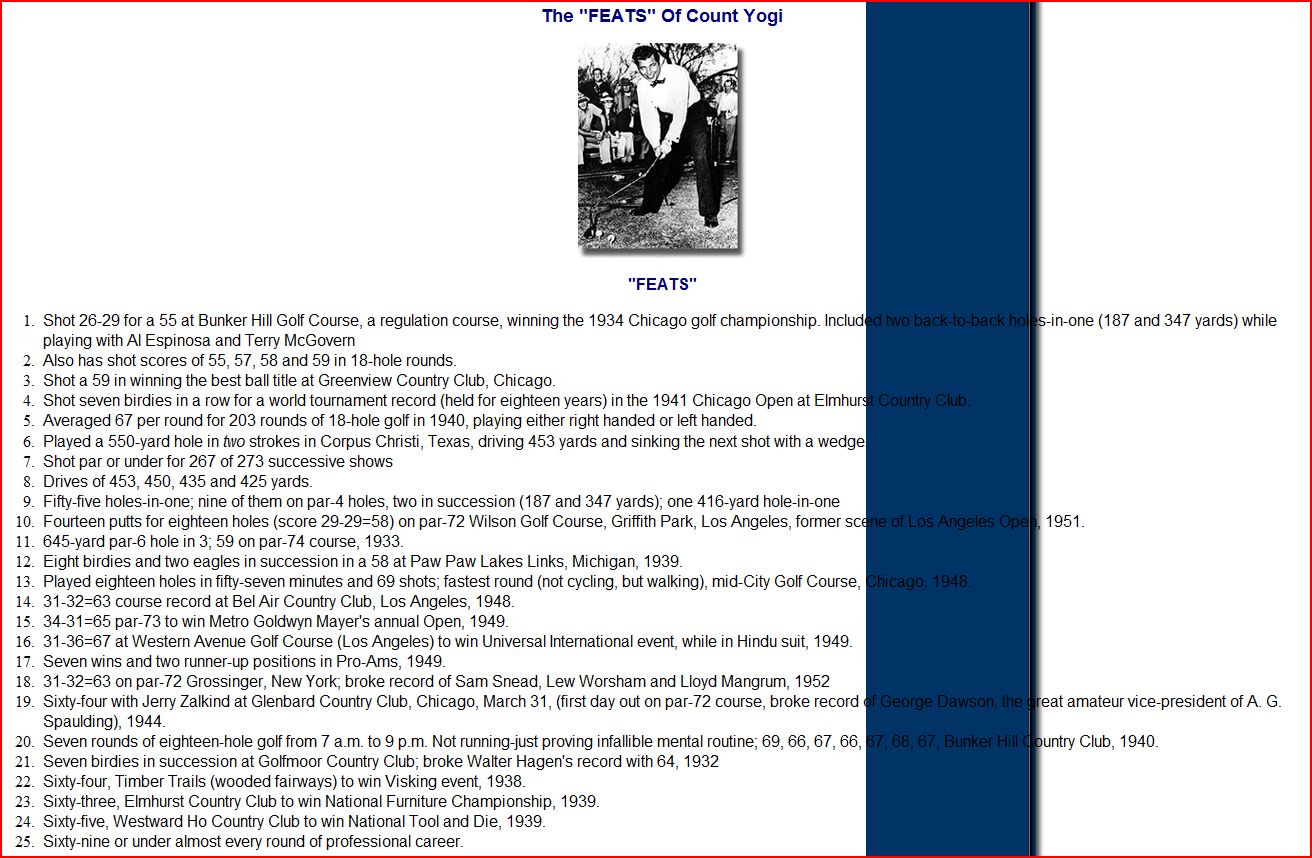 Just thought some may have never heard of him either…and I was the ultimate golf historian junkie growing up…His name appeared on a cartoon with Boo-Boo, but not in any golf books I ever read…this has to be someone stretching the truth for their own benefit in some way , shape or form

Here’s another picture. Maybe there is some truth to the hype. 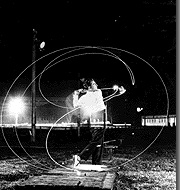 The Count did a clinic at my home course when I was a kid and I watched in amazement all the different trick shots he did… swinging a 60 inch driver… hitting balls off 4 foot high tees, and other oddities.

What stands out in my mind so clearly to this day was him hitting a golf ball with another ball the size of a golf ball made out of steel and on a chain attached to the bottom of a shaft and flushing one after another. I still don’t know how he did that. It was like David Copperfield hitting golf balls.

The guy was good… not sure about all those records… but he was one hell of a trick shot artist.

If this is him he flexing that shaft like hell.

And of course somebody is now trying to flog his method.

If this is him he flexing that shaft like hell.

? How could you possible tell that from this video? You can’t even freeze frame clearly enough close to impact to make that statement.

I thought being at ABS I would get away from hearing about this guy like countless other forums and blogs who talk about unicorns.

Of all the internet made golf legends with no tour earnings to speak of, I think this “Count Yogi” tilts me the most. A trick shot artist has migrated into having had all these ridiculous unverified records and a legendary, mythical swing (where it is claimed he hit UP on the golf ball. Never disturbed a blade of grass I read somewhere. Only the deepest of idiots wouldn’t realize this is impossible on level ground and not using a tee). Hit 400y+ drives, nine hole-ones on par4’s (and even two in succession!), etc, etc. I mean who was “verifying” these things? His buddy? Sounds more like him and his friends got drunk and wrote a list one night while laughing and saying “lets carry this around to proclaim you as greatest ever. People will believe it if it is written down”.

OR as Steb said, there of course is someone fledging materials to teach you his “methods” of “boneless”, mental relaxed fluid elliptical swing. His “Platform to Perfection” board and a few books I think sells for $200. Even better his grandson or something, who Count told him on his deathbead of course he is only one who knows his swing, will give you private 3-day lessons for $5000! UGH. Is there really that many suckers in the world? Yes… There is a 1200 something post count thread at Golf Channel regarding this guy and how some have “felt” the Yogi way.

Lets take the average golf course size of 6500 yards. So 18 holes, 57 minutes = 3:17 minutes per hole. Actually I was going to break it down more but lets just do it the easy way as it still is so easy to debunk this is silly. 6500 yards is roughly 3.75 miles. The average healthy human walking speed is about 3mph (give or take) So right there alone he would have had to teleport himself at some point just to make 3.75 miles by itself! Let alone throw in actually having to stop/start for the easy little game called golf that is being played while walking. But of course he was unique. He could just hit hole in ones at will and walk quickly to next hole never having to putt.

Mike Austin, the other Internet legend that never won a single dollar on any pro tour, reportedly was close with Yogi. THAT doesn’t surprise me…

I thought being at ABS I would get away from hearing about this guy like countless other forums and blogs who talk about unicorns.

Sorry for bringing him up Budman!!!

Sorry for bringing him up Budman!!!

I was only joking…

I think if this is the guy, he embraces a lot of ABS prriciples at P3.5 e.g Right foot firmly on ground; bent right elbow; bent left knee (I am not sure???) and of course shaft flex. I did not even hear of the guy before. Other forums may promote him for the wrong reasons. As for the very shallow divots, may be true too because he does come from an extremly shallow angle. 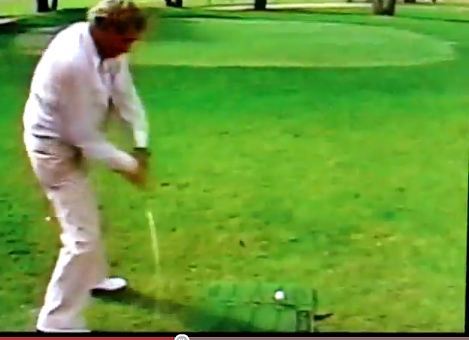 I think Count was probably golf’s equivalent of Curly from the Harlem Globe Trotters. Probably could have played the big leagues, but found
he could make more money doing trick shot shows. Back then the purses were much smaller, and he could do two clinics a day, travel at his
own leisure and make a good living… and have a lot of fun. He was basically a magician with a golf club. I still can’t figure out how he hit golf balls
with a small ball on the end of a chain attached to a shaft. I remember him setting up to that and thinking… no way. And he hit it.
He was good at what he did.

Way, way back in the early days of the internet on the Usenet group rec.sport.golf - I used to do reviews of golf tapes, golf systems and golf improvement gadgets. I’d write various product purveyors and many would send me their item for free to review. Gerry Hogan was actually one of those people with his video “The Challenge”.

IIRC, the “Count Yogi” system came with a book, tape and a golf mat for ball placement, foot placement and the take-away. Count Yogi was first and foremost a showman. He enjoyed the lime-light and hung around with well known celebrities, athletes and anyone else that could boost his credibility or his wallet with gambling/showmanship.

The video contained a bit of history, some raw footage and then some esoteric lessons from The Count. Terms like “boneless”, taking away the club “neatly”, etc. were always used. There was little doubt that he was very ritualistic in his approach and I believe that was part of the act. He fell on very hard times and was homeless. His look in 2M’s video was not because he wanted to look like an Indian guru…he was on the street and unkempt. The video actually showed him in a barbershop getting cleaned up while espousing his feelings on health and golf.

He described the swing as taking the club back along our 4:30 line and actually “looping neatly” back into the ball. The loop however was essentially OTT. The mat included with the system was very high quality, and the video and book was predominantly non-technical in nature. I believe it would’ve set me back $40 at that time.

I think “Count Yogi” was the real deal with the ability to golf. No doubt the scores and “accomplishments” were embellished to help reinforce his persona. There is also no doubt he was quite eccentric especially toward the later part of his “career”.

I’m glad there are people like Moe, The Count, and Mike Austin amongst others. Nothing wrong with some good old legends of folklore.

Was his downswing over the top?
Or was his backswing under the top?

Hmmm…good question. We’re talking a good number of years ago when I viewed the material for my review. The video included him in at a driving range in the 70’s (? - given the clothing style) and he looked to be in his 60’s then. Some stuff like 2M’s video and a couple of other short clips. He was thumping balls (even at his age) with his persimmon driver and crushing it wish his irons. The quality of the video wasn’t good enough to tell where they were going, but the sound was there. Beautiful balance and the requisite showmanship.

IIRC, Count Yogi believed in taking the club head back inside (simply?) and making a loop (neatly?) into the back of the ball. The Count’s swing reminded me of Sam Snead’s recount of the golf swing being like placing an apple on the end of a stick and flinging it to the target. The motion was inside going back and OTT coming into the ball. It’s a swing…no doubt. It’s a dump to right field…no doubt. It’s accompanied by a great pivot…no doubt. He also believed in hitting up on the ball.

Sorry…that’s the best I can recall, astro.

The guy was using a nunchukca swing, not a golf swing.

He would have had zero, and I mean zero, pronation / supination in either forarm. Maybe a bit of Elk’s “playing the picollo” at the transition, but that’s it.

Reminds me of a video I saw once featuing Chi Chi doing something similar with a driver head clipped to a dog leash.

Thanks for the reply. I admire this discussion board from afar as a reader. Full of great stuff.

Interesting that you mention Chi Chi Rodriguez. Legend has it that Chi Chi could hit two balls in rapid succession. He would slice one ball, and hook the other. The two balls would collide in mid air. Legend also has it that namesake of this thread could do the very same thing.

It seems odd that both golfers would mention this seemingly impossible shot. Somewhere on the internet, I know I have seen an interview of Chi Chi staking his claim on this trick shot.

I can hit two balls at once with one swing…one starts right and draws, the other starts left and slices…and end up falling to the ground pretty close to one another…I can’t say they have ever hit one another mid air however

Anyone can do it…I would think?..all you need is 2 balls resting against one another side by side…a 5,6,or 7 iron for a bit of loft and power…fit both balls across the face…and swing away…there is no trick to it…it just happens…why? I have no idea, It’s like one toe hooks and one hosel shanks but they both feel like a solid strike…I do it at my kids golf camps for a bit of fun to amuse them and distract them when they start spearing each other with their clubs

why? I have no idea, It’s like one toe hooks and one hosel shanks but they both feel like a solid strike…I do it at my kids golf camps for a bit of fun to amuse them and distract them when they start spearing each other with their clubs

Maybe the inside ball is struck slightly before the outside ball (with a closing clubface)? The inside ball starts it journey slightly more to the right than the outside ball, they meet briefly just after impact and impart some slice/draw spin to each other. All a guess hehe but I now have to try that when I get home!