I am starting this thread to see what people like to wear on the course - from a comfort, style, and function standpoint. My motivation for starting this was an episode over the weekend where I went to look at golf pants and almost died of sticker shock. I also stood in front of a display of soft spikes for almost 30 minutes trying to decifer one cleat from another.

The only advice I’ve ever heard that made sense from a style standpoint was a quote supposedly from Ben Hogan where he said he’d rather have people notice his swing rather than him. In other words dress conservatively so only your swing stands out.

I passed on the pants for now. I am not going to pay King Nike $90 for a pair of pants. As for the cleats, I went with Black Widows from Softspikes. The sales rep said they were the stiffest he had.

What do you guys like for clothing and shoes?

Thanks for the input.

As far as clothing, I play the cheapest stuff I can find as long as it is reasonably light so I don’t sweat to death in the summer.
I have had trouble finding spikes too, but I have been playing Champ Scorpion Stinger spikes. Not 100% sure on the spelling, but they look like this: 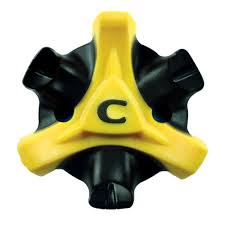 I saw those, too. I went with the Black Widows because they had four spikes instead of three, but otherwise very similar in stiffness and length.

Oh why have they outlawed metal spikes down here in SoCal?

Unfortunately it is the norm everywhere now, not just SoCal.
I can’t see how it hurts the course unless some idiot drags his feet on the greens, but maybe courses are protecting the clubhouse floors? If so, it would be simple enough to make rules for that.
Oh well, and an update on the black widows after you have some time with them would be great. I like the scorpions alright, but I had to replace them faster than I hoped, the tips wore off after about 4 months of frequent use. But the traction is good as far as softspikes go.

Deer hoof tracks are far worse than anything I’ve ever seen from metal spikes.

I’ve seen marks on the greens where people have dragged their soft spikes as well. I am tempted to get some real spikes and see if anyone notices. I don’t plan to be in any SCGA tournaments this year anyways.

I had some luck finding a pair of golf pants for not too much money. Went to the Adidas Outlet store a few weeks ago and found some nice lightweight tan trousers. Ended up costing me about $25 or so with the special they were having. Pretty comfortable as well. Nike didn’t have anything close to my size and Puma was way too expensive. Plus I didn’t want to look like Ricky Fowler

I used to wear metal spikes in highschool, Went to softspikes when my newest pair had them in there. When I practice on the range I love to hit balls barefoot. It does great things for my balance. Only time I miss metal spikes is just walking up and down the terrain at the course if its damp or slick.