Can anyone tell me if these are good Hogan's?

I’m pretty naive when it comes to the various Hogan irons… does anyone know anything about these? 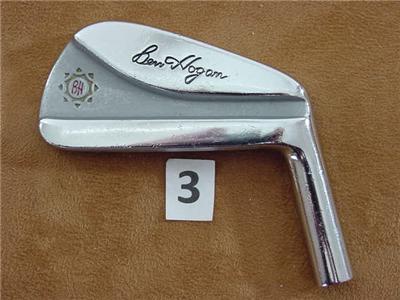 99 Apex, a lot of tour players had that in the bag between 98 and 03. Made in Japan, how good it is depends on what you’re looking for. Personally I think the sole is too big and there’s too much bounce. It’s a lot like the 88 Redline but boxy with that channel. Has a lot of offset for a Hogan and I think it sits shut.

those look to me like they are 1994-1997 model known as channel backs…not 100% sure as Im no expert…
if Im correct, these were not made in Ft Worth…Im sure some of the guys will have more to say…
bent

I took a look at the archive and that is the channelback. That’s even worse, the finish of that one looks like the finish of the 99. The CB is a really long blade and looks to me more like a game improvement head than a players blade.

Thx guys. Not what I’m in the market for so I’ll pass on them.

I play G40’s now (golfsmith anniversary set). Darn near zero offset, thin topline… love 'em. Problem is that their cast and I can’t bend them as flat as I want.

Any recommendations for me that may fit my current profile: small head, thin topline, minimal offset… cavity back or muscle preferred, but not necessary.

cavity back or muscle preferred

Here you go…
a set of classic Hogan Bounce Soles, the same model I play

look no further…
with #4 shafts to boot…

If you don’t buy them I will…

just make sure the “sure out” sand wedge is surely not in your bag… use that as a garden potato digger.

That wedge looks like something out of Aliens. Unbelievable that there’e no reserve on that set, that’s crazy good shizzznyit…

Here you go…
a set of classic Hogan Bounce Soles, the same model I play

look no further…
with #4 shafts to boot…

If you don’t buy them I will…

just make sure the “sure out” sand wedge is surely not in your bag… use that as a garden potato digger.

i just saw this thread now, while perusing this forum (instead of working). i bid and won these irons last night. i’m sorry if i took them from somebody else from ABS, but i really didn’t know i competing with others here. i was very interested upon seeing them listed in ebay, as both lag and sevam1 had already written very highly of them. i probably paid way too much, but i would have pissed away the money on something else far less worthwhile.

i will surely leave the sure-out out of my bag. i don’t have a garden, but maybe i can use it as a cat litter scooper. seriously though, is the hogan special si any better?

again, sorry for taking them from someone here. had i seen this thread earlier i wouldn’t have bid.

Any thoughts or comments on the Hogan Medallion Forged Irons? Anyone hit them? How would you rate them?