Breathing life into an old set.

Posting I hope an inspirational picture.

I thought it would be unlikely I use my old hogans again. The offset was very hard for me to look at I think someone had strengthened the lofts over the years and to me now they looked very ugly. They had loose shafts in them them and were very short.

Armed with a sense of “nothing to loose” I decided to try removing the pinned shafts and bending the offset out of the short hosels.

Now with the old shafts extracted and X-stiffs and new mint grips they feel awesome. I freshened the paintwork. After much tweaking I managed to get most of the offset out but unfortunately lost the wedge in the process! Still to check weight but the are feeling heavy. Hit one out back and it felt lovely.

Just was excited to have a set back I thought Id never use again and thought Id share.
Im not a club maker or anything just a guy that likes to give it a go. I hope this may encourage others. 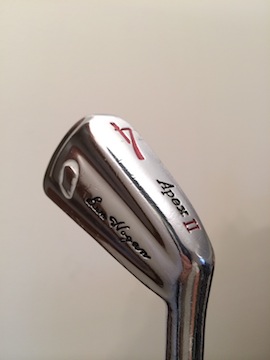 Nice job Ian. I have a set of Hogan Apex BH Grinds from the early 90s that I really love to hit. My goal is to probably have those ABS’d and make those my gamers. Mine have Apex 4 shafts so I probably won’t change those out, but you never know.

Thats why I bought those Les to be my abs gamers.

I didn’t think about offset or hosel length before abs!
After John turned me on to that it became harder and harder to look at and now I just can’t look down at a club with a bunch of offset.
I have a set of 58 dynapowers that need shafts I can’t wait to set those up I think they will be tough to better. Also a set of mac dx’s with propel 1’s on the way.
I really enjoy these old clubs I think they are so cool. I really enjoy taking something that may have been destined to sit in a closet or attic for another 50 years and using it for what it was designed! I get told all the time I can’t hit them. One guy even asked me what I was trying to prove lol.

I have a problem.

I can’t find anyone down here is SoCal who knows how to remove offset. Lag is not far away though so at some point I’ll probably just leave the Hogans with him to ABS. My Wilson Staffs have some offset but so far it hasn’t been a problem.

Looks great Ian.
I just re shafted a set of Hogan irons as well. The pins were a pain but I think it will be worth it