While I am the first to admit that 2D renderings of 3D golf swings can be deceptive, I will say that as a bit of a vintage club collector, I have never seen a persimmon from the mid 1940’s or earlier that set upright by any standard. My persimmons I have set up at 48 degrees with the driver and 50 degrees with my 2 wood.

I threw a protractor on this image for fun…

Looks like a club I would be comfortable playing with out at Mare tomorrow.

Interesting observation. I have no doubt it would be sub-50 degrees. The only lefty persimmons I have come across that were anywhere near that old (about 1945-1946) set up at about 48 degrees too.

When and why did clubmakers start with the upright era? What made them think upright was the way to go especially since humans haven’t got taller in the same amount of inches as clubs got upright in degrees over the last decade?

It started in the 60’s a bit, then slowly more and more over time. Nicklaus probably started it. Everyone wanted to hit it high rather than straight. The club designers went from tour players like Penna and Hogan to MIT hackers like Solheim using wind tunnels rather than Sam Snead. The new so called scientist designers were thinking of their own swings… not a proper golf swing. So of course hackers come OTT and very steep and upright so they designed gear to accommodate. Then they put offset on the club to help hackers stop from pulling the ball. But this can only help to some degree. Then came longer and lightweight for more clubhead speed… but at the expense of feel. Then came the big heads so they won’t whiff the ball.
Hackers don’t feel the club anyway, so the selling point is the velocity and distance angle because that is all a beginner can really relate to. So the pros today are really just the best hackers. The good strikers have all lost their swings from playing the new stuff. No advantage to hitting it straight. No rough on tour like there was. Not many trees to contend with because trees block spectator viewing. The modern pros have developed their swings around hackers gear. So now everyone is playing the checkers version of golf, not the chess version from before. It’s been dumbed down for the masses to try to grow the game to the detriment of the game itself. The final link in the chain is a golfer standing on a tee box with plastic spikes mounted on tennis shoes.

So where is the next “Hogan”? Somewhere in the future when there is a generation a whole lot smarter than this one.

Lag,
Any chance you can whack a protractor on this one for a modern example comparison 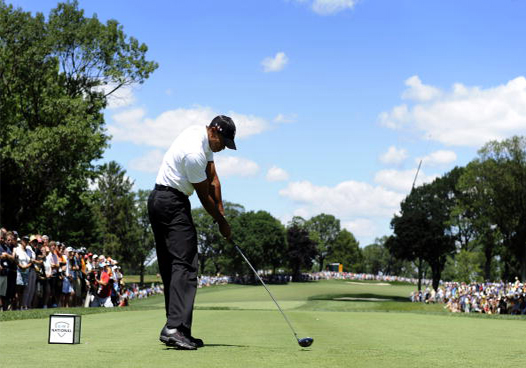 Being newish to the game when I first used a new driver and put it flush on the ground I was baffled why the handle points at my sternum? Im 6 feet tall and I couldnt understand why they are so different from irons?

Obviously meant to be hit with a very raised toe or very high hands?..

Seems stupid and illogical to me…

That’s probably fairly accurate. Most modern drivers fall in the 58* to 60* range.