If Bobby Jones could have one shot again then it might well be his tee shot on the 13th of the Old Course at Sunningdale on June 16, 1926.

Agonisingly, he let it slip off line and the ball rolled into a greenside bunker from where he splashed out and holed his putt for a par. Not that agonising then, but only because you fail to see the context into which this mild aberration is set.

That day, Jones completed the Old course in 66 shots with 33 on the front nine, 33 on the back, 33 putts and 33 other shots. A delightful symmetry in numbers, but an even more delightful feat to have witnessed in person because Jones didn’t mishit a single shot (apart from the one on the aptly numbered 13th).

His biographer, OB Keeler, wrote later that his man had neither a two nor a five on his card. The course was listed at 6,472 yards, but this was an Open Qualifier and it was playing much longer off some new back tees. If a player today had used the same clubs that Bobby Jones required in 1926, then he would be covering a distance of around 8,400 yards. Now do you see why following route 66 was definitely in the fast lane?

It is, without question, one of the most famous rounds of golf in the history of the game. A near perfect round on a near perfect course. For as Jones will never be forgotten, neither will the venue that day. This was the round that put Sunningdale on the map. 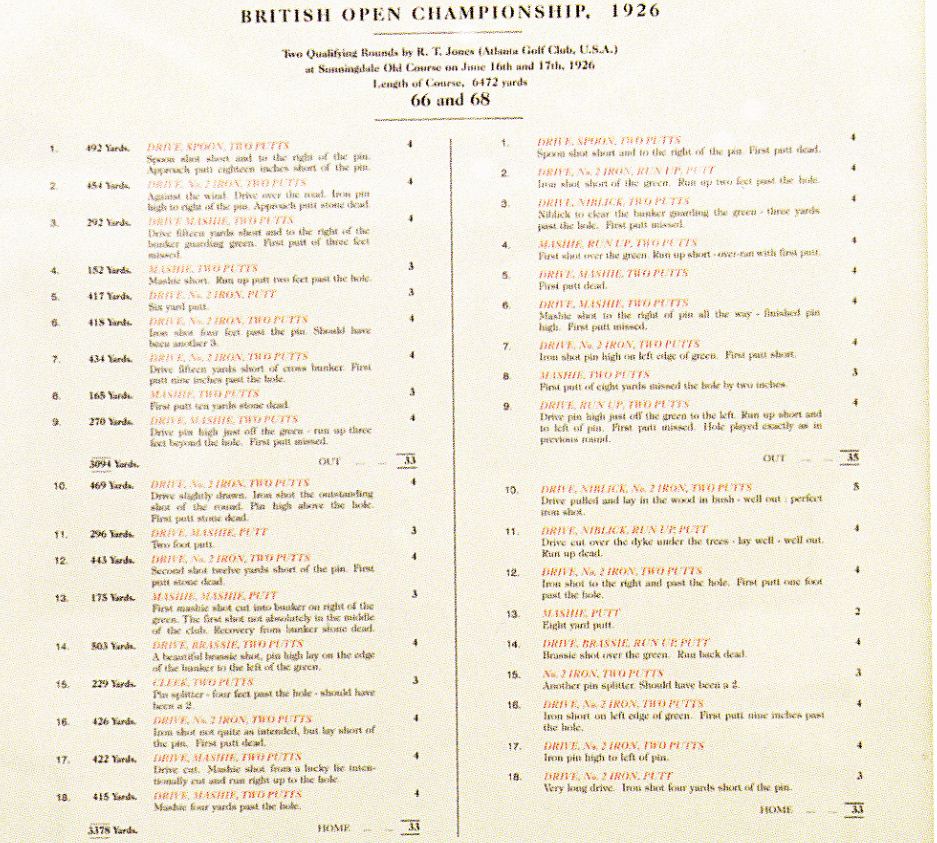 It’s all the fairway wood and long iron approaches that make this so remarkable. People yawn at 66 and 68 today because guys are hitting wedges into every par four or short irons. Par 5’s are now par 4’s compared to this era so a 68 today is really even par and that is still wedging into the par 4’s.

People need to be re educated about this game. Proper golf requires all the irons, short, mid, and long to be hit into par 4’s. That is why par 4’s were created in various lengths so that the players would be tested correctly and have to hit their approach shots with a variety of trajectories also.

These great players did so much for the game. Left us some of the greatest golf courses (like Augusta) and beautiful properties for us to play on… yet they are so disrespected by the actions of the governors of the game.