I recently got an old Maltby loft/lie machine. It is nothing more than a vice and a bending bar. Of course, it doesn’t have a built in measuring device like the new loft/lie devices. The guy I bought it from said he just uses a magnetic protractor (there is a device on the side of machine where you can lock the club in for measuring. I can’t for the life of me figure out how to use the magnetic protractor, which is round. Can anyone help me?

A picture of it would be helpful. However, if it is a Maltby protractor, there is probably a metal magnetic strip on the underside of the protractor and the entire device is placed onto the metal shaft and the metal strip holds it to the shaft for measuring.

Hope that helps some.

No, the protractor is something I purchased in addition to the Maltby bending device. Golfsmith has them, but I got mine at Northern Tool. Here is a link to a picture on the Golfsmith website:

i have a similar set up but instead of the round protractor I use a magnetic spirit level from Home Depot that also has a digital readout that shows the angle of inclination. The protractor that you have can be used in the same way. With the club in the vice place the magnetic side of the protractor on the shaft. This will give the current lie angle assuming that the club face is horizontal. Bend the club and measure again. This set up is alittle cumbersome but it works.

I hat to be a dumb@#$ about this but i still don’t get it. There is a place to the side of the vice to secure the club on the vice platform with the face lying flat on the platform. I just don’t know how to use a circular protractor to measure the lie angle. I would assume you want to set it down next to the clubface with the “0” flush with the heel end of the clubface, but that just doesn’t seem to work with the circular face of the protractor. Where do you get the reading with the circular face? With a semicircle off a flat base (like a regular protractor) it would make sense.

Like this, flat magnetic face of protractor on shaft. 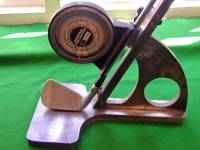 What you have to make sure of though is that the groove lines on the clubface are horizontal (club isn’t top up or toe down). You also want to make sure the shaft is straight up and down from caddie view, i.e. the clubface isn’t delofted or add-lofted.

If your device doesn’t hold your club in the typical address position like above then you’ll have to do more than one measurement and calculate the lie.

Okay, now it makes sense…and yes, the clubshaft is secured in the machine just like that pictures.