Does anyone happen to know what wedges Hogan used during his playing career? I have a number of books on Hogan, but it has been difficult to glean his club selections from various photographic sources. I’d be interested to learn about his selections during his time with both Macgregor and his own marque. Thanks!

I’m not sure about Hogan, but I can tell you Trevino used a very old punch dot faced wedge for a long time. He said he liked it better because the spin didn’t change when you laid the face open.

I am not sure to be honest. Being new to serious golf as well as vintage gear specific models especially of wedges aren’t my forte. Pretty sure it was in the piece about '71 at Merion that they aired before the US Open this year. Good watch by the way

Aha! A Wilson Helen Hicks National Champion Punch Dot Face sand wedge circa 1940’s. Rumour has it he called it Miss Helen. At one point he used a Wilson R90 set at 59 degrees that he said was like cheating out of the sand.

Good find! Maybe Trevino was partially responsible the resurgence in the popularity of the r90 with pros in the mid-seventies? Nicklaus had one in his bag at one point, as well, I believe.

He said he liked it better because the spin didn’t change when you laid the face open.

After a bit more digging it seems that wedge could have been from the thirties as well. Lee said one time he left it in the parking lot and someone leaned it against the wall and left it there. Jack was strolling by and found it there so he delivered it to Lee the next day on the range. He figured it was too ugly for someone to steal. I still can’t find the video or quote but I distinctly remember him talking about the spin consistency. Just like placing t-56 in his first US Open using a Macgregor 11 iron that was ‘sharp enough to cut a steak’. Haha, would be a lot of fun to play a round with that man.

I love the 11-iron. I suppose it is essentially a gap wedge, but the m85 11-iron is my favorite club in the bag. Like Lee said, they have almost no bounce.

I believe Hogan used an R20 during the 40’s as you say. You can see what looks like a Wilson wedge in the few bag / club shots taken.

There’s also this closeup of his SW taken pre-WWII. Looks like a ‘slightly’ later R20 with grooves as has the same hosel markings / black plastic ring. 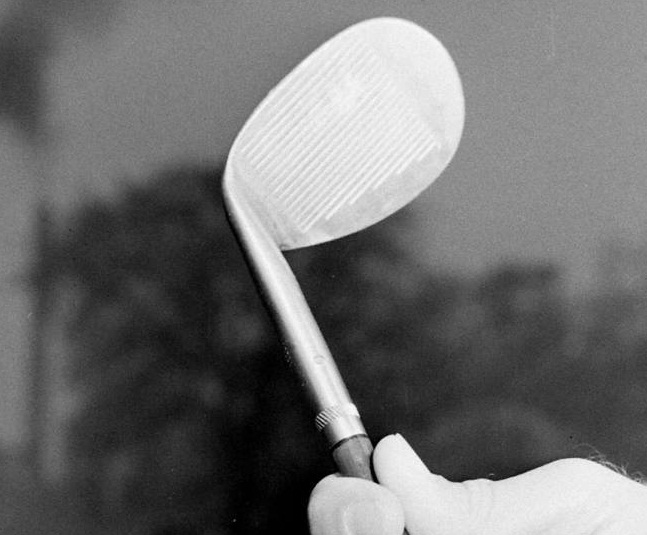 Cool find. Where did you come across that photo? It appears to be an R90, which was the R20 with scoring lines vs. dot face. I think that also looks like a pyratone shaft, which would make sense given that was pre-WWII and the chrome shafted R90s were all post-WWII in the late-40’s, early-50’s.

The photos were taken by George Strock for Life Magazine, I believe around 1939. If you ‘google image’ the two names together, some of the pics will come up. There are well over 100 pictures from the shoot and not all appear in the search. Basically they show Mr Hogan playing various lies, including a water shot and lefty with blade upside down, among several others. He looks very young so early career for sure.

I’ve studied the sand iron carefully in the various photos and it matches my R20 in every detail (including brown pyrotone shaft and hosel marks). There were some early R20’s but with scored faces - seriously heavy chunks of metal !