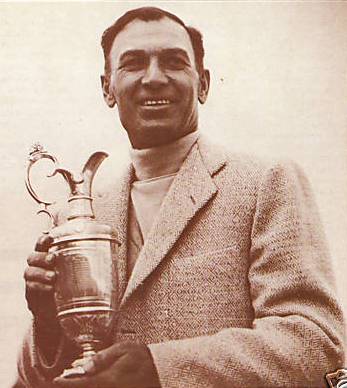 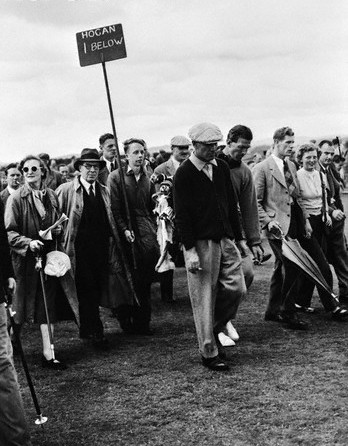 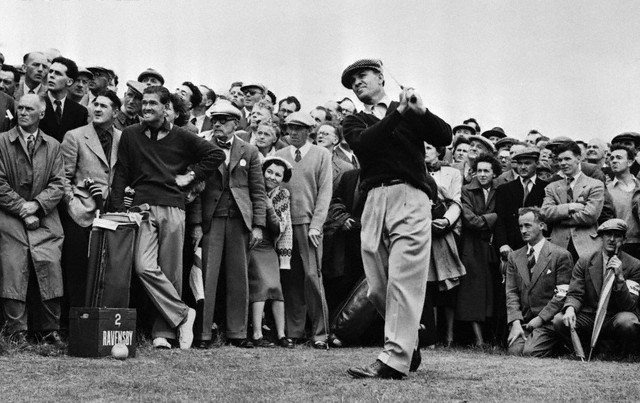 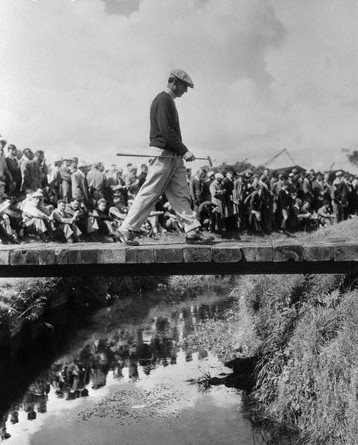 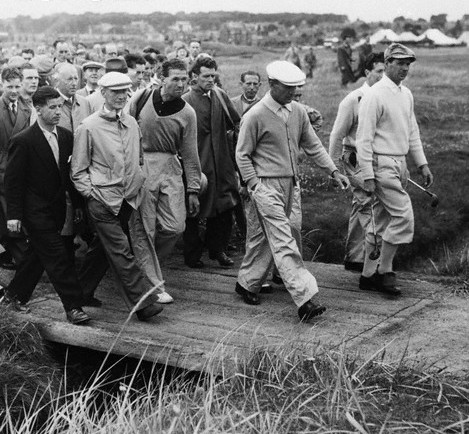 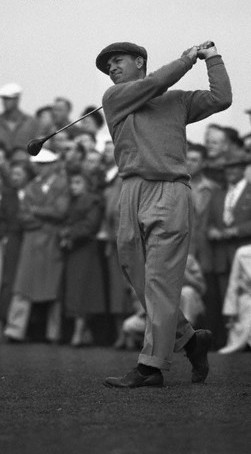 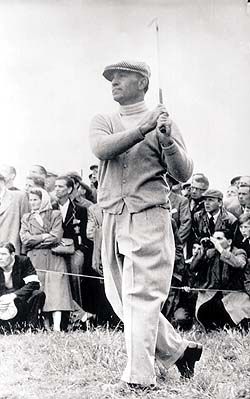 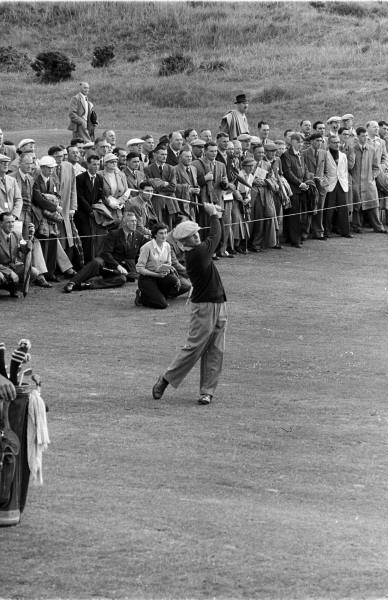 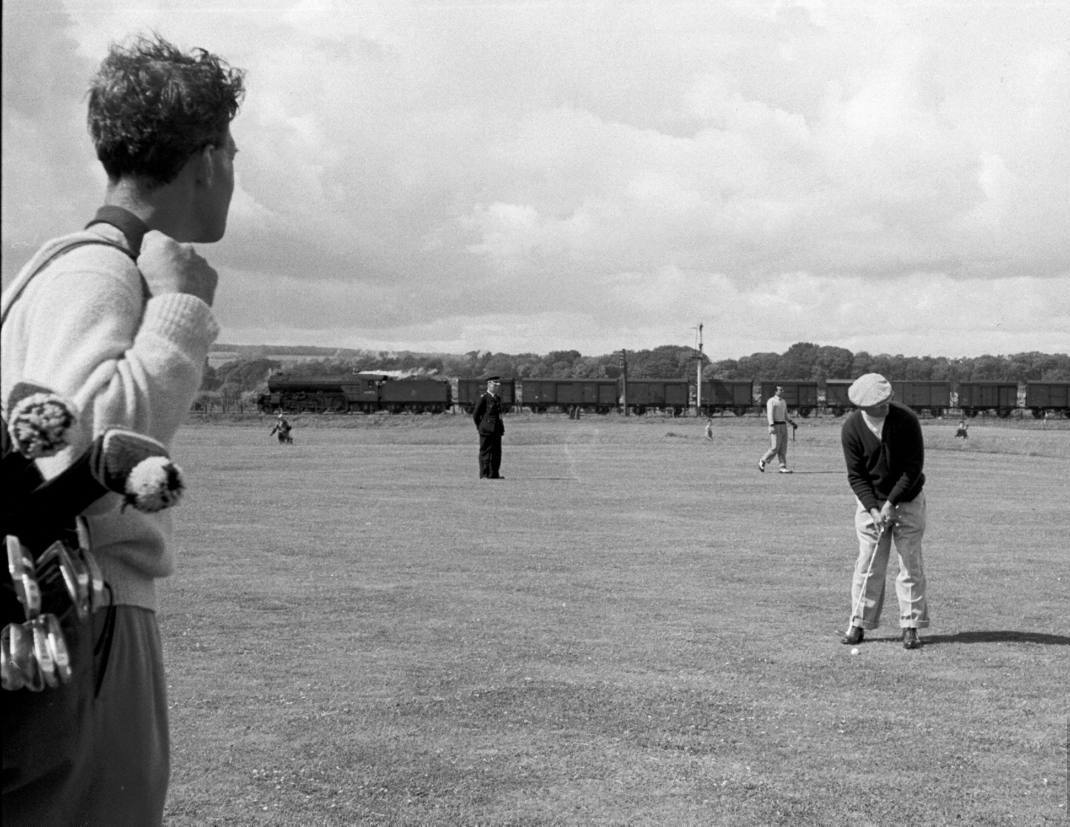 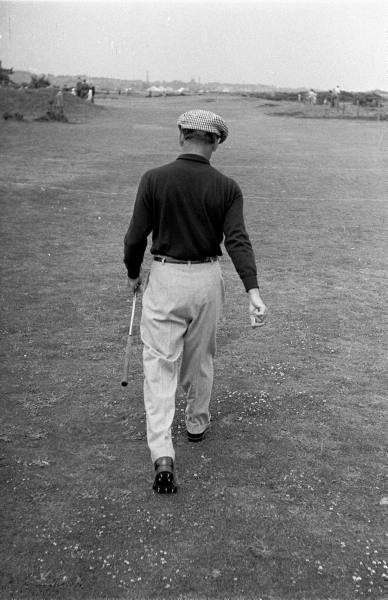 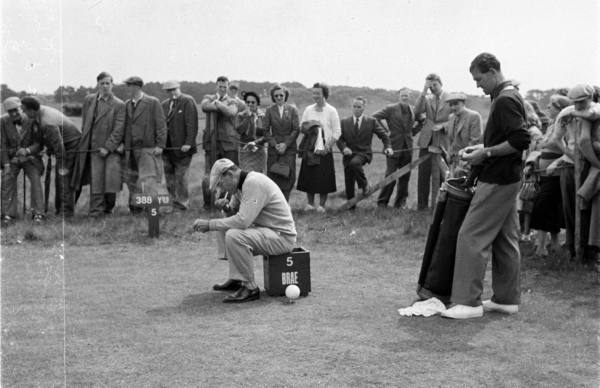 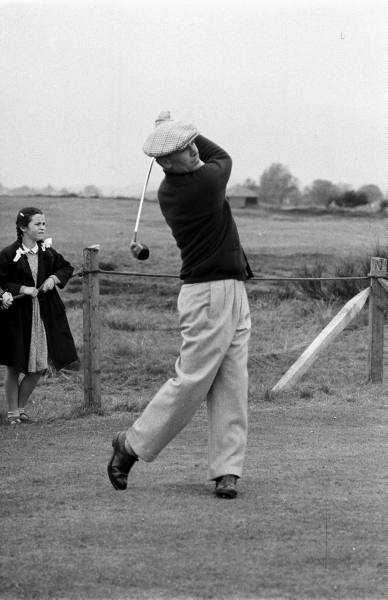 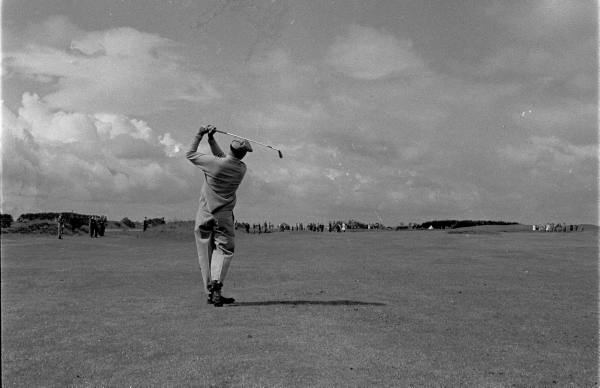 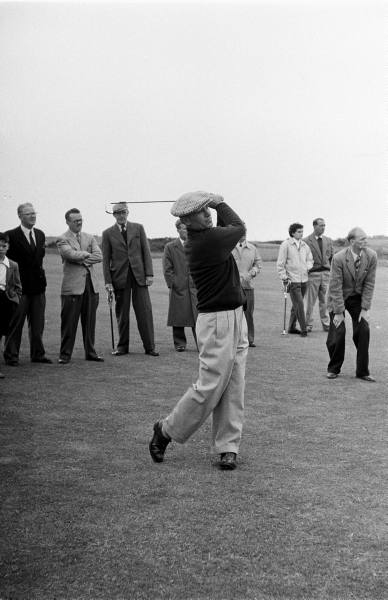 Here’s some nice newsreel of that 1953 Open

The weather was cold and windy and there was occasional hail as the players trudged Carnoustie in the first round. In practice rounds Hogan had never hit more than a light eight iron second shot on the first hole. In the tournament’s first round because of the wind at his face, he nailed a driver and two iron as hard as he could and did not reach the green.
Hogan felt alright about his play in scoring a 73 in the first round because of the wind and the bounce and run shots he had to make. He was not satisfied with his putting however, and he was worried about his energy. He had been losing weight since February and had lost weight through the two weeks of practice at Carnoustie. The meal rations were small and the food, in his words, “awful”, and he tried to keep his strength bu eating a great deal of fruit.
Those familiar with Hogan’s hard to please eating habits could scarcely believe his getting along on lamb chops or mutton and the same three vegetables every day for three weeks and being served roast beef as thin as boiled ham only twice in that period. He would not touch the kidney pie.
The 73 left Hogan three strokes back of Stranahan going into the second round, where Hogan once again could bot drop his putts although he played well and scored a 71 for a thirty six hole total of 144. This was two strokes back of the co leaders, Rees with 72-70 and Brown with 71-71. DeVincenzo was at 143 and Hogan thought the powerful Argentinian’s tremendous distance off the tee might have everyone else playing for second. DeVincenzo might have run away with the tournament if he could have avoided trouble. Stranahan and Peter Thomson were at 144 with Hogan. Locke and Faulkner at 145.
Hogan’s caddy was Cecil Timms, who had been recommended by two United States amateurs, Harvie Ward and Dick Chapman. Timms was a good caddy, treated Hogan’s clubs like the crown jewels, kept his shoes shined, but may have made his greatest contribution by relieving some of the tension that Hogan naturally was experiencing.
Timmy, as he was called, was so nervous himself that Hogan found it necessary repeatedly to stop and talk to him and calm down his caddy. “For goodness sake just stand still and shut up”, Hogan told timms. “Aye; yes sir” was Timms repsonse. However on long putts the caddy would hold his head down between his arms and refuse to look. On other putts he might growl fiercely at the ball, make faces, jerk his arms wildly, and adapt various postures of 'body English". Hogan never asked a caddy what club to use but if he picked a five iron and the ball was short of the green and he commented that he should have taken more club, Timms would say, “I had me hand on the four iron, I did”.
Hogan was walking well ahead of Timms once when a rain squall hit and Ben stopped, waiting for his caddy to hurry up with the umbrella. When Hogan looked back, Timms was busy putting on his rain suit and by the time he came up with the umbrella Ben was soaking wet.
Hogan carried fruit drops in his bag each day to eat for energy. He doled out some to Timmy and said they were for him but that he would need to eat the rest. On the second round Timmy ate his share and Hogan’s too !! Ben bought some more and told his caddy to leave them alone. But soon they were all gone, and Hogan lectured the caddy sternly that he must leave the next jar of fruit drops alone. “But Mr Hogan”, Timms said, “I could eat them all day they’re so good”.
Hogan susceptible as usual to inclement weather, had a touch of the flu by friday morning and took a shot of penicillin before going out to Carnoustie for the final thirty six holes. he had other medicine but did not take it for fear of getting an upset stomach.
Carnoustie was crowded with more than twenty thousand people who had come from all over Scotland to watch this legendary golfer make his run at their championship.And back in the United States, not since D-day of 1944 had the public been so unanimously interested in an invasion of foreign soil. Golfers, golf fans, and people who did not know a driver from a putter were following Hogan’s progress. On the final day they telephoned newspapers and radio stations by the hundreds and thousands. Radios were turned on in homes, automobiles, drugstores, barbershops- everywhere- to catch the announcers who were giving almost hole by hole accounts of Hogan’s play.

“All in all, it was hard to imagine a victory which could have been more completely victorious”, golf historian Herbert Warren Wind wrote. “Perhaps that is why it had scarcely been achieved when it began to have a ring of a legend to it… Since he had never entered a British open before and since it was probable that he would never do so again, what had happened- his arrival in a strange land, the perfect completion of the task he had set himself, his succinct departure- seemed to be sealed off from all other events, suspended as it were, in a separate and somehow unreal land of it’s own, so that if it were not known for a fact that there had been a 1953 British Open on that remote stretch of duneland in Forfarshire, you might have thought that the whole story was the concoction of a garret-bound author of inspiration books for children who had dreamed up a golfing hero and a golfing tale which he hoped might catch on as had the exploits of Frank and Dick Merriwell in the days before golf was considered the proper vehicle for the dreams of glory of the red-blooded American boy”
Hogan who came to believe the tee shot is the most important in golf, was in the rough only ONE time in 108 holes, and that was in a qualifying round. He completely avoided the Barry Burn, a creek that runs around and across portions of the Carnoustie course before flowing into Carnoustie Bay. His was a superb example of preparation and execution.
Hogan did not putt really well the entire tournament and left the ball short of the hole frequently the first three rounds. And throughout the seventy two holes he never bounced an approach shot ‘stiff’ to the pin. He maneuvered the ball expertly, however, and his organization and management more than compensated for his putting problems.
The British Open was Hogan’s ninth Major championship and his sixth since his 1949 automobile accident. His two PGA titles were matchplay but in the four US Opens, two Masters and his British Open victories Hogan averaged 281.3 strokes per seventy two holes.
Hogan was not sanctimonious, nor a hypocrite, but he said after the British Open." I don’t think anybody does anything unless the Lord’s with them. I think it’s fate, and supposed to be, that I won these tournaments; otherwise, I wouldn’t have won them. All of these victories required more guidance than one human being can give another and I’ve been fortunate enough to receive that guidance. I think the Lord has let me win these tournaments for a purpose. I hope that purpose is to give courage to those people who are sick or injured and broken in body as I once was."
The US Open triumph at Merion in 1950 would always be prized the most by Hogan because it proved to him that despite the accident and the lasting damage to his legs he could still play major championship golf and win. But for sheer joy of triumph, the British Open ranked first.
“The British Open gave me my greatest pleasure. Certainly the others were pleasurable, but none of them gave me the feeling, the desire to perform, that gripped me in Scotland”
There were more years and more tournaments and more challenges ahead, but Hogan’s conquest at Carnoustie would stand through the years as the grand climax to the implausible career of an improbable champion.

Thanks for that, a great read.