I would love to go thru his warehouse one day. Its like the ultimate Man Cave! Like Charlie and the Chocolate Factory…haha

Anyways, just sharing if you wanna take a peep!

Link to video of behind the scenes of his warehouse
http://bit.ly/YjKC0h 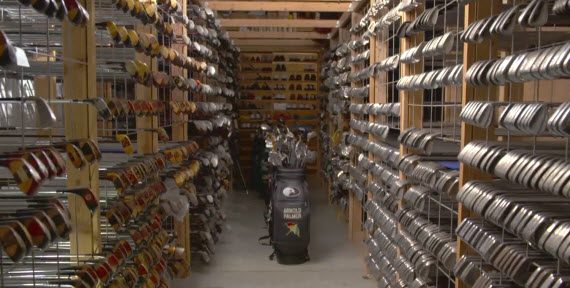 Palmer mentioned that he missed persimmon, and there are things he could do with persimmon that he couldn’t do with the metal woods. Interesting interview for sure.

No long putters in Arnie’s warehouse.

ORLANDO, Fla. (AP) – Arnold Palmer is stating his case to ban the method used for long putters. And he says golf would be making a mistake to have two sets of rules.

In a wide-ranging press conference Wednesday, Palmer referred to anchoring the club against the body as a ‘‘contraption.’’ He says his hope is that golf would continue to be unified under one set of rules, and those rules would ban a long putter that is ‘‘hooked’’ to the body.

The PGA Tour and PGA of America are against the proposed rule that would outlaw anchored strokes. Golf’s ruling bodies are expected to announce soon whether they will go ahead with it.

Palmer also says he was surprised Rory McIlroy is not playing the Arnold Palmer Invitational at Bay Hill.