Arnold Palmer and The Pole

Seems now this is a lost secret of the golden age of ball strikers.

Notice how thick the shaft is down near the neck, and the big chuck on lead on the back of his driver.
A heavy and super stiff pole shaft to support.

I switched to a pole shafted driver last year and haven’t looked back.
Not everyone believed in iron and driver shafts needing to be different.
Palmer, Hogan, Floyd, Watkins all hit Poles as confirmed by Mr Chalmers whom I know made shafts for all of
the prior mentioned. I know Moe had a Pole in his driver also back in the 1980’s and prior.

Mike and I have put together a couple Pole drivers with Gamma Fire inserts coming here soon.
The won’t be cheap, but they will be good! Great stuff for the better ABSers.

Who makes these Pole shafts?

Yes, while Donna Reed cooks stew in the kitchen.

And yes RR, you are. Pretty sure I was being conceived right around the New Year of '86…

Oddly enough, what you need to make one of these things is a guitar amp and a set of girls dumbbells.

Oddly enough, what you need to make one of these things is a guitar amp and a set of girls dumbbells.

Actually any kind of speaker cabinet will do…If it’s an amp though, it’d better be tube!

So the thicker shaft is the result of sliding a shaft over the lower thinner part. Hmmmm. Where do the lady weights come in NRG?

Although given what I think I know about tube amps, that doesnt make any sense

Not sure about the big bertha driver though.

No one makes Pole shafts in commercial quantity.
We have been making them in Mike’s shop, and have put together a few prototypes… and yes, with Gamma Fire inserts also.
This is how drivers should be made. A relatively compact head with center weight… not perimeter weight. Wood gives better audio feedback for both good and bad strikes so your brain can properly process and guide one toward improvement. Flat lie angles will help one hit it straighter… because now the player can really drive it hard minimizing the left factor. But the shaft is the real key. The Poles look and feel stiff… but that is only relative to driver shafts in general. If you believe that we need a looser shaft in our woods for extra distance, then the Pole is not going to be the right shaft for you. But if you think it through a bit… with a hitters vision, then there is no reason to have different shafts between your irons and woods.

If you look at the ratios and progression from 2 iron, 1 iron, then into 3 wood and driver, we have this sudden 3 or 4 inch jump in shaft length. So actually, even if you just stick a 2 iron shaft in a driver and extend it… it’s not enough because the shaft actually needs to be significantly stiffer to maintain the same deflection rate.

Deflection rate is the curvature of the shaft or it’s lateral distortion when you put a load or weight on it. I use an 8 pound weight to test my shafts. I keep the overall deadweight of my clubs in tight progression. I don’t believe in going from 14 or 15 ounce long iron into a 10 or 11 ounce driver.

A good hitter is not going to have as much trouble moving a heavier club around their body if they are swinging from their core as the greats did. Today’s modern swings are all a hand flip through impact. The clubs are too light and it’s all timing the flick. The great hitters are accelerating the club from their core through impact. Watch the modern pros stall their rotation through impact. Their torso, hips… it’s all stalled and they try to use hand speed the keep things moving with a lightweight club. So while this is all great for generating velocity, the mass is lacking, and so is the feel. These guys play and grind balls all the time… and still struggle to drive the ball straight. It’s not great striking. The US Open at Merion this year showed what happens to them on real golf test.

The Pole shafts are the correct hitter’s shaft for those who have good golf swings. Nothing has to change… same swing from wedge to driver. The extra 5 or so yards I might lose from such a stiff shaft is well worth the accuracy gains. And if I am truly holding shaft flex into impact, then I would argue there is no loss at all because the pressure transfered into the golf ball will be much more efficient when the shaft itself is fully loaded up. At that point, the forces of impact start to be resisted by the body itself. This is the great stuff.

There is a good reason many of the great hitters used the Pole shafts. It’s lost technology and a lost understanding of deflection theory vs frequency matching. Shafts don’t oscillate prior to impact. They are not guitar strings.

We’ll have a couple of them on lagbay for sale soon. Mike has made two of them. It’s a ton of work to make these, and just finding Gamma Fire inserts these days is a chore in and of itself. But I have received enough emails inquiring about these so we are going to have a few rare ones available soon.

My first attempt at making a pole shaft. Shaft is almost as thick as the hosel. 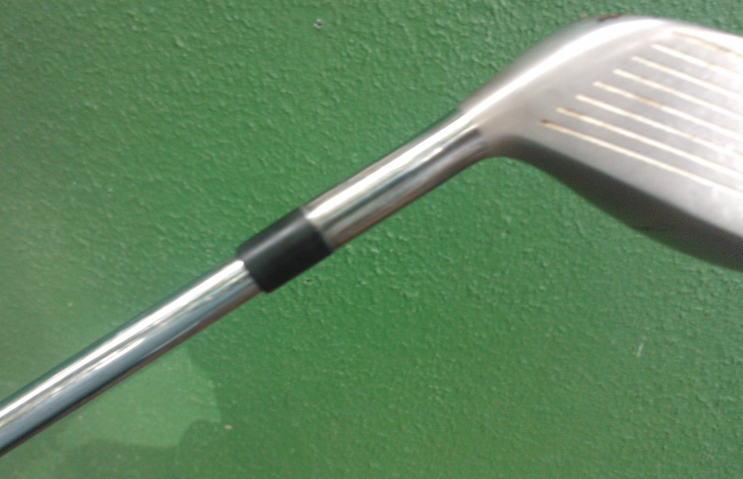 Can someone explain the process of how a pole shaft is constructed?

Hey all I thought i would throw in my opinion on the pole shaft.

I recently had lag put a pole shaft in my macgregor m85 2 wood which I use off the deck and off the tee.

So far after about a month of play and close to 10 rounds I have found that it is incredibly accurate. It is heavily fade biased. Prior to the switch I could easily move the ball from right to left. Now.,I have to hammer it to keep it straight. I can turn it if I want to but it is very very very difficult. Distance hasnt suffered much if at all.

I played a 7200 yard course a couple days ago. 2 wood and dynapowers in hand. Only had to really reach for extra distance on 2 holes.

I highly recommend the pole shaft.

A hook swing is a powerful move… and dangerous because as we know, when then hit the ground they tend to run out also into trouble left. A shot from the left trees takes another hook usually to get out… and this shot is not likely to hold a green, and if trees are in the way, it is much harder to hit a high hook or draw than it is to hit a high fade to escape. While not always true, it is predominately true.

With flat lie angles, removing offset, and stiff shafts, we can learn the powerful hook swing, but contain it’s dangerous side by setting up our gear to counter.

The concept of the pole is really nothing more than setting up the deflection rate of the shaft to match to your irons. This way you can use the same essential swing from wedge to driver.