Ed Furgol as a young boy of 12 broke his left arm falling from a playground trapeze. The arm was never set properly and even after 2 desperate operations it would never be normal. The elbow set into rigidity and the left arm would be 6 inches shorter than his right arm. Atrophy set in also in the extensor muscles from the elbow to the shoulder so Furgol would end up going through life with that area withered- just bone weakly covered with flesh and basically crippled.
What he did by taking up golf was downright amazing and he won 6 PGA titles including the 1954 United States Open 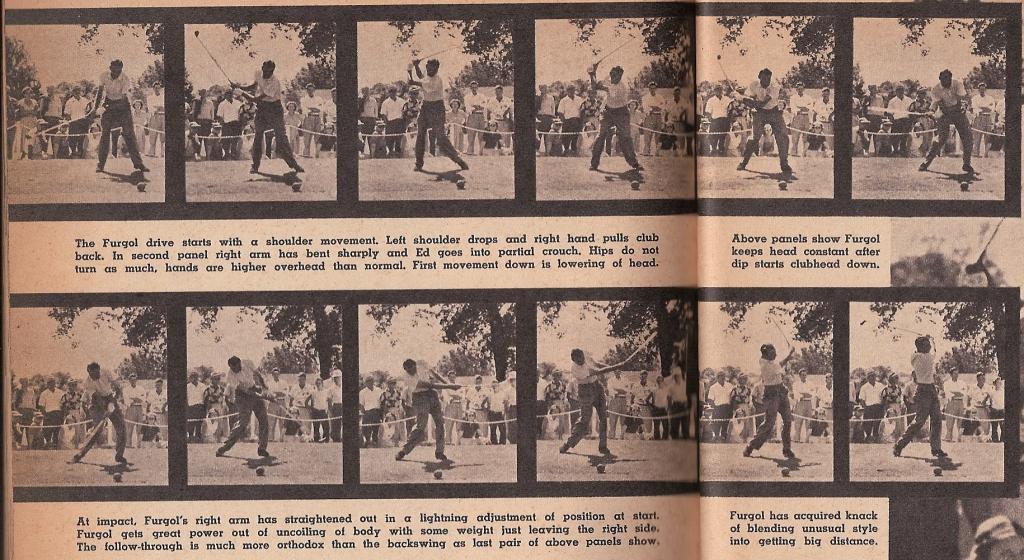 Started playing golf at his local course in melbourne, Australia and when he was just 14 took up an apprenticeship at a course under the pro George Naismith. After months of bugging Naismith to come watch him hit some balls Graham finally got his wish. Naismith watched him hit a few balls and then handed him a right handed 5 iron and told him to swing…Graham replied I can’t…“I am left handed handed”… Naismith said “well from now on you are right handed and I never want to see you ever again hit a shot left handed”…
Not a bad story being made to not only change your swing but change from left handed to right handed when you were 15 years old and had already been playing golf to a decent level …
Lots of CF in this swing but he had all the shots and determination to succeed.
Graham of course went on to become one of Australia’s finest golfers ever winning the 1977 Australian Open, the 1979 USPGA and the 1981 United States Open hitting all 18 greens in regulation in a memorable final round of 67 at Merion GC 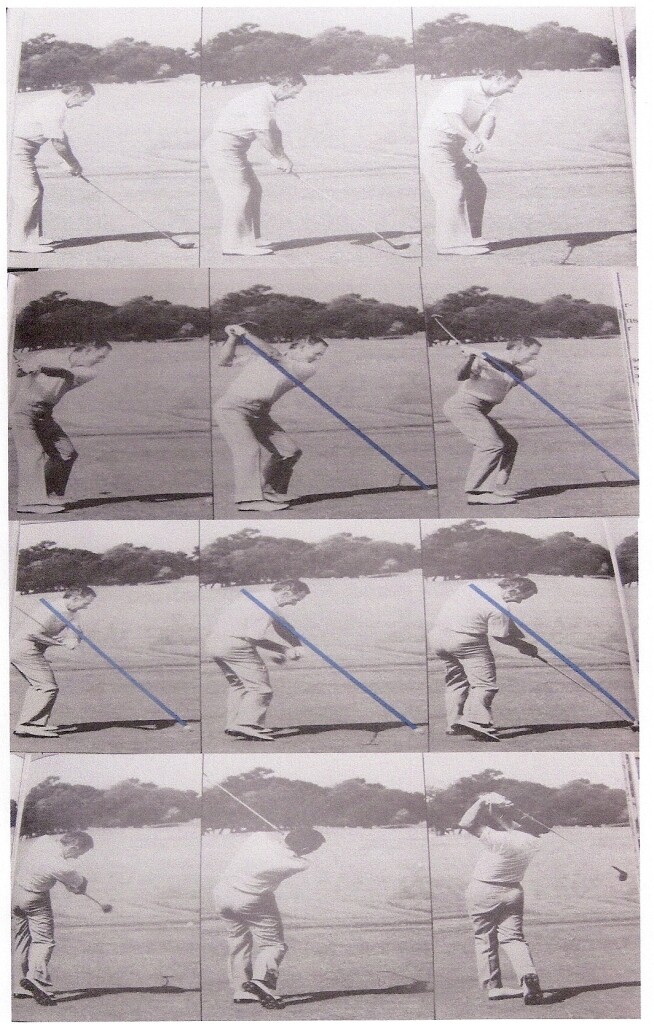 What a great thread to start! Thanks…

let’s see here… Furgol, holding shaft flex into impact, and then driving into a great PV5 with stellar post impact pivot thrust.
The only I would change would be the size of his trophy case…

Calvin Peete didn’t learn to play golf until he was 23 years of age !!! yet between 1979 and 1986 he won 13 times on the PGA Tour including The Players Championship.
Peete broke his arm when he was 12 years old and it wasn’t set properly. He says … “The broken arm never bothered me…I still had a good swing…all that was missing was extension which didn’t allow me to hit the ball long”… Peete led the driving accuracy stats for an amazing 10 years straight!! 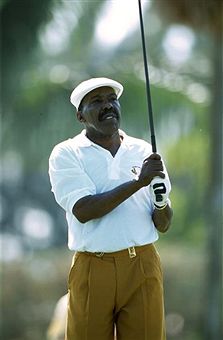 You beat me to it!

who can find some great photo sequences of Calvin?

Lag,
It’s going to take some digging to get some good pics of Peete, but here’s a start…impact- you can notice the bent left arm at impact as a result of the childhood accident where he broke it Here’s a quick snippet of Peete talking about the swing

An article from a golf magazine in Michigan

Here’s another real interesting video about his battle with tourette syndrome, which I did not know about

The swings in this clip have pv5 intentions all over them!

I was able to grab a few screen shots of Calvin Peete from the video links. The resolution is low though. 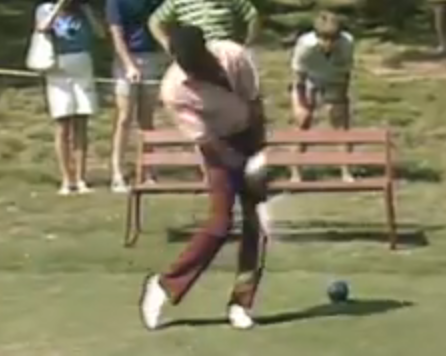 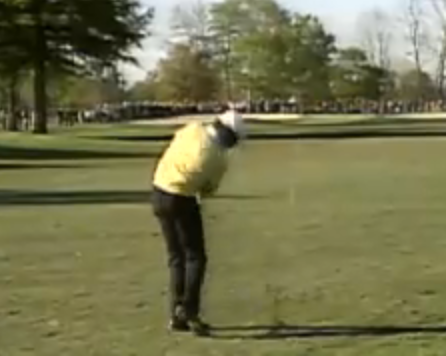 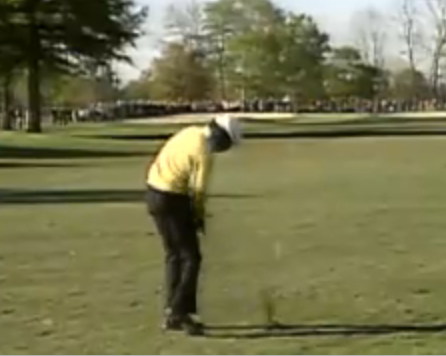 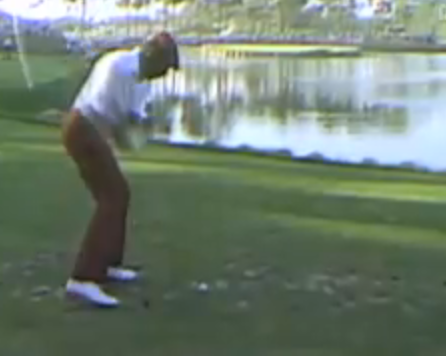 [b] My wife, Gayle, knew I wanted to take up “real golf,” so for Christmas she bought me a set of Jack Nicklaus irons and woods. I didn’t like them because they had leather grips–the driver I used at the range had a rubber grip. So I exchanged the clubs for a set of aluminum-shafted Doug Sanders models. I then joined Pinetree Country Club, which offered inexpensive junior memberships, and played my first round of golf. Watching golf on TV and observing other players, I learned, bit by bit. When the club lost its assistant, the head pro, Bert Seagraves, hired me for $67 a week. I’d show up every day at 5:30 a.m. and play with the superintendent before opening the club at 7:30. Within nine months I broke 70, and within two years I was one of the better players in the area. I didn’t know how good I was, but apparently the members did. They put up some money and sent me, no strings attached, to Florida to play the mini-tours.

Bert gave me a copy of Ben Hogan’s Five Lessons and said, “If you want to learn how to play the game, this is it.” I studied it to death, and it did a lot for me. The amazing thing about the book is the section on swing plane. Instructors are still talking about it. To me, swing plane comes down to something very simple that Davis Love Jr. told me early on: “If you stand upright, don’t swing flat, and if you set up flat, don’t swing upright.” That’s all you need to know about swing plane. Just make sure your plane matches well with the angle of your upper body at address.

There are very few absolute truths about the golf swing. In fact, there are only two I know of. The first is, “Shots don’t lie.” That’s very important when you’re learning the game, because the golf ball tells you exactly what’s happening through impact, and you start fixing it from there. The second is, “Keep the club moving down the line, with as much speed as possible.” I built my entire game around those two keys, and I recommend them to everybody. If you focus on those keys when you’re learning to swing the club, you’re going to be a good player. Simple as that.[/b]

The story of Ben Hogan surely cannot be left out from any talk about amazing golf stories.
On February 2 1949 after a playoff loss to Jimmy Demerat in Phoenix and also 2 victories , Ben Hogan was the leading money winner after the first month of the new season. He and his wife started driving back to Texas for a break before the next string of events.
In dense fog a Greyhound bus after trailing a freight truck for several miles decided to overtake as he was falling behind schedule. Ben Hogan driving his cadillac suddenly saw 4 headlights facing him through the fog and without any time to react dived across the seat to shield his wife. The steering wheel crashed through the front seat colliding with Hogan’s legs. He would have been dead except for his instinct to protect his wife from the upcoming impact.
Reports that Hogan died drifted around the country. But he had spirit and determination to fight for his life. Doctors eventually told him he would possibly never walk again and certainly would never play competitive golf again.
Hogan did every physical action possible to regain strength in his legs and his frail body and on December 10, 10 months after the accident, actually played 18 holes, albeit in a golf cart, at Colonial CC in Fort Worth. A week later he walked and played a full 18 holes and was so sapped of energy he went home and went immediately to bed.
He decided he would attempt a comeback at tournament golf at The Los Angeles Open the next month at one of his favorite courses, Riviera CC. The golfing world was abuzz. How could a man who almost died less than a year earlier actually compete at a PGA event with frail body and little practice.
Not to be swayed Hogan opened with a 73. He then shot a 69 in round 2 and made believers out of everyone. Rain washed out the 3rd round which may have been a blessing for Hogan as it gave him a full days rest to recover from his arduous task and walking around the course in his frail state. Hogan shot another 69 in round 3 to be in second place behind Jerry Barber. Amazingly he shot his 3rd successive 69 in the final round and looked like the winner with a total score of 280.
Alas Sam Snead birdied the 17th and the 18th holes to tie Hogan and send the event to an 18 hole playoff …Unbelievably the play off did not take place for another week because of rain and it was rescheduled the following week after the next event, The Crosby !!!
Snead would come out the victor shooting a 72 to Hogan’s 76 but a remarkable event in golf had occurred and Hogan would complete his comeback just a few months later with a win in the toughest event of them all…The United States Open
Below:
Snead and Hogan shake hands before the playoff at Riviera
Hogan driving from the 1st tee
Putting on the 18th green at Riviera 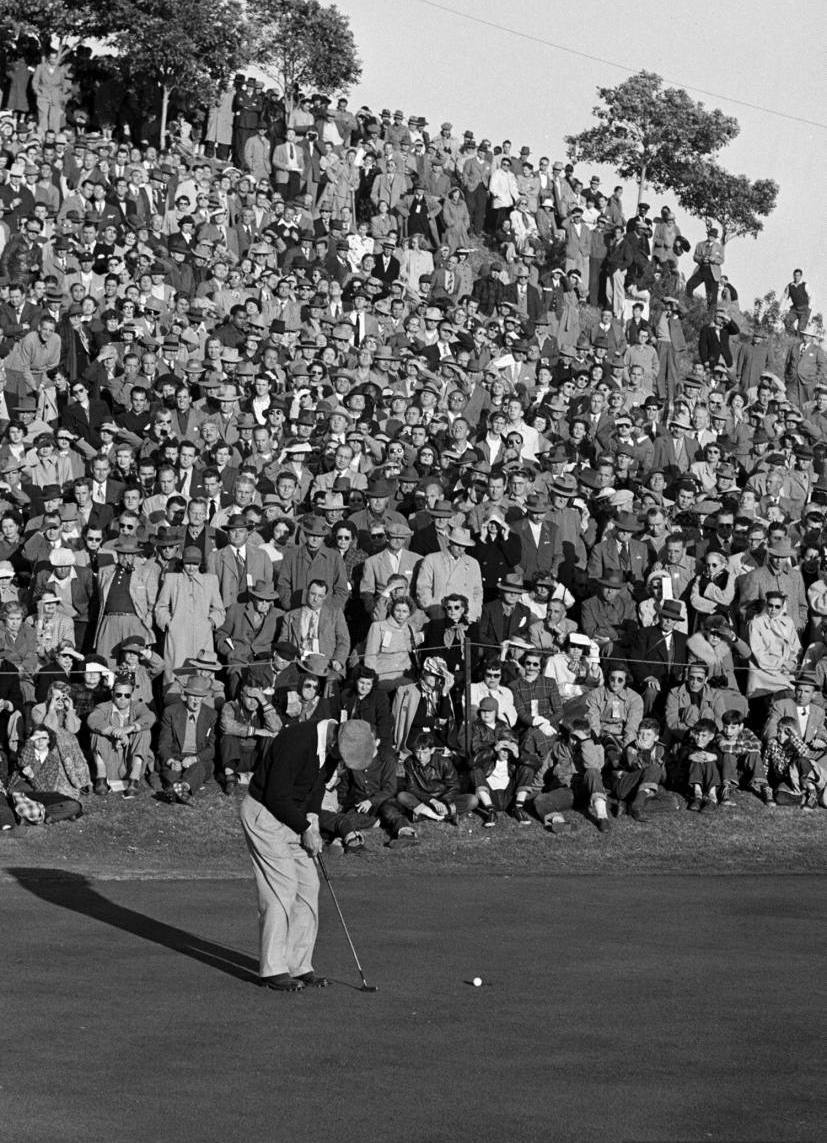 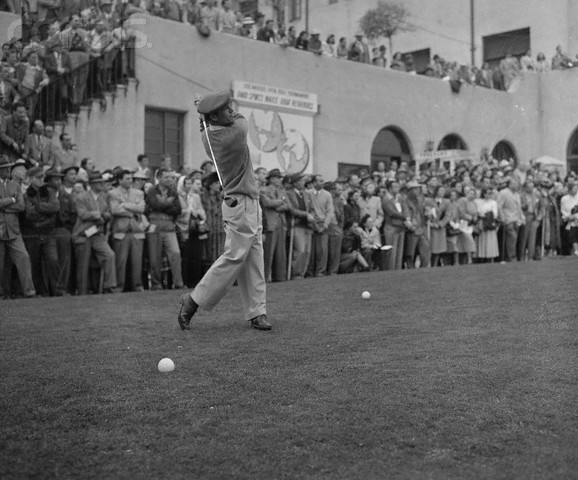 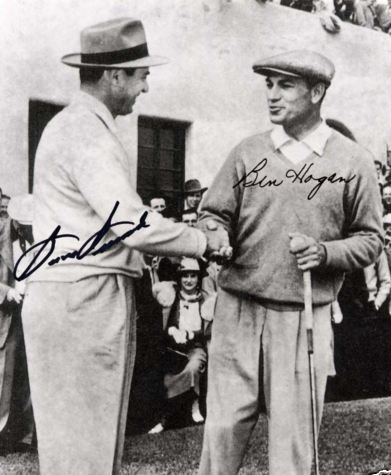 For any of you enjoying these great stories - there is a book out there called “Talking on Tour: The Best Anecdotes from Golf’s Master Story” - its basically almost 500 pages of short stories and anecdotes - but it felt like reading a 50 page book - it was that amazing! And for any golf teacher a MUST read imo - just to lighten up the mood when your overambitous student has the shanks or fatsies again and is going to blow