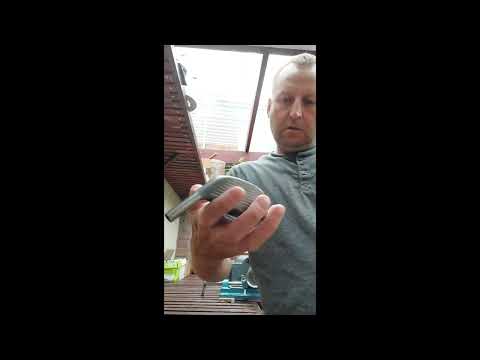 For those who don’t mind trashing a few clubs.

Awesome. I kinda miss those days digging into and cranking onto clubs and whatnot.

Ed always lathed wood shaft extenders for us, and I was nicely surprised to see how you did that as I have never thought about doing it that way before, pretty clever. Wish Ed were around so I could show him.

Have you thought about maybe crimping the insert instead of epoxy. My question, is not based on experience because I never did it that way

If you ever franchise I might come out of retirement. You do good work, no fancy tools.

How do you crimp them Rat??

I am looking for US based apprentice if you are interested…

I can’t even find a golf shaft crimp tool listed anymore, they were like little pliers with a little nub on it that made a little dimple on the shaft to secure it against the hosel inside better- it put the shaft a smidge out of round so it became a mechanical lock inside the hosel- and it may have worked locking the extender against the inside of the regular shaft, but not sure, maybe epoxy would still be needed. I checked Golfworks site and they don’t even sell them anymore. The times are a changing I guess.

If I find a picture of one I’ll post it but no luck so far. Maybe Lag’s friend Mike has one to see, and for insight.

Only kidding about the franchise…lol, I enjoy retirement, playing and ranging, or what some call lounging.

Usually hard to get out even with no epoxy. So the epoxy probably isn’t really needed anyway.

NRG, new poster here. In previous posts about heat bending on this forum, you mentioned that you could do this with bore-through drivers and woods including the 975D you mentioned in the video, how? I have a 905S that I desperately want to bend to 50* lie angle but I have no idea how to bend the hosel and the internal bore at the same time so the shaft can still go straight in.

Just the same method. You are only bending the hosel section, I epoxy in a dummy piece of shaft to fill the bore thru hole.

Don’t think you can do the 905S. The head isn’t one continuous piece of metal, the hosel is a sleeve which will just melt.

So just less than an inch of old shaft epoxied in and graphite shaft pin to fill the hole in the middle of the shaft, then you file/sand it flush. Then it you can pour in plenty of epoxy mixed with lead powder down the hole, can usually get 10gm in one of these as more space than the fairway woods I did.

That’s a bummer about the 905S, that’s my favorite head shape that was available in LH. I suppose I can just switch to Taylormade heads for bending non-bore heads, will the post-R510 TP heads work?

It seems like the most recent version from Taylormade with a long enough hosel in LH is the Superfast 2.0 but its look at address is ugly so I’d rather go all the way back to the R7 series before they made the switch to adjustable hosels in R9. Can they be bent?

I tried to bend a Callaway Diablo Octane Tour 3-wood a couple years back but instead of the hosel being bent flatter the bore of the hosel went from a circular O to an oval, I guess Callaway cast metals are just too tough to bend.

I’m not sure to be honest, I don’t know all heads. I just know the 905S cause I used to use one and found out the hard way when the alloy hosel/sleeve melted.

The key is that the head is just one piece of metal.

Can stick a drill bit inside the hosel (tight fit) to stop if from going oval, but this increases the chance of snapping, again, found out the hard way.

I’ve decided to get a TM R510 TP but I have zero experience with heat bending metal woods so is it possible to ship it to you to bend? It seems to be one uniform piece of metal and it’s not a bore-through design either.

I play Arias zero offset irons and although they are not blades, I still love the look of zero offset at address and I was able to bend them flat enough so that the center of the sole sits even at address in an ideal setup.

But I’ve had no luck in finding flat enough drivers and woods to have them sit even at address and the max they can be bent is 2 degrees without heat, 4 with Wishon drivers but I haven’t been able to find a LH one for sale. I don’t want to change the face angle either, I prefer square with all clubs.

Where do you live? I am in the UK.

Might be cheaper for me to try and pick up a club over here.

I live in the US unfortunately but I can find a driver from eBay based in UK and buy it and ship it to you to bend, what’s the newest model you have successfully bent?

I looked further into the modern driver testing process for legality, they (USGA/R&A) started testing and limiting COR in 1998 then switched to a different measurement called CT in 2004 so it seems any driver from 2004 will have the same rebound as today’s driver albeit less forgiving on mishits.