Finallly got all the stuff i need to work in earnest on specing’ irons!..
Besides the obvious capital outlay on tools… the total material cost for this set of Dynas’ 2thru SW was $125.00…

snagging pullouts and heads from ebay and ordering mint grips direct,helps, not to mention the cool ferrules fron House Of Forged. !!
All with help from you guys,learned to: step drill the hosels, add and peen lead where the rubber plug used to go,
reshaft w/- x100’s and flattened to spec… definitely a labor of love! Where else on earth can you have this much fun!!
Hittin them this weekend,can’t wait! 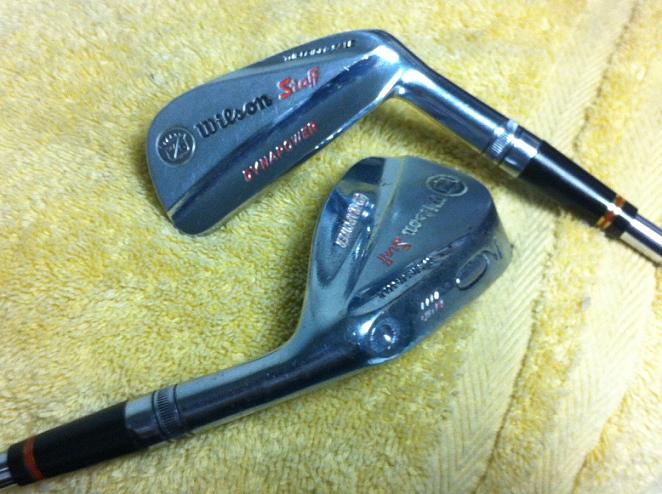 Looks good to me Dale

Are you liking your bending machine?

Thanks Mashie,
Hit a few balls with them, they really feel great, head size just a smidge smaller than my 71’ button backs and the soles appear to be flatter , I like my divots better already !
The Maltby bending machine was a bit of a disappointment, no loft lie gauges built into the machine, and there is some weird level gizmo that attaches to the shaft, appears that it was supposed to be used with magnetic protractors, but you still would have to take the club out of the vise to measure it…anyways good ole’ machinist protractor and a carpenters level used to check the angles when done… I guess I can chock this up as my first ebay mis- fire,

but it works for now…

thanks for asking!
take care!
Dale

Turfriders have the easiest to hit long irons I’ve ever found. With very compact blades and shallow faces, they’re a little intimidating at first but turn out to be very solid with a nice high (for long irons) trajectory. They have a lot of mass behind the sweet spot with those thick soles that also lend a bit of reassurance. In fact, I don’t think you have to squint very hard to see the genesis of the modern hybrid iron.

On the other hand, I find the feedback from the scoring irons to be a little vague. Almost the entire face gives off a solid feel, which is great when you’re swinging well but makes it tough to self-diagnose when you’re not. I much prefer Hogans for the mid- and short-irons.

If I could find a set that combined the Turfriders long iron design with more responsive mid- and short-irons I’d snap them up in a heartbeat. Does anyone know if Wilson made such a set?

I’ve always been a fan of the '76 Staffs - sometimes called the mini-bullets. Lots of mass and I’ve found them easy to hit.

The Turfrider 1 iron has been a staple in my bag for years now ever since I first hit it. Best 1 iron I have ever struck.