It looks like this year’s set up will give Lag something to look forward to: Long irons.

The players have been saying all week that they have been pulling out long irons like never before. The course is pretty monstrous… sitting at… 7,400 yards? Approx.

Although it’s worth noting they went with a graduated rough, rather than a typical U.S. Open rough.

With Brian Gay just qualifying (TGM Hitter) and some of the other accurate, but ‘short’ hitters qualifying, I’ll be curious to see what type of player wins it.

As always I guess its all about the context in which you are talking.

So in the context of the PGA Tour 2009 I have no doubt that players at Bethpage will be hitting clubs with lower numbers on the bottom than normal. Especialy if its soft and wet as predicted.

In a historical context I’ll be surprised if we see players challenged to use long irons in the way they were routinely in major comps in the persimmon era or even in normal tour events. Be interesting to see if anyone actually carries anything longer than a 3 iron these days, even at Bethpage? A lot don’t even seem carry that these days! Maybe we will see the odd hybrid used on a par 4 but I suspect that it will be more mid irons than “long” irons that get a workout.

So it will be nice to see a little better balance with some longer clubs for sure but for a real display of mastery of the long stuff (fairway woods and irons) I can recommend the Billy Casper vs. Doug Sanders Shell match from Brookline CC in 1966. That played at 7100 yards plus 40 odd years ago - a real toughie!

Well I won’t argue with you Arnie, but still I’m hoping to see guys using those 3 irons from the fairway. That really doesn’t happen much it appears.

I want to see the fairway three irons, I also want to see some of these hybrid guys using a 3i or what not. To me there are a surprising number of hybrid users on tour.

I’m not to sure about graduated rough at a U.S. Open… I always think guys like Zack Johnson, Steve Stricker, and Jim Furyk to name a few, would better appreciate non-graduated rough.

Zack won the masters by going for all the par 5’s in 3. Let’s see if some of the big swingers on tour have the ability to put the ego away on Bethpage Black. Will the course layout punish those that go for it, and are errant off the tee?

That Shell’s match you speak of was really something…
How about that first hole, both Sanders and Casper hitting fairway woods into the long par 4.
They both strike beautiful shots onto the green… great stuff.

The guys on tour now rarely even use long irons into 5 pars for second shots.

Given the near 20% increase in distance from years past, I still don’t think courses are long enough.
The classic US Open course of the past say a 6800 yarder, you mulitply that times 20% and we get
8160.

If courses were that long, golf would very much be about the long game off the fairway, even for
the long hitters.

There was nothing wrong with persimmons and a 6800 tight US Open layout or the Masters for that matter.
It was great theater back then and would be now. Hopefully a new generation someday will see how silly
the titanium age was, once they realize how great all those masterful classic courses really were.

Well Lag, that’s why I say this might be a U.S. Open you will find interesting to watch.

The bombers are still going to have to pull out those long irons with (I think) 4 par 4 holes counting over 500 yards! It makes me cringe.

The thing I have to wonder about is will this make the game more competitive (simply stretching it out) or eliminate the field that can’t drive 300 yards? I’m not sure this is such a good thing. There are some very good ball strikers (I mention above) that won’t have a chance on those par 4’s for instance. Alternatively, can’t a course be ‘hard’ without taking the easy way out and simply adding yardage?

Still, it should be a show worth watching, especially with the added rain challenge that seems to be for casted for the whole tournament.

I watched a bit of the third round…

Knowing that it rained and all… I saw balls backing up on the greens from the first cut of rough.
I saw balls holding from the second cut…
I saw Duval hit it stiff after a wild drive off the trampled down straw…

With the greens that soft, and true, same ol thing… bomb it… gouge it out… stop it… putt the lights out…

I remember US Opens, guys literally having to pitch it out of the rough and layup short of the greens… then have
to try to save par from 100 yards or so out…

I think about my US Open Q site Mayacama,and I couldn’t hold the green with an 8 iron from the center of the fairway! Even a wedge…

Now that makes it tough…

This was easily the most forgiving US Open set-up that I’ve ever seen. Now, some of that could be do to the massive amounts of rain that they got which softened the course up considerably, but the greens are monster and the rough was MAYBE a half-stroke penalty when missing the fairway, even from the secondary cut. Case in point: Ricky Barnes on the 2nd hole in the 4th round from essentially in the trees hits the green after a horrific tee shot. Seriously? US Open rough? He should have had to play that shot straight sideways and have a 100 yd up-and-down for par. Instead he almost made bird. Sorry for the sour grapes, but the fact that he was even able to attempt that shot made me sigh.

Hopefully next year at Pebble is better, but I don’t like that they’re making changes to the course. Pebble is (was) one of the last great sub 7000 yd courses. Shame. That rough better be barbaric.

I never saw anyone pitching out sideways from the second cut like they used to. Duval hit a drive
way off line and was in fine shape on the padded down grass from the gallery trampling.

It’s the only thing that makes sense to me… Keeping some of the great 6800 yard courses of the past
still relevant I think is a noble concept worth consideration.

Here’s Hogan having a swipe at his ball on 18 in the 1955 US Open playoff that he lost to Jack Fleck at Olympic. This poor drive cost him any chance of winning. Apparently his foot slipped on the drive. But he took 2 shots to get back to fairway. Talk about hitting out of the hay !!
Imagine the complaints if the rough was that high these days. 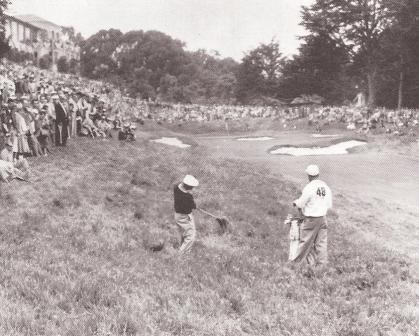 That ends that topic…