I’m sure this has been posted, but this explains it all… youtube.com/watch?v=43ms93iRSiA

Super !!
Have really come to admire Lee’s swing… remember as a kid watching him play on the tube and all the flack he’d catch
from the TV commentating ‘experts’ on his swing… Lee ‘really knows’…

There’s a nice image to keep in mind: 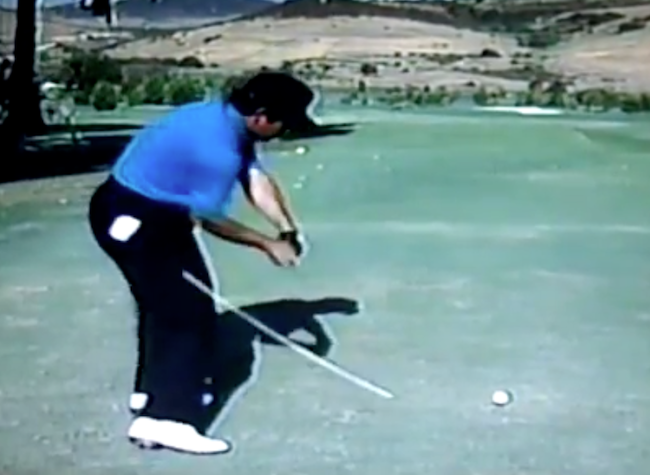 There’s a nice image to keep in mind:

You bet… Shallow approach, hips and shoulders leading, clubhead lagging behind… It’s what he does through the shot that catches my attention, that ball is not going left…

love the bowed left wrist coming into impact in that picture. wish i could do that. seems like i get a cupped wrist for some reason.

Jpd have you tried starting with a slight forward press when you set up. I think this the best way to create the bowed left wrist. I feel the upper body takes the club up to the top, without manipulating my wrist. I try start the downswing like Hogan, begin it slightly before the backswing is done. The hips do pull, but I feel before that it is a weight shift to the left foot, knees go toward the target. The slight bow with the forward press becomes the bow you see in Trevino and Hogan after trasition, if you transition this way it will become the full bow. Then the body rotation you began brings the club into the impact area for the forearm rotation to fire. This is what Hogan meant when he said there was no timing in his swing.
Look at the thread lag started called Knudson on Lateral Movement, this give a good description.

I’d be careful trying to bow your left wrist intentionally whether at address or anywhere in the swing… It’s a position within motion that not everyone needs or can do, and I think Lee and Ben did it unconsciously as an anti-hook move with excellent rotation…

I think we mean the same thing fontaine, not trying to get anyone on the wrong path. You said its a position within motion, I am saying its a postion created by the motion of the pivot. I agree with you excellent rotation is required, the better your rotation the more likely you are to get it.

The reason I said slight forward press is because jnp said he had a cupped wrist for some reason. I think the reason is pivot stall, everything that is wrong with the arms, wrist, and hands is a secondary problem. Hitting by ABS protocols the pivot is primary, first and all important. For there to be a secondary problem, something must go wrong firstly with the pivot.

The reason I said to set up with a slight forward press is because I see many players that start with grip behind the ball from face on, most do not notice until it is fixed. Are you an ABSer jnp, might not make sense if not but there are many great guys on here that can explain. You could not go wrong with listening to fontaine, two course records with persimmon is impressive.

The FLW or even an arched wrist through impact must be created by forces and pressures. It’s a vapor trail of proper acceleration of other things.

There is no sense in striving for it directly. You will notice it improving when rotation gets better and pivot and forearm strength and speed improve.

Well said Lag and thank you for the compliment Flatlies, Hogan set up with his hands directly below his sternum with a vertical shaft, a little forward press is fine, but we tend to think and overdo things because of still pics at impact… If you do forward press too much you’ll lose left arm connection right off the get go and will make you tilt instead of rotate… (Rock and Block) Lag, if you don’t mind me asking, through the ball now I “feel” as if my hips and shoulders are wide open post impact and the ball is starting online and my misses are very manageable, does that mean my clubface is more stable? Now I know what Beg Hogan means when he said “Reverse every natural instinct and do the opposite of what you are inclined to do, and you will probably come very close to having a perfect golf swing.” … One thing I realized was after Bradley gave me a post impact tip, is I was very flexible in the backswing, but lacked rotation through the ball… It’s getting there… Cheers guys.