Thanks NRG for firing this over…

Some good tech stuff on swing weights…
well worth the read…

According to that Doc.

Thank you! I looked in that doc and couldnt’ find it, but then again, I probably didnt’ look hard enough. Great document! Much appreciated!

Before you cut the shaft you can get a pretty good idea of what a lighter swingweight would feel like by just choking down a half inch on the grip. It’s how us old-timers do it. It’s not a precise method rather a quick check. Heard somewhere that Bobby Jones’ hickory irons were measured with modern equipment and all but the 8 iron were the same swingweight. Pretty cool in that he would have had to check those things by feel.

Sorry. Should have said choke down a 1/4 inch to get the approximate feel.

Perhaps not in keeping with the swing weight advice of this thread but I read James Dodson’s Ben Hogan: An American Life last weekend. He mentioned that Henry Picard gabe Snead a George Izlet (spelling) driver that was E8!

Thanks guys for the advice. I’ve also though of chocking down some to see what that feels like. I have a feeling I wont’ be cutting it at all. When I received the club back in November I noticed it was about 44.5 inches long (w a s300). After hitting only 3 shots with it , the day I got it, I said to myself “you not doing anything to this club”. It was that good. Luckily I think the shaft has enough flexibility in it, that a D5 SW doesn’t feel bad at all. I really like the feel of the head on this one. (Its my Natural stained 9 deg Texan).

Here is an old article I just found in a Golf Digest from 1969. Thought it was good info to witness about how these players had their drivers set up back in the late 60’s 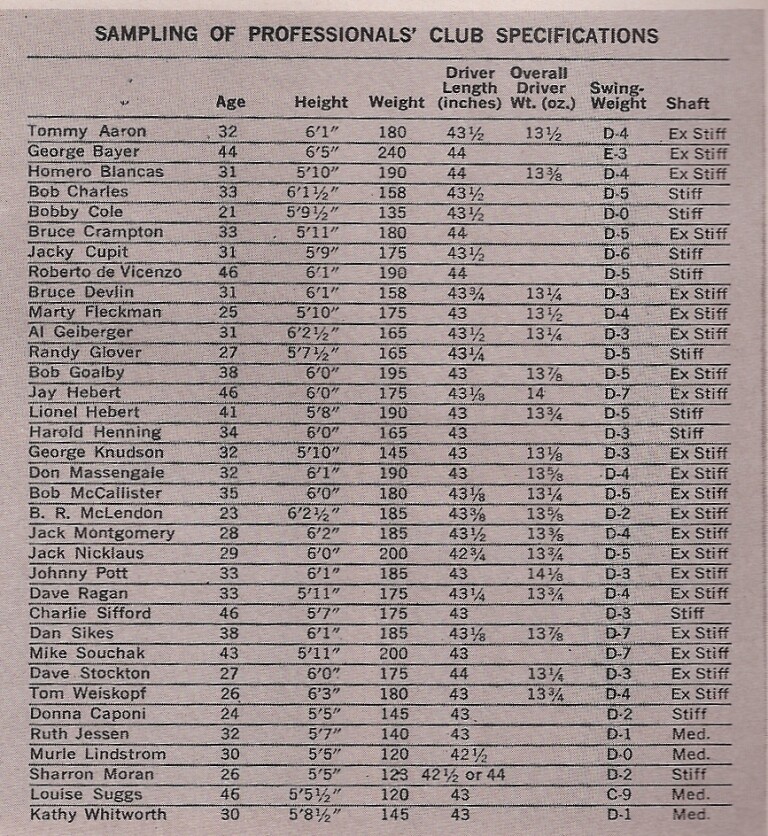 From a players standpoint… it’s pretty clear where the sweetspot lies regarding dead weights and swing weights, shaft lengths and so forth. 13.5 ounces, 43.5 inches, stiff shafts or X all will get you close. Tweak to your own feel specs from there.

I tend to favor the heavier side just a bit because I believe that your body will adjust, strengthen and ultimately accommodate a tad bit more weight. The physics of impact laws are not going to change. Lightweight shafts are fine as long as you re distribute the weight into the head.

A persimmon head without a chunk of lead in it is going to be very light. This was all experimented with a long time ago. Lightweight clubs are nothing new. These guys played heavier gear because it worked better than lightweight stuff… even back then.

Speaking of SW. I went and picked up some lead tape last week as reading through this forum I got the heavier bug. I have actually been hitting my blades pretty decent for myself up to that day for about 2 weeks so I don’t know what possessed me to tinker. I added two swingweights to each iron and had two horrible range sessions and then a horrid round immediately after this change. I tended to hit fat much more and also couldn’t quite get my ‘rhythm’. I also felt a bit more spent towards at end of bucket. I got so po’d that I ended up ripping off all the lead-tape in middle of that round.

Has anyone else experienced negative with adding weight? So my question is was this to be expected and I should persist in the goal of heavier as rewards will come later? Or is it that whatever my irons SW is currently is best for ME and I should find out what it is and be happy I quickly discovered my ideal?

It’s typical for negative results to materialize anytime you “change” from your normal routine. I would never just go out and play with heavier clubs without working them into my module work first. That would be for shafts as well as lie angles.

I don’t believe in quick fixes. Heavier gear, stiff shafts, flat lie angles… as I have said before, you have to earn your way into this stuff.

It took me 6 months before my divots leveled out when I flattened my lie angles… meaning they leveled out to the point that I didn’t have to think about it or anything.

There is stuff I am working on now that I won’t discuss here for another 6 months.
Just better ways or more efficient ways of doing things.

Maybe it’s me, but I am a very thick skulled slow learner.

I recently jacked the swingweights on my irons up between 3 and 5 swingweight points, depending on the club. I HATED it at first, but after a few days, it felt comfortable. I am now about ready to get them all up to at least D6, and add more weight just below the grip. Heavy is your friend, but it sure feels weird at first (as does anything). Now I just wish I could buy some x-500’s or something like that.

What was that dude a friggen’ sasquatch or somethin’?

What was that dude a friggen’ sasquatch or somethin’?

I recall Greg Lavern in his interview with Lag, said that Moe Normans driver was around E6, and Greg himself has all his clubs in the E range

I’ve heard Moe in several videos say that he swings E3 swingweight. I’m not sure whether that’s throughout the set or what? He didn’t specify.

Man I wonder what Geo’s sand wedge swung at? F3!!!