Rotating the head in the downswing

What do you think of rotating the head during the downswing - e.g. like Sorenstam, Duval, Appleby.
How does this actually work, do they still see the ball at impact or is it out of their peripheral vision?

I imagine the one big advantage that move has,is that it is easy on your neck (from a health perspective)? 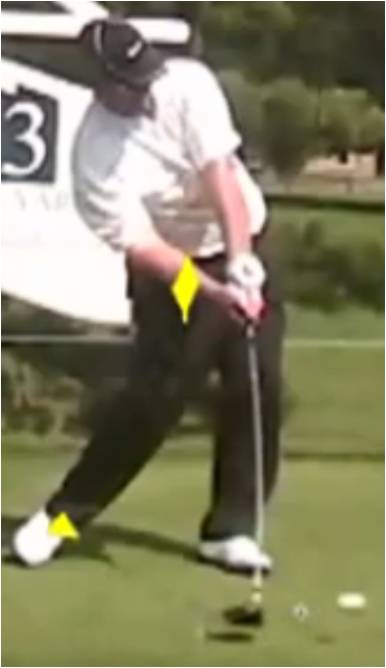 My feeling is that this can aid in a player’s ability to rotate flat or more level with the shoulders going through which is a very proper move. However, it can still be done without rotating the head. I suspect it could have to do with dominant eye also.
It would be interesting to know if they are both right eye dominant.

I feel this falls more into personal style, and could work very well for some players, and not so good for others. It certainly has credibility as a method.

If this does not disturb spacial awareness, I don’t see a problem with it… especially if it encourages the flat shoulder rotation.

Turing the head like Duval and Annika is really a lot of fun. For those that don’t know the reasoning behind the move is that in other athletic activities like billiards, free throw shooting, etc…the last thing the eyes do is to acquire the target…in their case maybe a weed about 2 feet in front of the ball.

That’s what they are doing. If done properly you will actually see a white vapor trail streak post impact that is about 2 feet long. It really looks cool to see that. Takes some work however when first starting to fiddle around with it…but once you see the white streak the first time, you will know what the timing is on when to let the head start turning.

I can only speak from my experience. I rotate my head just like Duval, Sorenstam, etc. and I assure you it is NOT planned, drilled or intentional! I’d hazard a guess with 99% certainty that the pros do not intend to do this “move” either. The first time I saw video of my swing (and even practice swings!) - I noted I had this exact trait.

My head just goes where it goes and I see impact just fine…I think.

Btw, I am right eye dominant.

I don’t think Duval or Annika see impact…their head is already turning downrange prior to impact and the ball velocity catches up to their eyes. Do you see a white streak about 2 feet long post impact? 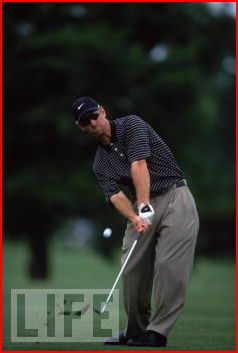 I have always thought Robert Allenby turned his head into impact as well. I’m sure the oldies at my club would be telling David Duval to keep his eye on the ball longer… Always amuses me. 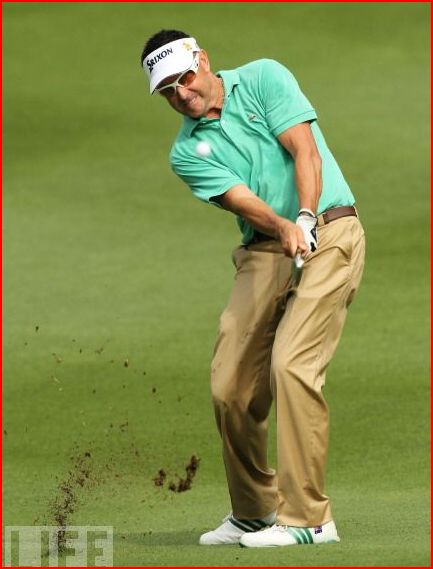 Rob’s head moves certainly…probably not as much as Duval…but he does follow the flight sooner than the ‘gurus’ tells you to!!!.. It’s a great rotation move and shows that ‘keep your eye on the ball’ is a load of baloney
Well in hindsight …he IS keeping his eye on the ball…if you examine the pics closely 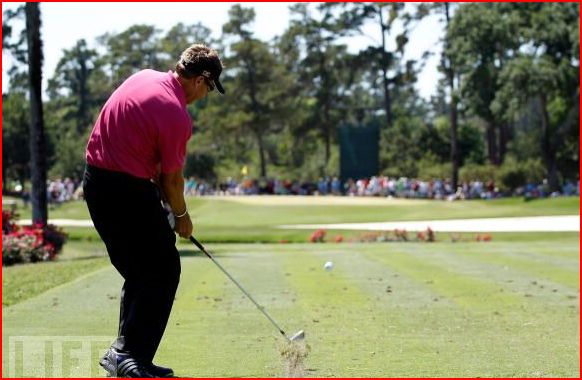 Great topic! I don’t know if we are on the same page or not however. But I agree Two, the proclamation to 'see the strike" is something a lot of people strive for which I don’t think is the best advice. In all my years I have never “seen the strike” in a strict sense of the word unless I deliberately do something with the nogging to make sure that I do. The result then is horrible: the pivot motion feels blocked and everything flips like crazy.

But the guys being mentioned here start turning the eyes downrange as the hands come out of P3- almost like putting looking at the hole…in contrast to Hogan whose eyes were moving more in conjunction with the pivot out of P3 and working in more harmony with the action and not ahead of the action.

Question for you guys…how many actually see the strike of the ball under ABS protocol…and does anyone see a white vapor trail whether or not you think you rotate your head like these guys do?

I don’t think Duval or Annika see impact…their head is already turning downrange prior to impact and the ball velocity catches up to their eyes. Do you see a white streak about 2 feet long post impact?

I’m positive I see impact. While my head is turned, my eyes are still picking up the ball peripherally (along with the flash of the clubhead). I have a vid capture, but no place to post the picture as I use vimeo. You’ll just have to trust me on that one.

I would not question the results of Annika, Duvall, Allenby…or our own RR , & CC. And certainly we all agree that there is more than one way to swing/hit. I don’t like to argue with what works…I like to figure out why if possible, and I think Lag’s post makes sense.

From an “opposing forces” viewpoint, if the body were a towel from the feet to the head, wouldn’t it seem that the head would need to be twisting the opposite way of the pivoting trunk and hips?

Hagen , Jones and many others are good examples of this.

Bertholy, Moe’s teacher, wrote that keeping the head back, even twisting it away from the target, was an additional power move, like the handle on a bull-whip.

No problems Eagle…even if there were, who cares

I still don’t think Annika sees the strike in a pure sense…it is more of a collecting move through the ball with some very precise timing involved on when the head makes that move downrange to look under the shot. Don’t know that I have the proper discriptive ability in words to illustratate what I mean…

…but the rat’s neurons are firing- what few there are- on this topic.

Hey Two…do you actually see the stike to the extent that you can see the ball being compressed on the face? I think in Duval’s case if he actually sees the strike, his eyes could not be that far downrange- as seen in the picture- by the time the ball travel is about two feet. By the time his eyes get to that position he displays, the ball ( had he witnessed the stike ) would be yards in front of him.

I saw a playing lessons from the pros with Allenby one time where he talked about one of his main swing thoughts being ‘releasing his chest’ through impact. I think that was the phrase, it may have been torso or upper body, but regardless, it’s a great thought for clean motion through there. I can’t remember the specifics of it, but it speaks to his head action.
Those photos are great, it’s really no wonder he’s such a good striker. I like his followthrough too, it’s kind of ungainly but it shows how hard he rotates and how in control of the club he is.

Hey Two…do you actually see the stike to the extent that you can see the ball being compressed on the face?

Not that I know of

I honestly don’t even think I watch the ball that intently when I swing.

I see it there…I know it’s there…so I just swing away and let it get in the way of the club
So much for focusing on a dimple…I would nearly bet my hat that most good golfers aren’t that focused on ball or impact.
Years of work and practice just allows you to swing freely through the shot without barely a thought… I think

sorry for all the smilies…

Thanks Two and Bom…For awhile there, I thought I was losing what little mind I have left. I like the feel description of releasing the chest. Spot on! RR

He’s doing something with his eyes in this sequence that I just can’t figure out, but it’s annoying the crap out of me, and it relates to this discussion…

"Ya got me Bom…what do you see? Looks like he’s hitting a tennis ball, or do I need new glasses

Maybe this sequence will show it clearer… it’s as if he’s moving his eyes or head or face ahead of the ball in transition. It’s hard to see in stills, but I can flick through them so they appear in motion and there’s a definite move of his head/eyes tied to the transition- whether it’s intentional, cause, or effect, is up in the air… It’s very interesting though
Yeah it does look like a big ball- I think it was around the time they were changing from the small ball… apparently they went a little far with some of the experiments 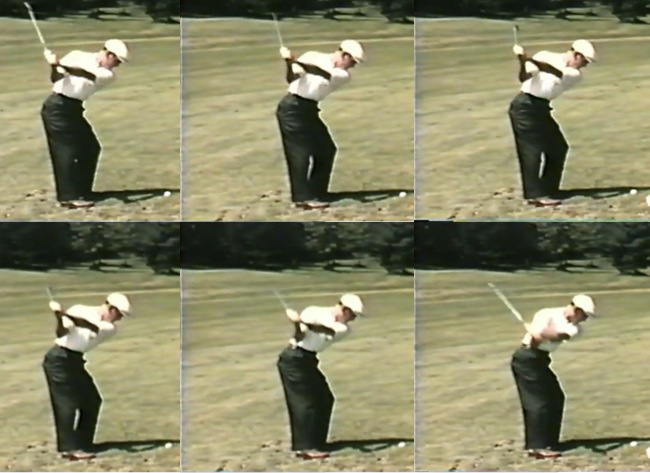