My first post but I’ve been an avid reader for five months now.

I have a Spalding persimmon driver that I was refinishing/reboring (flatter). It was painted black and I wanted to strip the paint to show the persimmon grain and show that it is actually a wooden wood. Some of the paint stripper seeped past the tape I had on the plastic insert and melted it where it touched

so now I have to replace it.

I have a couple of other persimmons and when I hit them with a modern ball they seem to slide a bit up on the face and not really get much backspin on. The hard plastic of the ball doesn’t seem to mesh well with the plastic of the insert. I remember the balatas used to bite on the face much better or at least I seem to remember it that way. (loved the feel of marshmallow putting

Macgregor used to do some with metal (aluminium I think) inserts. These TeeSoles being an example. 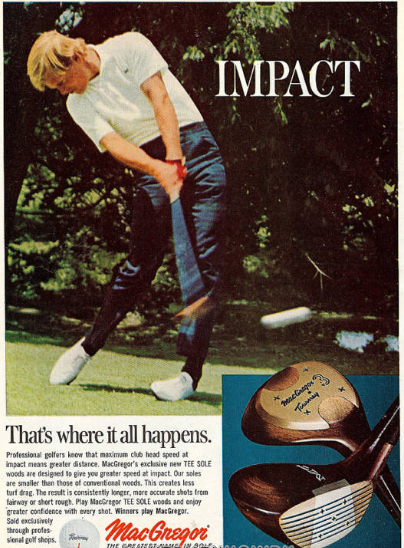 Joe Powell made a series of drivers called the Ti. They had a titanium insert in them. Think Ive got one somewhere!
Speaking to an ex pro they used to get aluminium inserts back in the days but not sure about any models or details.

Who was it said that the best insert was no insert!!