Does anyone know the original specs for 1962 Power Thrusts? I am looking to get them dynamically adjusted to my flat swing.

If I use a strike board the heel of the Power Thrusts hit at contact and most of my shots head left due to the upright clubs. I am presently playing early 60s Mac Tourney CF4000 with the Propel 1 they were adjusted 2 flat for me a couple of years ago. Looking to switch to the Hogans as gamers.

Looking for advice to adjust the lie and check the lofts and play those Hogans.

Go as flat as you can… just check your divots…
Also I would stay open to learning to work into flatter lie angles… you can bump them down gradually over months or just get them down to 5 or 6 right away and focus on sustaining more knee flex through impact. Don’t go down with just a torso bend.

The Hogan Power Thrusts are a great set also, and set a precedent for many irons that followed with the shaved off toe weight.
Great for a hitters club.

Make sure to remove the offset if you can find someone to do that properly.

Does anyone know the original specs for 1962 Power Thrusts? I am looking to get them dynamically adjusted to my flat swing.

Oldmacs,
I’m not sure if this is any help. I knew I had it in my files somewhere but couldn’t track it down. I have these blades so went looking for the numbers when I got them. They may work as a reference point to work from… 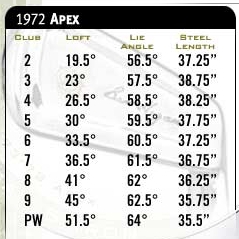 Here’s more info on the hogan line up…

Awesome IOZ…did you put that together or did you find it somewhere? What about the early model specs from the factory…are they somewhere floating around?

Awesome IOZ…did you put that together or did you find it somewhere? What about the early model specs from the factory…are they somewhere floating around?

No RR, I just found it on Golfwrx.
Someone over there grabbed the pics and specs from the hogan site (when it still was online) and put them into a pdf document. . .
Sadly not all measurements were copied but it’s still a valuable resource!

P.S. I have a set of the '57 precisions in great shape and original condition. I’d be happy to measure the lofts and lies (and lengths) for you if you like. Say the word.

Nice post of the hogan clubs…just to do a little comparison with 1972 loft/lie/lengths I put a pic below with todays Titleist AP1 specs and Taylor Made Burner 2.0 specs…things have changed 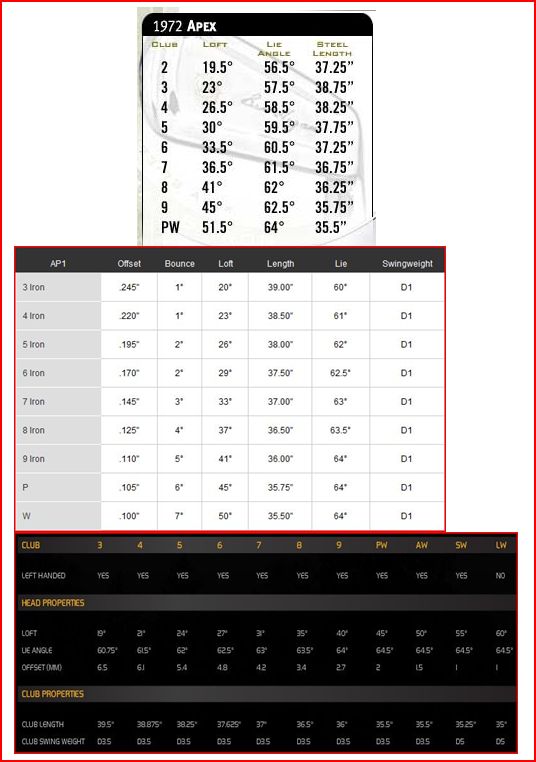 It’s staggering how bad the Hogan clubs became, even by the 70’s. He must have really become bored.

It’s staggering how bad the Hogan clubs became, even by the 70’s. He must have really become bored.

Pretty harsh critique NRG! You don’t think some/most of those 70’s designs are classic/timeless? If you don’t then I’d like to understand what you do consider classic iron designs.

Seems to me that Hogan stayed with his “blade on blade” type MB designs well into the 80’s. I’m sure he felt the need to pander to the CB design crowd over time, but didn’t every other manufacturer out there do the same? I’ve heard stories of the staff at Shady Oaks being quite meticulous with setting up displays of some of the CB models in the 80’s, only to have Hogan walk in and tell them to take “those” displays down and put “those” clubs in the back room saying something to the effect of “I know we have to sell em but we don’t have to display em!”.

I have both 70’s and 80’s versions of the Directors and I don’t like them at all, heads are to long and skinny. The ones from the 60’s look just great, but don’t come round much, if ever in the UK. The PCs are the only ones I have even taken out for a game and they don’t even come close to the feel of the MTs, with a real muscle back and a tiny short head, when you nail one of those, you can feel it in your bone marrow. 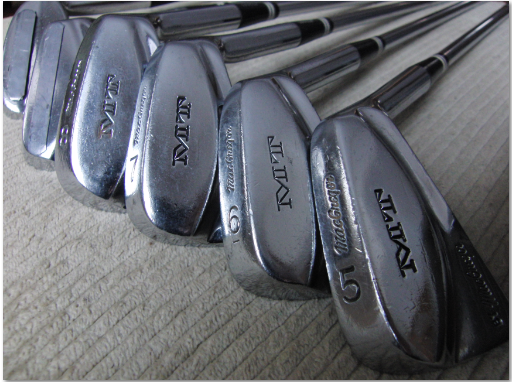 Anyone know the specs and year on the white cameo model? I’m presuming there is no offset also.

Did a little research which said it may have been the softest forged model produced. Just curious as a set is available near me that looks interesting.

I am pretty sure they came out in 77 or 78. Those were my first official “great set” that found there way to me via Santa under the Christmas tree. I remember how excited I was to take them out Christmas morning for a game.

I recently picked up this Hogan Slazenger 2 Iron. I have NO idea how old it is or any other details about it. Was hoping that one of you could shed some light on this. 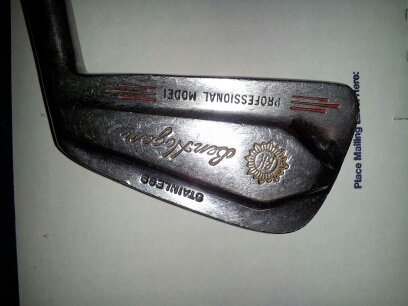 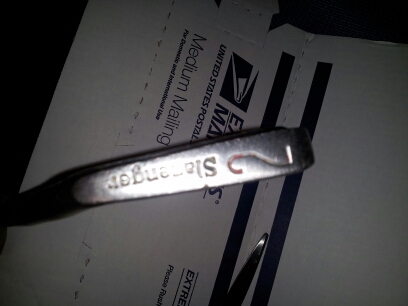 From what I understand, Slazenger was able to license the Hogan name to put on some of their forgings… but I don’t know for sure the details or the involvement of the Hogan company. Looks like a nice blade though!

I have a set of hogan percussion’s circa 1966 that I am fond of. Not long ago I saw a few
Of the identical irons in a thrift store that were made under the slazenger label. I didn’t
Pick them up because the set was very incomplete but one thing I noticed was that the quality
Of craftsmanship did not seem on par with stuff made in fort worth. The first thing I noticed
Was just the stampings were not deep and consistent and they did not have the pins in the hosels.
Just didn’t look right to me compared to hogans of that vintage.

All that being said I’m becoming a big fan of clubs with a big gob of weight right in the middle
Of the back, I’d more than likely give that 2 iron a whirl, especially teed low on the Texas hard
Pan I’m playing right now.

I too am living in TX, Austin area actually so I may try this iron in the wind…!

Oh, well, I will keep working through my Hogan Iron lot that I picked up to see what other gems I have here!! Only have about another 450 clubs to go!