At the 2012 Umpqua Challenge Trevino said he never hit a fade in his life, he hit a straight push.

His club is straight for 2ft after the strike. Bet that ball was on a rope! Interesting that he draws it now, probably easier on the hips and back.

There certainly is some great logic going on here. Everything is working towards shallow and a very deep 4:30 line, and the idea of looping from out to in with the body always limiting that possibility by getting in the way makes great sense.

Classic Trevino brilliance! Getting in the way has sure been around a long time. Elkington spoke about being told by Claude Harmon Sr. that Hogan and his friends worked on getting in their way so they could get get out of our way-

I like to swing along one rim on the way back, then drop the club onto a LOWER PLANE rim on the downswing. This makes the clubhead approach the ball slightly inside the original. The main advantage of this is that it insures that we don’t come down looping to the outside rim. It’s far safer to try for the inside rim on all normal shots.

Another advantage of the inside rim is that it moves the clubhead into a shallower angle of attack. It makes the clubhead approach the ball more like an airplane coming in for landing rather than nose diving in for a crash. The shallow attack sends the force forward not downward, which would cost you distance with the longer clubs.

Trevino calls this ‘reeling out’ but sounds like the same kind of deal ensuring a shallow inside move. 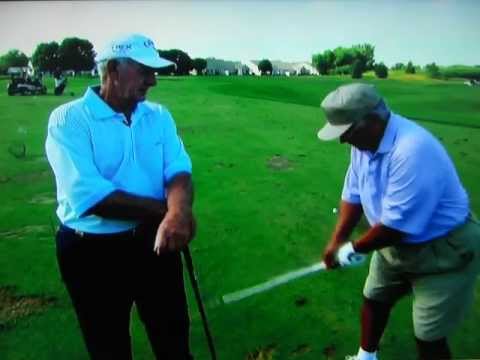 Great share RR! Swing has 2 planes for sure…cant get to one without space for the other.

Interesting the difference between the 2 images. Looks like he was doing a better job of that with the older gear.