Hey guys,
I recently inherited several old individual blades from my dad that were in pretty good shape. I actually remember these in his bag when I was a kid! I sent them off to Jim at The Iron Factory who re-chromed them, and did a fantastic job. This particular piece…obviously an Arnold Palmer 2 iron, I cannot find any information on. I am sure it is a First Flight/ProGolf made iron, but cant find any info. regarding details such as model, date of manufacture etc… I absolutely love the way this head sets up, and with the satin chrome finish, I think it looks as good as any Muira or Vega.
The symbol on the back is throwingme for a loop…it looks like the letters SR.

Any help would be VERY much appreciated! 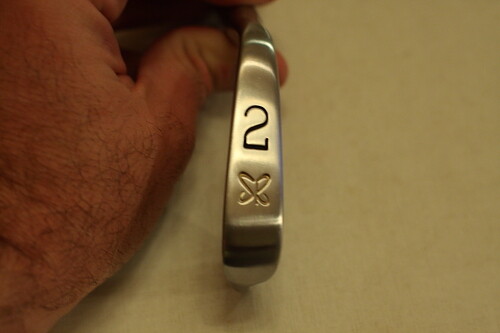 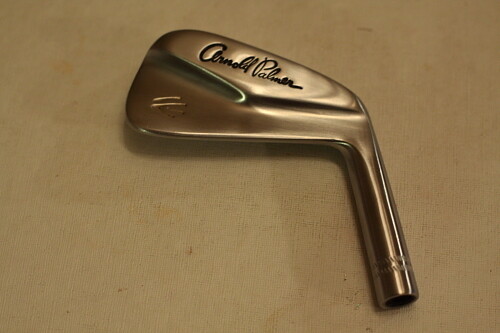 It’s obviously a spin off of the classic MacGregor M55 through M85 wing back series from the 1950’s.

Hey now two,
I have a set of Standard originals (1988) and they are gorgeous. Very thin top line and playable.

The rechroming looks good. I’ve heard some good and bad things about the Iron Factory over the years–let us know how they hold up. Also you wouldn’t have happened to weigh the heads before and after? I’d be interested to see how much weight was lost.

Hi Steb,
No, I did not weigh them…mainly I wanted to have these two heads re-chromed just to see the quality of work that Jim does. He did this Palmer head, and also a '68 Dynapower 7 iron head. Visually, the quality is fabulous…they did a great job. And I have to say, Jim was a really nice guy. He called back when he said he would, delivered when he said he would etc… he even welded and ground the holes where the pins went at no extra charge. I also had him flatten the lie 2 degrees, and strengthen the loft just a bit.
Over all I am very happy, but obviously time will tell how the job holds up. Couldn’t be any worse than the current quality of factory re-chroming though. I had a brand new set of Wilson Pi7’s I got a while back, and the chrome was rubbing off from bag chatter after 2 months.

I have an old set of Powerbilt blades I am thinking of having re-chromed in the satin finish…it’s quite sexy.

Hey now two,
I have a set of Standard originals (1988) and they are gorgeous. Very thin top line and playable.

Yeah I give some of them credit but the Axiom and the PHD models…WOW!!

The symbol on the back is throwingme for a loop…it looks like the letters SR.

Any help would be VERY much appreciated!

Sweet looking head. As Lag says it looks like a remake of the M75/85’s. I couldn’t find this head design in my resources.

The logo on the toe is interesting. Rather than an “SR” I bet the “R” is really a “P” (Palmer) but the 2 ellipses that cross give the appearance of putting a leg on the “P” making it look like an “R”. Very unique.

I had the Iron Factory do a couple of sets for me years ago and one set did show some chrome peeling later on. (I like the look of the satin finish more than the chrome). My understanding is that they do a copper under-plate to account for the weight loss you get due to removing material in the re-finish process (and that they’re the only ones that do it). I still think they’re the best out there.

Hey guys,
Got a hold of an old timer who has been in the biz for close to 40 years…he says these irons were made by GolfCraft in the mid sixties, who evidently did a bunch of these signature models (Stan Leonard, Lloyd Mangrum etc…) GolfCraft got purchased by Acushnet in the late 1960’s.

Can anyone here help me Identify these clubs. This set says faultless endosed by Lee Trevino ( Century models ) My five iron weighted in at 15.6 oz with green victory grips. so i added lead tape to the back and put them to 15.9 like my Dayna power ABS set. They are also one inch shorter then my gamer set. Just wondering if they are ABS worthy, 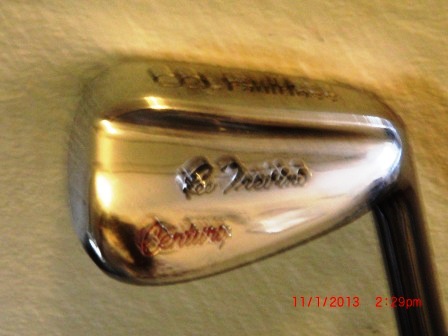 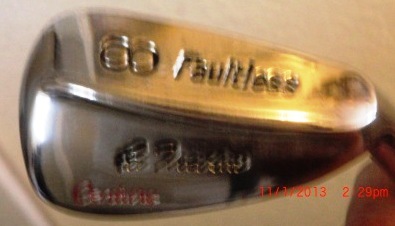