I’m referring to Heavy Putters, the company, not just putters-that-are-heavy. What does everyone think of them? Do you like the concept? Have you tried the putters? Do they work for you?

Thanks for your thoughts

How heavy are the putters?

Loren Roberts uses an 18.5 ounce beast. “Boss of the Moss”

They come in different versions. The original ones were right about @ 2 pounds. They are also face-balanced. They have since made lighter versions, presumably to appeal to a wider audience of golfers.

Heavy putters (all, not just the Company) work better on fast greens. Light putters work better on slower greens. Their new driver, the Heavy Driver by Boccieri Golf was pretty solid. Probably liked their wedges the best. Also liked the irons, but they were CB.

Does anyone know if the ABS putter is going to happen?

The ABS putting program is well underway in the development stages… I am working with a few test subjects and initial feedback at least for a couple of the more advanced students has been quite promising. It certainly fixed my own horrific putting woes. One student had two rounds making 7 birdies.
I shot 5 out of 7 rounds in the 60’s and had back to back rounds making 6 birdies… very encouraging. Wish I had figured this stuff out 20 years ago

Putting module #1 (beta) has been released and there are more to come. Once I have the program in place, the kinks worked out, and we have verifiable proof coming from significant student improvements, I will make the program available on the ABS site. It’s very exciting stuff… and I am already convinced it is golden… but I need to make sure it works for others… and not just me. It’s really for people that can’t putt. If you putt good, don’t mess around with a new technique.

Like other ABS concepts, it is based upon pressures, forces, physics. It is historically supported by some of the game’s best putters, and it certainly needs to work in a way that is consistent with other ABS intentions and concepts… all of which I believe it does.

Hope to have it out by June or July.

So is this an integration of technique and equipment modifications? If so, can you give us a hint of what equipment specifications are going to be for the suggested putter? (I assume heavier)

I am very specific about how I feel a putter should be set up.
I don’t want to jump into anything here until I can offer all the proper support for the putter and technique… because the club and protocols for movement are very intrinsically tied together.

The good news is that I plan to release all the putting modules at once for the course, because we are not dealing with the kind of intense muscular training and conditioning that we have to deal with regarding the golf swing. In putting we are not dealing with 80 pounds of CF through impact. The motions are much more simple and natural feeling. Not like the golf swing.

A lot of it is supported by Crenshaw, Aoki, and Bobby Locke among others.

Other than loft, as we get closer to the hole, our clubs themselves do what four things?

I imagine that your question was largely rhetorical, but I will venture some guesses, anyway

As for the other two, I am not sure. I would imagine they have something to do with deviation from the target line, but that’s just speculation.

How heavy are the putters?

Loren Roberts uses an 18.5 ounce beast. “Boss of the Moss”

My putter is 36 inches long and is exceptionally heavy compared to modern putters weighing in at a staggering 0.563 Kg (19.85 ounces) with an F8 swingweight. It’s even heavier than my Wilson R61 “Sandy Andy” SW and heavier than the branded “Heavy Putter”! It was made by J. H Busson but I can’t really 100% work out if this is the “Harry” Busson or his brother who was a player and clubmaker from Formby (Circa 1930…). I think it is probably Harry’s work as the signature matches that on the Busson persimmons I have.

Everything on this putter is original …

The shaft looks like a special for the putter, very thin compared to modern putters , and the grip is amazing … It is the original leather bound grip, in two colours of leather, dark red and black, and to create the flat front to the grip, it has been bound over a thin fillet of what i assume is wood , possibly bamboo or similar … its simply amazing workmanship.

For the most part I love it, though I still have occasional off days like anyone else. I think the length and weight make it ideal for Al Barkows dominant hand method which I use and like. I find I can’t really use any other “normal” putter now as they feel so light.

Interesting that Richie says the prevailing wisdom is heavy putters for fast greens and vice versa. My experience is the opposite, the mass of a heavy putter is great for slow greens but can be problematic on lightening quick surfaces. I wonder what the prevailing theory is based on? 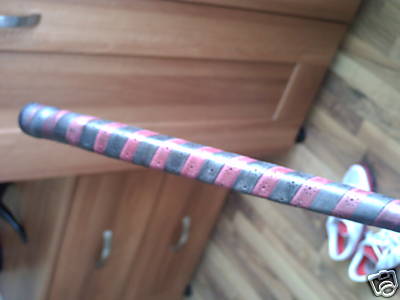 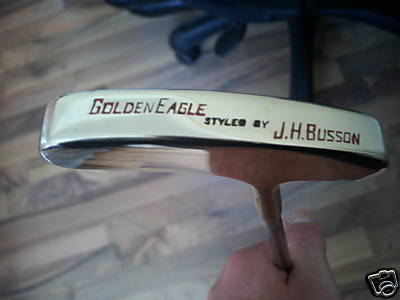 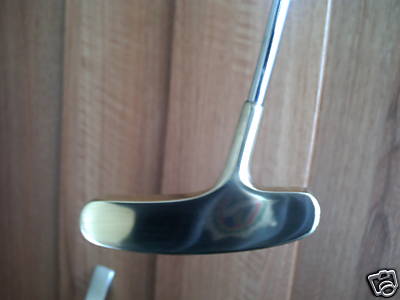 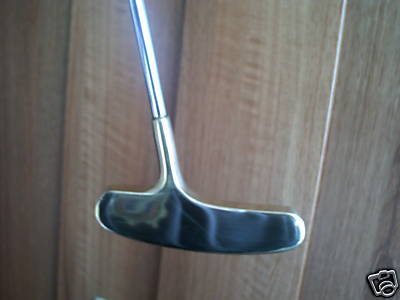 Thats a cracker of a putter Arnie! I like a heavier putter for the most part but am with you on the heavy for slower surfaces.
When I played Hunstanton back in the late 90’s / early 00’s, they used to get the greens to 14+ on the stimp meter… seriously quick. Used to bag a bullseye just for these greens.
Could at least throw the ball a body swerve and hope for the best on down hill putts!
They are a little more sensible with speeds these days otherwise I would have gone mad years ago!!

Going to try a “heavy” bullseye this year and see how that goes!!

It seems intuitive to me that a heavy putter would be better, regardless of green speed, because it makes your stroke steadier. I think this would actually be more of a premium on faster greens, when our strokes tend to get shaky because of subconscious fears of blowing it by the hole. That’s just my thought, though.

I don’t see any disadvantages to using a heavy putter.

You either believe in the pendulum concept or you don’t.

but now I don’t

Does anyone happen to know what the weight of the head on a Tommy Armour Ironmaster is? (the IMGL model)

Err, not the L, as in Ladies, model. Just the original ironmasters. I presume the ladies model would have been lighter.

“Seve gave me a great putting tip before a tournament at Sunningdale (on the outskirts of London) and I remember it vividly,” said the 53-year-old Langer, who is regarded as the most successful German golfer of all times and has won the Masters twice in his stellar career.

Langer recalled of how he was engulfed in a terrible run of bad putting when Ballesteros eventually decided to walk all the way to him and took his putter, trying to get to the bottom of the problem. He weighed and swung the putter a couple of times and handed it back to Langer, before walking away saying, ‘Terrible, terrible’.

Langer, who apparently could not understand what was so terribly wrong with his putter, asked Ballesteros to at least tell him what was wrong with it.

“I said, ‘Hang on a minute, why is it terrible?’. Seve had already won the Open in 1979, I hadn’t done a whole lot at that point, so I wanted him to explain what was wrong with the putter. ‘It’s too light and doesn’t have enough loft’. So I contemplated what Seve said and I thought he might be right.”

Langer then went over to the equipment shop and bought a new putter for him and went over to finish third in the event. He posted a runner-up finish in his second European Tour appearance and won his maiden title on the tour at the Dunlop Masters at Chepstow in Wales. The 53-year-old Langer considers it as one of the greatest tips he ever got from any of the golfers, one which helped him soar to new heights in his career.