Lag or any other Hogan experts out there,

What was the idea behind or the reason for the naming of the “Bounce Sole 1+” design? Seems like many of the older designs look to have no bounce at all with very flat looking soles. Was Hogan just adding some bounce to these irons?

The soles are not wider, just a touch more bounce on the bottom… not much though…
The 1+ I don’t know the answer… I’ll ask Ron Chalmers next time I play with him…

I have a set of those

Me too. Just grabbed a 2 iron off ebay to round out the set. Pretty banged up but they have character.

Just had Apex 4’s dropped in my set this week and had them bent to 5 flat and “stronger” lofts (48 with the PW and 4 degrees off of that). These look sooooo similar to my Hogan PC’s at address… very clean w/out a bunch of offset.

I put x100s in mine. Found a set of ipts on craigslist that should arrive soon. Ill post some picks if they’re worthy. Supposed to come w Hogan persimmon too.

were the shafts in yours pinned CD?

Mine are pinned and while I would love to stick stiffer shafts in them, part of me loves the fact that they are so original just now.

The ‘equaliser’ in my set seems very weak lofted, maybe 50 something degrees.

Mine do seem to be a little offset.

I don’t know if this was ever posted in the ISG Classic Club thread, but if you go to benhogan.com and tab on the “Hogan Legacy” you can get the “Iron History” which shows all the Hogan club designs dating back to 1950 (3 view pics of each). They also include the specs on the 1980-89 designs (not sure why they do it for only those).

Styles… considering the 84 PC Equalizer had 50 degrees of loft, I would bet yours is the same (or even weaker?).

were the shafts in yours pinned CD?

Mine are pinned and while I would love to stick stiffer shafts in them, part of me loves the fact that they are so original just now.

The ‘equaliser’ in my set seems very weak lofted, maybe 50 something degrees.

Mine do seem to be a little offset.

Styles - sorry for the delayed reply. Yes, mine were pinned. Probably nothing you don’t already know, but the epoxy from those days was inferior to what’s currently available, so I didn’t repin. I put masking tape over the holes, filled them in from inside the hosel, and waited for it to dry. Some paint the epoxy fill to make it look pinned, but I didn’t take that extra step, partly b/c my set is pretty banged up.

Here are some pics of the IPTs I got a week or so ago off craigslist-- just preparing them to take the pins out. They’re beat up also, but the heads are substantial weight-wise, and, although the gooves are somewhat worn, still playable I think. The persimmons that came were pretty dissappointing – totally trashed unfortunately. 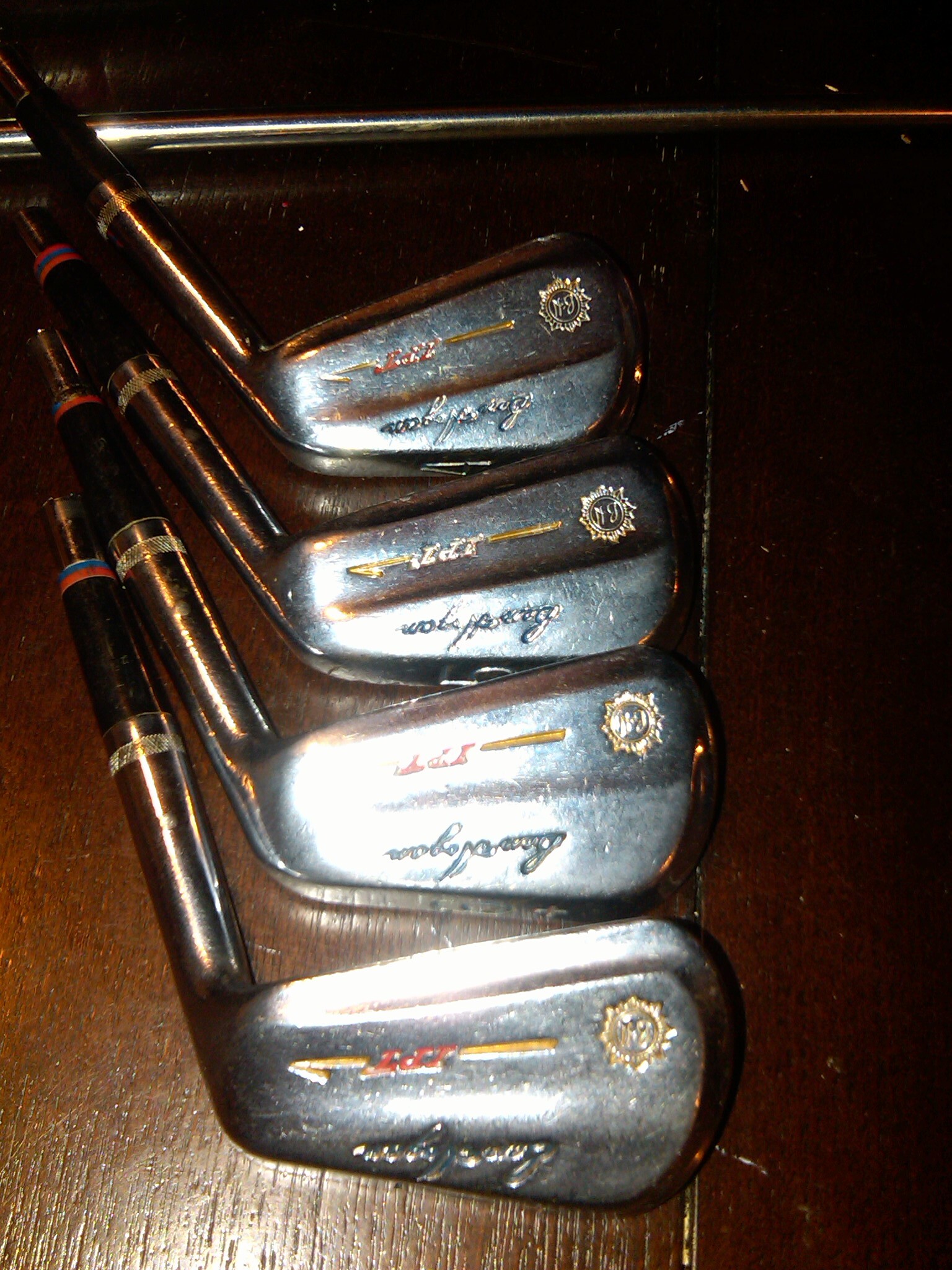 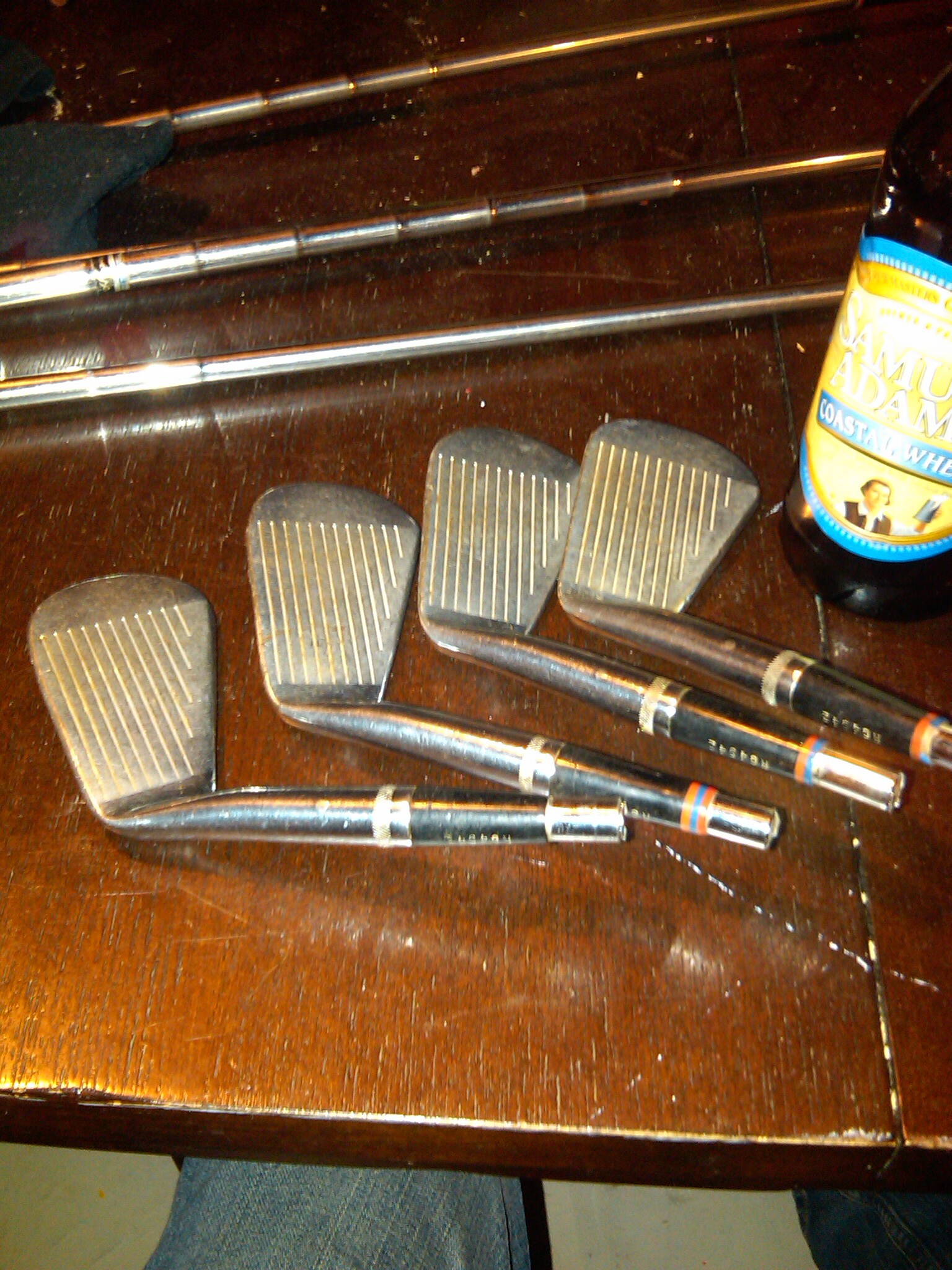 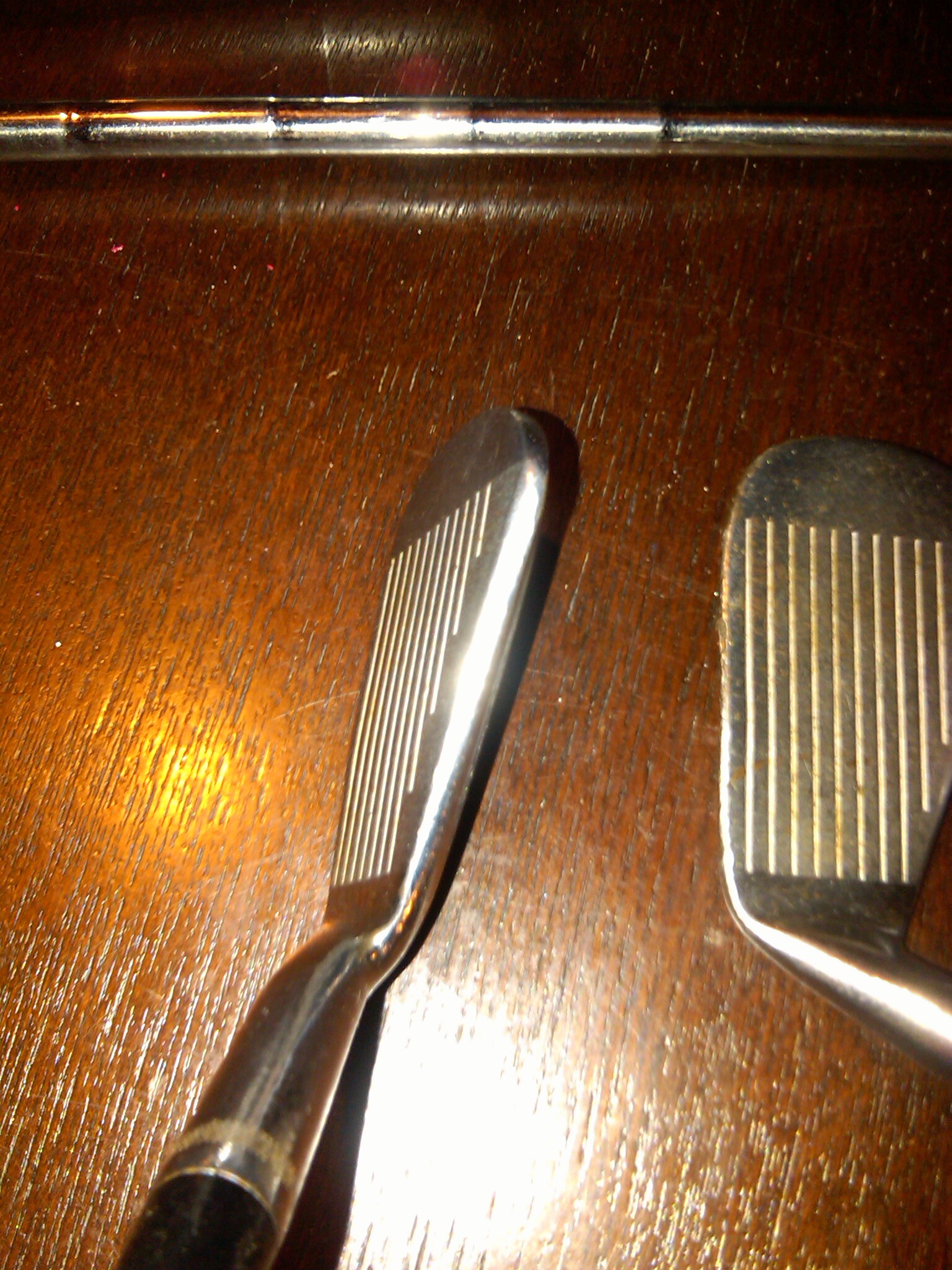 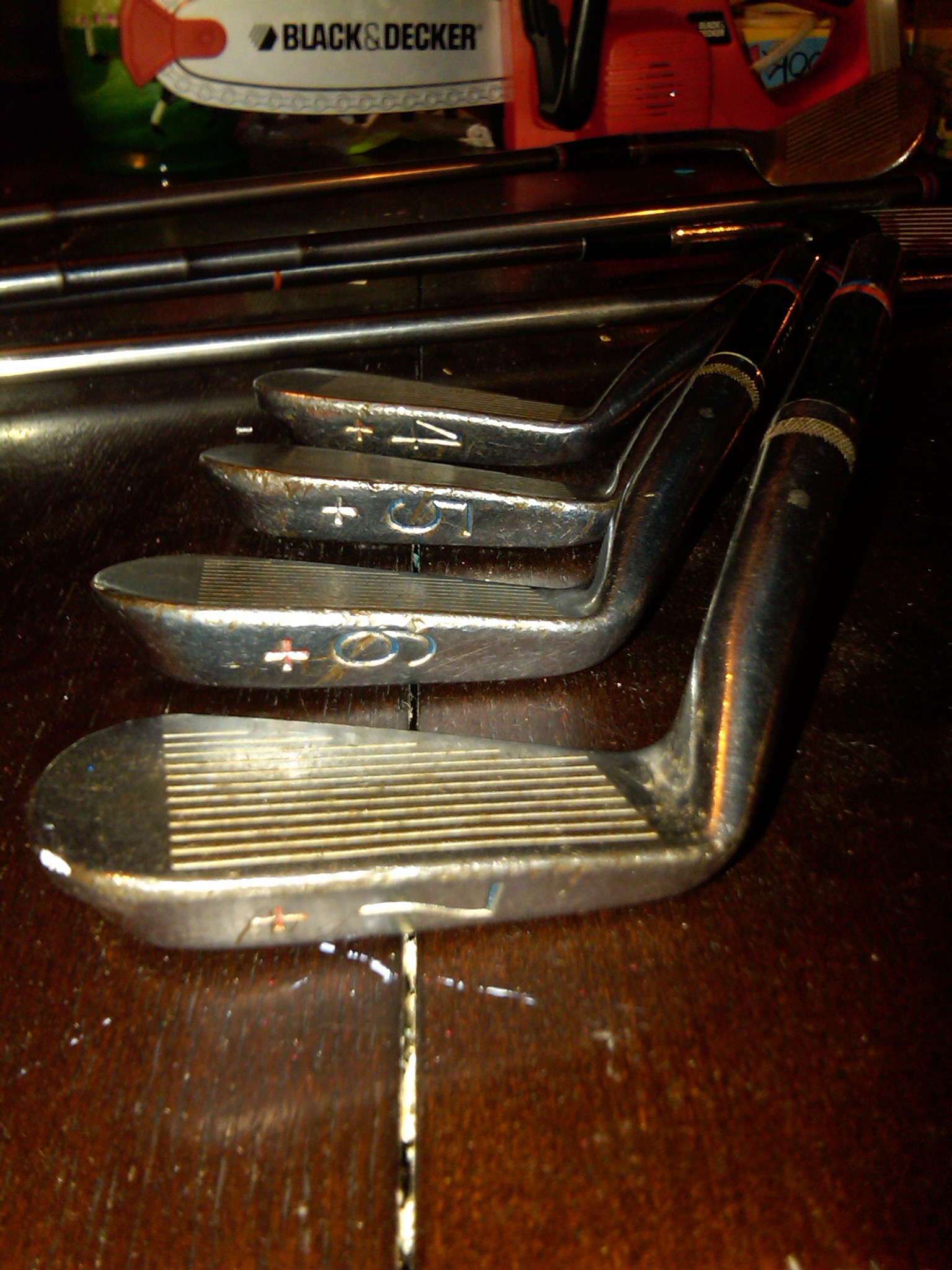 Finally picked up my Bounce Soles after the reshafting and adjustments and hit the 6 iron tonite. Are you kidding me!!! That thing was so solid it was scary! It swingweighted out at D-6 and felt as good as any iron I have ever hit.

I’m beginning to think that the older the model, the heavier the swingweight. Those cats sure knew what they were doing! I can’t imagine any modern day iron I’d rather play than the sets that are in my rotation right now… and I have nothing newer than 1984.

I don’t know if I’m doing something wrong, but I couldn’t find anything on the page that link took me to, showing pics and descriptions of all the Hogan irons dating back. All I found was something taking about all of his PGA tour wins.

I know you asked the question years ago… but, here is an ad that explains the +1 on Hogan irons.
(marketing of distance has been around a while 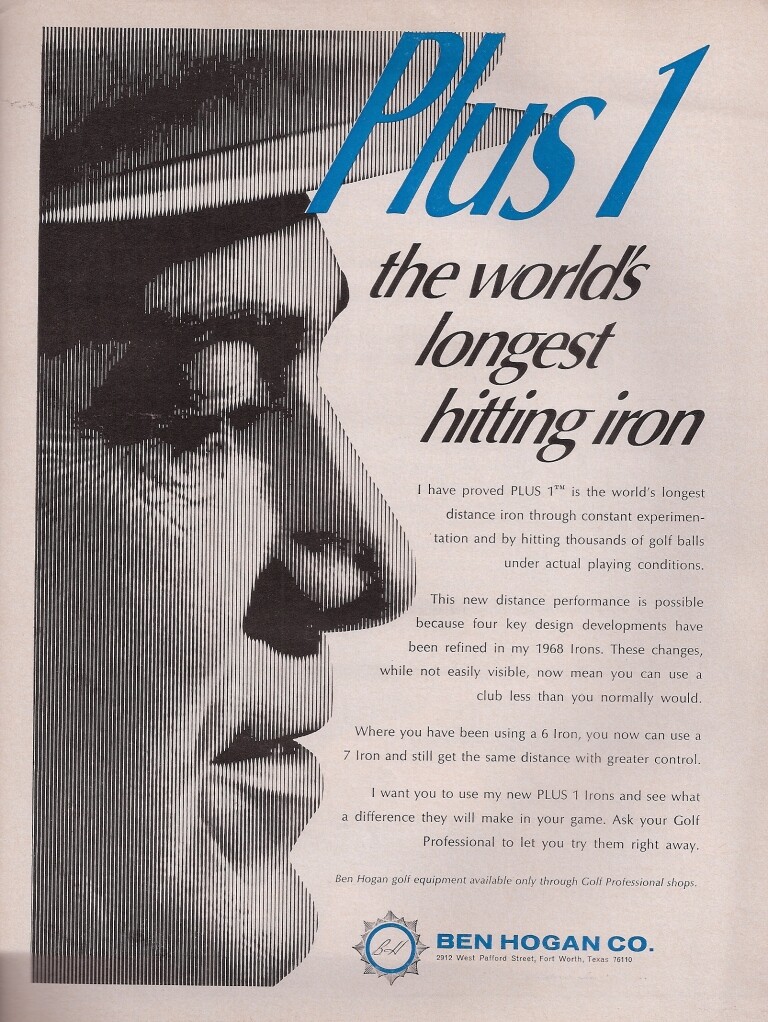 An interesting pic for y’all 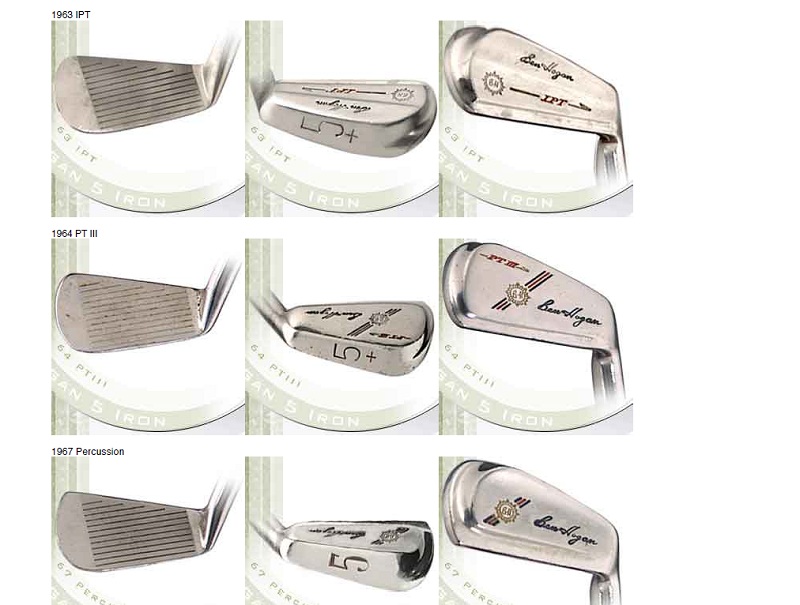