So I joined the program a year ago this week. I have never been a golfer and I’m probably not one yet. What I have been, however, is an athletic hacker with some ability to swing the club hard. Despite this, without anyone to teach me how to strike a ball or play the game, I was floundering.

Joining ABS, I have been fortunate to find John Erickson, Bradley Hughes, and their crack team of advanced ball striking golf nuts who have gradually and patiently provided me the the knowledge, experience, and insights necessary to allow me to begin to become a golfer. In the past year, I have progressed through six modules–maybe a little fast, but partly by design. Being so overplane to start, my goal was to get to modules five and six by the beginning of winter so I could drill very hard at these two modules whilst not hitting too many golf balls, in hopes of leaving OTT behind forever. The results, in terms of ball striking and still shot images are, well, striking. Perhaps the most amazing thing about this is now realizing how unavoidable the requirement of TIME is to allow changes to seep in. The swing thought and imagery I use now I first thought of in May or June, but when I tried it hitting golf balls, I couldn’t make it work. My body simply wasn’t ready to accept it. Eight months of drill work later, I use this same exact swing thought and the results are so different…

There is a lot of work to do to produce the consistency in ball striking that I would like, and I have not yet begun to even really focus on short game, putting and scoring, but certainly, I have gone a long way in making changes that will allow me to begin to become a “golfer.” I would encourage any lurkers unsure as to whether ABS is for them to consider how unlikely a new R11 driver (US $399) and irons (US $999)–and don’t forget the hybrid (US $199, total ~$1600)–would produce the following swing changes: 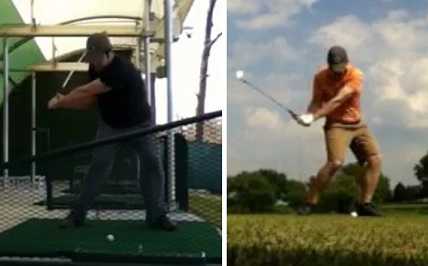 Despite you’re comment about not “getting it” even as recently as 6 months ago your posts and related videos/pics that expressed your intentions along the way have likely impacted more students than you might ever know. You’ve been a sharing and quality pupil.

Despite you’re comment about not “getting it” even as recently as 6 months ago your posts and related videos/pics that expressed your intentions along the way have likely impacted more students than you might ever know. You’ve been a sharing and quality pupil.

This is a fine compliment, especially coming from one of the senior members–so thanks. One of the most important things I’ve learned is the importance of reading and sharing. There may be 20 descriptions of a particular feel or sensation that don’t make sense or click for you, but then you read that 21st and suddenly that description becomes something you can use. Slotting the club has been one of these situations for me…

wow! those pictures are worth 1000 words AND dollars!

the pic on the right looks all too familiar to me. i’m on mod 2 and i’m excited that the pic on the left is what i have to look forward to.

i also like your comments on the value of time/patience as well as reading about different feels from others. spot on. not all will
work for everyone, but if you look hard enough you will find one that works for you.

one thing that attracted me to abs was the fact it was off the course drill oriented, not range ball oriented. i look back at all the lessons i have taken and now realize how they were never going to work long term. just band aid stuff. that is partially my fault, i never worked continuosly with the same instructor.
i used to feel guilty not going to the range. now i just pound the bag a little while and i feel i’ve done more to help game (and saved 8 bucks).

the drills are really allowing me to make dramatic changes. i looked at video of my swing from 3 months ago and my hands are now like 4-5 inches ahead
of where they were at impact back then. that’s insane! no way that happens pounding range balls for 2.5 months.

as we say in texas, drill baby drill…

Good luck and keep drilling. One thing I didn’t mention is that these changes occurred in the setting of welcoming our first child in August, so I’ve not been hitting all that many golf balls–mostly module work when I could steal sometime away from the baby! Another beautiful thing about this program…

as we say in texas, drill baby drill…

Unfortunately, you may say that, but until we get a new administration their will always be some F’n lizard, owl, minnow or fern that nobody has ever seen before that will keep us from using our own resources!

Back to ABS. crr, that is excellent…absolutely excellent. Wait 'til you get to module 8. It really does keep getting better and better.

It’s been said before and I’ll say it again. ABS works because you are building your swing. This isn’t a path to a system…it’s a system to the path…for the individual. Only P3 to P4 is likely to look similar.

That is a drastic improvement crr. I’m sure there are a lot of very good players who would like to be in the positions you are in there.

Drastic improvements, but I have so far to go still. I’ll try to get some comparison pics up soon.